2021 Ms. Olympia Predictions – Who Will Take The Crown? 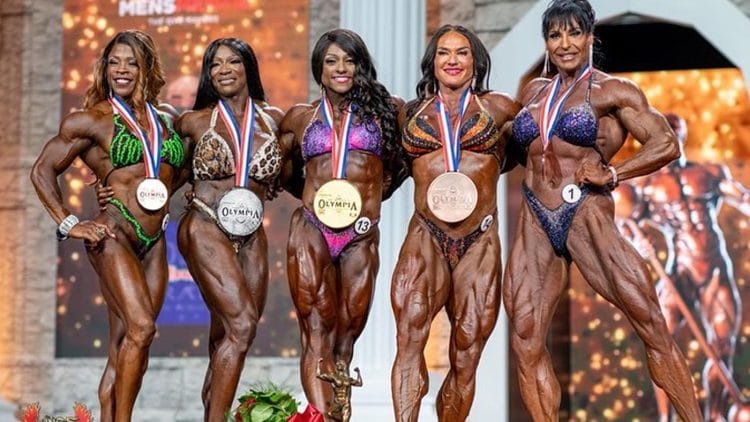 We’re just a week out from the 2021 Olympia taking place in Orlando, FL October 7-10, 2021, and things are getting exciting! This major event brings in the best competitors from around the world plus crowds of thousands and notable figures from many different industries. Last year, the Women’s Bodybuilding contest returned to the Olympia with Andrea Shaw winning the title.

While we’ve done our best to predict the 2021 Ms. Olympia top 6, it’s a little more challenging compared to some other divisions that stuck around for the major events. Not having taken place in five years, we have some catching up to do in the Women’s Open division.

Many of the Women’s bodybuilding competitors have only gotten the chance to shine on the biggest stage in the world, in 2020.

Sure Wings of Strength has supported the division but the Olympia no doubt puts a lot of pressure on competitors, especially those who may have competed at the Ms. Olympia before the five-year gap and then returned. Plus there’ve been new athletes on the scene.

Not to mention, the prize money will be at an all-time high this year.

Here are our 2021 Ms. Olympia predictions…

She’s the reigning, defending Ms. Olympia champion, and with such a jaw-dropping physique, it’s not hard to think she could repeat again in 2021.

A genetic standout, the 37-year-old Detroit, Michigan native trains with John Simmons, and together, they’ve done pretty well, to say the least. Shaw has won the last two WOS Rising Phoenix titles and plans to assert her dominance at the 2021 Olympia!

Some may feel her arms and shoulders are a little too big while her legs are a little undersized. Whether or not this is the case, few would disagree that she brought the best package overall. Plus, if she did need to make any adjustments she’d know following last year’s contest.

Taking third last year, Helle Trevino is a well-known name in the Women’s Bodybuilding division. That’s because she’s a veteran of the sport who’s competed at Ms. Olympia in 2003, 2011, and 2012. She’s also known for her 2017 and 2019 Rising Phoenix victories and took second in the event this year behind Shaw.

She looked great at the 2021 Rising Phoenix after making some notable improvements and her conditioning was crazy good. Trevino also has superior legs and while she could bring an overall package to get her the win, it’s going to be hard. Some of her areas that are known to need improving are her back, arms and delts, and waist.

At 46, the Denmark-born competitor is getting up in age so she likely feels a sense of urgency to win an Olympia title before she retires from the sport.

The division is stacked though.

A post shared by Margie The Marvelous One (@marvelousv)

But having actually competed in the last Ms. Olympia in 2014 (10th place finish) before it was relaunched in 2020, she has every reason to feel amazing about her placing.

Marvelous carries a lot of muscle mass even beating out Shaw in many areas. But many found she wasn’t as conditioned or tight in the waist compared to Shaw last year. If she can come in with better conditioning and flow to her physique, it will be very close!

Monique Jones has undoubtedly gained a lot of popularity as a top Women’s Bodybuilding contender. At 42 years old, Jones competed in the Ms. Olympia show in 2011, 2012, 2013, and, of course, 2020. She’s gradually improved her placing as well.

While we don’t believe she will win or place top three this year, we don’t think top 5 is unreasonable, especially since she’s 7th ranked in the world right now.

She has an outstanding upper body but with some overall improvements including her conditioning, she can continue to move up.

We predict the new up and comer Michaela Aycock in fifth. She’s a former Women’s Physique competitor who recently came over to Women’s Bodybuilding. Aycock has a very impressive physique having placed fourth at the 2021 Rising Phoenix Show.

Not to mention, she’s only 26 years old. While the lack of experience and overall size could be worrisome, we’re going to through this wildcard into the mix. After all, she did beat out both MayLa Ash (4th at 2021 Olympia) and Irene Anderson (5th at 2021 Olympia) at the recent Rising Phoenix event.

Anyhow, let’s see how she comes into the show next week.

MayLa Ash is a former Women’s Physique competitor who switched over to Women’s Bodybuilding last year.

It seems she may have found her home in this division.

Prior to making the transition to Women’s Bodybuilding, Ash competed at the Olympia three times in the Physique division and could not crack the top ten.

Well, she not only ended up winning her first Open show, the New York Pro, but she also took fourth at the 2020 Ms. Olympia.

Ash realized that she was outgrowing the Women’s Physique division and after packing on even more size heading into the O, the result was favorable, to say the least.

Although, her finish was not impressive at the 2021 Rising Phoenix, placing outside of the top ten in 11th place. She seemed very much off. This makes it hard to predict how she will place at the Olympia.

She no doubt needs more size in her back and legs and she knows that but she’s also been focused on adding more size overall. MayLa Ash has a very aesthetic physique though and can be a real threat to the crown in the coming years if she makes improvements and maintains good conditioning.

With just a week until the Olympia, it’s anyone’s guess as to how the show will go. While we can make our predictions based on last year and 2021 Olympia qualifiers, we have to see how the world’s best show up when it counts and that’s no easy feat.

Andrea Shaw is going to have a tough task in defending her title and while we think she can repeat, there are so many hungry competitors this year.

Be sure to stay tuned for updated ahead of the 2021 Olympia.

The Classic Physique contest at the 2022 Arnold Classic is scheduled for Friday, Mar. 4, 2022, and the competitors are turning up...