Elite powerlifter Amanda Lawrence shows once again why she the best of the best in her category after repeating her first place 2021 IPF World's performance. 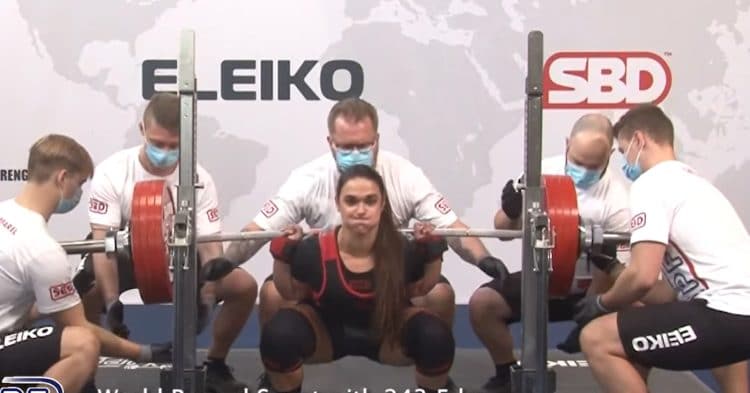 Here is a breakdown of the lifts from IPF World Championships:

Related: Women’s Powerlifting: What You Need to Know to Get Started

The event dates for IPF World’s are September 29 – October 3, 2021, and the competitions have been live-streamed via Olympics.com. Over 600 athletes gathered to compete at this massive show of strength.

The 24-year-old opened with a 232.5 kg squat, just 10 kilograms below the world record at that moment, and her next attempt was the world record lift of which she nailed. After breaking the world record, Amanda tried for a massive 250 kg however, it was ultimately too much for her.

Amanda started with a 122.5 kg bench press which was no problem for the phenom. Next was 130 kg which was 7kg below the world record and while there was a little struggle she managed to lockout for a successful lift.

The last attempt of 132.5 kg was also good and this was enough to give her a good number on the bench press but still conserve her energy for the big deadlift.

Amanda was already the world record holder in this lift with 252.5kg. Her deadlift opener was 240kg and it went up smooth as butter. At this point, she had already broken her own total world record by 3 kilograms.

But, of course, she wasn’t finished, going on to smash a 258kg deadlift and topping her previous world record of 252.5kg. For the cherry on top, Lawrence pulled 260.5 kg, stacking another 2.5kg on top of her total world record and that was a wrap!

We’ve covered Amanda Lawrence quite a bit on Fitness Volt and for good reason. She’s a dominant force in the 84 kg weight class and what she’s accomplished at just 24 years old is nothing short of astounding.

She started both training and competing in 2016, breaking the American Junior squat record in her first meet with a 179.9kg/396.8 lbs lift, and without having a clue.

Lawrence was also in good company at the IPF Worlds with popular names that we’ve covered many times, including Lya Bavoil, Jessica Buettner, and Russel Orhii, all of who smashed records of their own.

A Big Performance From The Legend

Yes, at 24 years old, Amanda Lawrence is most certainly a strength sports legend and she’s just getting started. Her performances at the IPF World Open Classic Powerlifting Championships have further cemented her name in the history books with three world records and we can’t wait to see what she brings to her next competition.

Be sure to stay tuned for more updates.

2021 Ms. Olympia Predictions – Who Will Take The Crown?

Despite being only 25 years old, Amanda Lawrence has placed herself amongst the biggest names in powerlifting. She did so...

The 2022 AMP Classic Open Nationals was an extravaganza of incredible performances from powerlifting athletes all across the States. It...

25-year old powerlifter Jessica Buettner is preparing for her first contest of the year. About a month out of the...