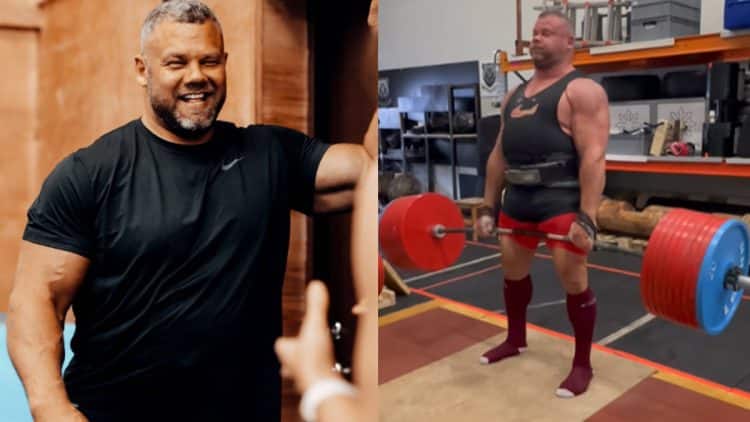 With the 2022 Giants Live World Deadlift Championships approaching rapidly, the participants are slowly reaching their peak shape. It will take place on Aug. 6, 2022, at the Motorpoint Arena in Cardiff, Wales, which is less than three weeks away. The Estonian representative, Rauno Heinla, has already completed his last heavy training session and unofficially broke the Master’s Deadlift World Record once again. This time, Rauno locked out an incredible 460 kilograms (1,014.1 pounds).

Rauno Heinla’s recent deadlift is 24 kilograms (52.9 pounds) over the current record, which is in the possession of Mikhail Shivlyakov. Mikhail set the record by deadlifting 436 kilograms (961.2 pounds) at the 2020 WUS Feats of Strength.

Rauno Heinla used a deadlift suit, lifting belt, and lifting straps for the 460-kilogram (1,014.1-pound) deadlift, which he will most likely use it for his official attempt as well. As Rauno is accustomed to the setup, it seems almost inevitable that we will see him officially claim the Master’s World Record in a few weeks. In training, he’s pulling more already, while competition adrenaline and some rest should make him stronger.

Judging by his caption, Rauno Heinla is obviously not completely satisfied with where he stands currently. His hopes are probably to deadlift 505 kilograms (1,113.3 pounds) in the upcoming competition, which would also secure him a prize of $55,000.

It wouldn’t be easy, as only a few have been able to accomplish the feat, including, Hafthor Bjornsson and Eddie Hall, both of whom lifted 500 kilograms (1,102.3 pounds). The goal for Rauno is to make history and become the third person to achieve this.

Rauno Heinla will be one of 12 men to attend the 2022 World Deadlift Championships. Every single one of them is undoubtedly a contender for the record. However, it seems that Ivan Makarov and Peiman Maheripourehir are the favorites currently. Makarov has a training PR of 490 kilograms (1,080.3 pounds), while Peiman deadlifted 492 kilograms (1,084.7 pounds) in training as well.

Hopefully Rauno Heinla will be successful in repeating this 460-kilogram (1,014.1-pound) deadlift at the 2022 World Deadlift Championships. If so, he will set a Masters World Record that probably won’t be broken in a very long time. Rauno also broke the Silver Dollar Deadlift record just less than two months ago, but it seems that he will now also break the standard deadlift Masters World Record.