Oleksii Novikov is proclaimed the winner of the 2022 Rogue Strongman Invitational after displaying a very consistent performance over the course of two days. 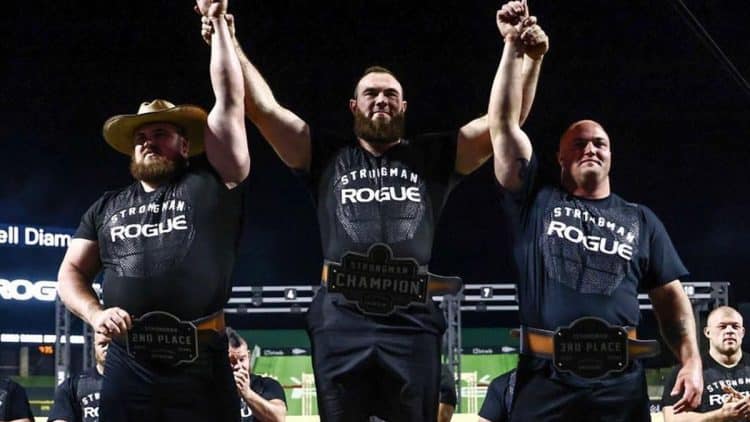 The 2022 Rogue Invitational Strongman competition took place on October 28-29, at the Dell Diamond in Austin Texas. Over the course of two days, ten of the world’s best strongmen competed in six events, with one winning a prestigious title and a large cash prize. That man was none other than Oleksii Novikov, as he won the 2022 Rogue Invitational with a comfortable lead.

One event win and a few solid performances were enough for Oleksii Novikov to win the second edition of the Rogue Invitational Strongman contest. Coming off a victory at the 2022 Shaw Classic, Trey Mitchell put up another impressive performance, but this time went home with a silver medal. Mitchell Hooper, a newcomer who also won two events, rounded out the top three.

The fourth event of the 2022 Rogue Invitational featured another epic custom-made piece of equipment. Basically, the athletes had to tug a sandbag filled cart uphill through what is best described as a rope arm-over-arm pull. The time cap was 90 seconds.

On the second day, Martins Licis entered the competition with a fresh outlook, aware of what he needs to do in order to achieve victory at the 2022 Rogue Invitational. Just like true champions do, Martins came in and won the fourth event by finishing the pull in 33.44 seconds.

Pavlo Nakonechnyy came in second with a time of 37.69 seconds, while Oleksii Novikov did not lose too many points, having placed third, finishing just more than half a second behind Pavlo.

The name of the fifth event perfectly described what the task in this penultimate challenge was. Athletes first had to carry a massive 1,000-pound (453.6-kilogram) Yoke, after which they transitioned to a 360-pound (163-kilogram) Log Lift. The task was to lift the log for three reps and complete the entire sequence in the fastest manner possible.

Mitchell Hooper once again proved that he is the fastest man in Strongman currently with a mind-blowing performance in this event. He finished the Yoke carry in just ten seconds, while many other athletes needed half a minute to do the same. His time of 32.89 seconds was untouchable and everyone else was fighting for second-place.

The second-place finisher was Maxime Boudreault, while Bobby Thompson claimed third with a time of 54.09 seconds.

Trey Mitchell won the event, but considering that Oleksii Novikov became the new 2022 Rogue Invitational champion despite finishing third, it did not make much difference. Mitchell Hooper also displayed a speedy performance once again and finished second in this event, but he still remained in third-place overall.

Event One — TOWER OF POWER

The Tower Of Power was basically an 18-inch elevated deadlift, which was loaded with a humongous 900 pounds (408.2 kilograms). The athletes had to perform as many reps as possible in a time span of 60 seconds. For this event, Rogue manufactured a custom tower platform that enhanced the show’s entertainment. Lifting straps were allowed, while deadlift suits were not.

Pavlo Nakonechnyy was the only man from the entire roster that did not test the Deadlift Tower before the start of the competition, but he still managed to blow his rivals away. Pavlo could have won with 11 reps, but chose to do an excessive rep and took 10 points with 12 reps.

Although Trey Mitchell was hoping for the win, he settled for second place as the only other man to hit double digits with ten repetitions. Following him, the two favorites, Martins Licis and Oleksii Novikov shared the third-place points with 9 reps each.

The Cyr Dumbbell Ladder is becoming a very regular event on the Strongman scene, probably because it brings so much diversity and perfectly tests the upper body strength and technique of athletes. In this case, the athletes had to overhead press four implements weighing 253 pounds, 274 pounds, 280 pounds, and 285 pounds. However, if they managed to lift all implements, then they kept lifting the fourth dumbbell for as many reps as possible before the time limit ran out.

The Cyr Dumbbell Press event was once again won by Oleksii Novikov, who had completed two reps with 285 pounds after locking out the three lighter dumbbells. Surprisingly, Trey Mitchell almost beat Oleksii, but he only completed one rep with a 285-pound dumbbell. However, his performance was enough to secure him another second-place finish. Third place went to Martins Licis, who completed the 280-pound dumbbell with a faster time than Rob Kearney.

The final event of the 2022 Rogue Invitational Day One was the Rogue Husafell Sandbag Carry. Inspired by the famous shield-like Husafell Stone, Rogue manufactured an almost identical sandbag replica. It weighed 400 pounds (181 kilograms). It had to be picked up and carried as far as possible.

In the final event of day two of the 2022 Rogue Invitational, Mitchell Hooper turned in a brilliant performance. He hoisted the bag to his grasp and carried it for 225 feet without dropping it. As a first-year pro strongman and first-time participant at the Rogue Invitational, Hooper has now achieved some feats that many could not.

The first thing Oleksii Novikov did was wait for everyone else to start before determining how many meters he would have to run to win the race. This tactical masterpiece allowed him to finish just behind Mitchell Hooper with a distance of 213-foot 9-inches and end day one of the 2022 Rogue Invitational on the top spot overall.

The Strongman competition is now over, but the Rogue Invitational 2022 proved why it is one of the most prestigious events of the year. It will be very exciting to see what the third edition of the show will bring in 2023.