‘The Boogieman’ showed off the latest improvements to his physique for his first-ever Mr. Olympia contest. 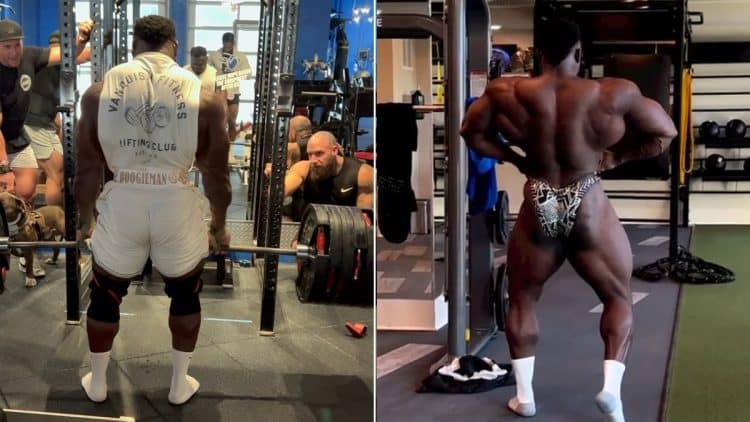 Bodybuilder Blessing Awodibu is determined to shock the world at his first-ever Mr. Olympia appearance. In a recent post made on Instagram, Blessing shared an impressive physique update seven weeks from 2022 Mr. Olympia.


After a rough start to his bodybuilding career in 2021, Blessing went back to the drawing board to work on his build. In 2022, he kicked the season off with a win at the 2022 Indy Pro. He made his way to the 2022 New York Pro just a week later and took home the crown there as well to earn his qualification to the 2022 Olympia.

Many have criticized his Blessing’s lower body development. Given the feedback, he understood the assignment and grew his legs in the off-season. He showcased a number of workouts during the season too. Ultimately, his goal is to bring an improved package to Olympia stage since winning back-to-back contests earlier this year.

Michal Krizo has also looked very impressive as of late. He earned his IFBB Pro Card two weeks ago after winning the Amateur Olympia Italy contest. After winning the contest in a dominant fashion, Blessing welcomed Krizo to the‘ a** whopping league.’

In a recent post made on Instagram, Blessing shared a physique update just seven weeks out from the biggest show in bodybuilding, the upcoming 2022 Olympia contest, scheduled for Dec. 15-18 at Planet Hollywood Resort & Casino in Las Vegas, Nevada.

Fellow IFBB Pro Sami Ghanem appears to mentor Blessing through a posing routine. Blessing’s back, which is widely regarded as one of his best weapons, was on full display.

“#7weeks out baby. We working #theboogiemanera. Some rounds with @supersaiyansami post fasted cardio.”

This year’s season is turning out to be one of the most exciting and competitive. A plethora of talent looks to shake up the standings from last year. Reigning two-time Mr. Olympia Mamdouh ‘Big Ramy’ Elssbiay is the favorite to defend his title whereas Hunter Labrada, Nick Walker, and other contenders are eager to dethrone the dominant champion.

Renowned bodybuilding coach George Farah gave his take on the show’s lineup last week. Farah backed rookie Andrew Jacked to beat Blessing at the 2022 Olympia, arguing he had the more complete package. He added that, ‘people don’t talk about Blessing anymore because Andrew came in the picture.’

According to Blessing Awodibu, he agrees that this year’s Olympia lineup is going to be crazy, especially since he will be standing against fellow Nigerian standout Andrew Jacked. In fact, Blessing went so far as to suggest that Andrew’s potential in the IFBB is ‘limitless.’

Awodibu hasn’t been shy about calling out opponents either. He went back and forth with top Olympia contender Iain Valliere recently. The two argued about whether bodybuilding should favor size or aesthetics more. Eventually, the two fired shots at each other, with Awodibu telling Iain that he’s going to ‘whoop his ass’ when he squares off with him at 2022 Olympia.

Blessing Awodibu is leaving no stone unturned in bringing an improved package in his Olympia debut. He recently joined forces with bodybuilding legend and seven-time Sandow trophy winner Phil Heath for an intense arm workout. Based on his latest update, Blessing is planning to shake up the Men’s Open division later this year.