Six winners were crowned champion this weekend at the 2022 Prague Pro show. 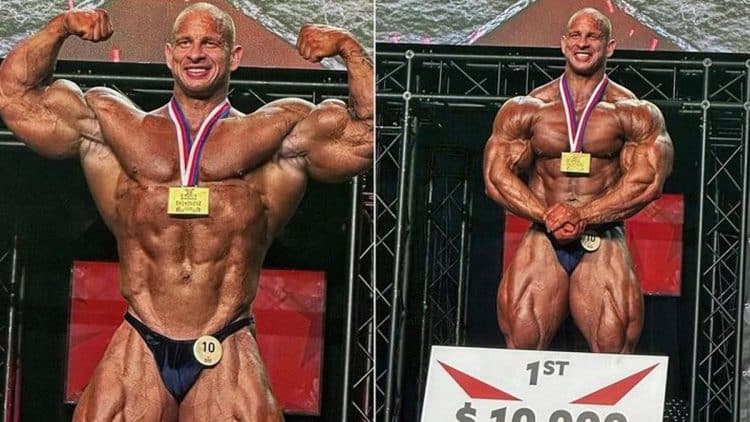 The 2022 EVLS Prague Pro took place the weekend of October 29, 2022, in Prague, Czech Republic. Bodybuilding competitors from the Men’s Open, 212, Classic Physique, Men’s Physique, Bikini, and Wellness categories competed on stage for the chance at earning a 2022 Mr. Olympia qualification.
This year’s Olympia contest takes place from Dec. 15 – 18, in Las Vegas, Nevada at the Planet Hollywood Resort & Casino. At the 2021 Prague Pro last year (2021), Samson Dauda won the Men’s Open title. He is not included in the lineup this year, so a new champion will be crowned.
Fans of the sport were highly anticipating Michal Krizo’s IFBB Pro debut, who has been sizing up other Men’s Open competitors since switching to the NPC. He recently earned his Pro card at the 2022 Amateur Olympia Italy contest in dominant fashion. Check out the five winners of this contest below:

Heading into the contest all eyes were on Slovakia’s Michal Krizo. He quickly rose to prominence after winning the 2022 Amateur Olympia Italy a few weeks ago. During prejudging, he dwarfed many of the other competitors, however, he was challenged by a few, including Jan Turek.

Judges pushed those in the first call out through several poses. After a close show, Michal ‘Krizo’ Krizanek won the Bodybuilding title and is 2022 Mr. Olympia bound. This marks Krizo’s first Pro show victory in the IFBB Pro League. He joins rarified air after managing to earn his Pro card and win a Pro show all within the same month.

Classic Physique competitors went to war in the Czech Republic. Kelvin Hinde arguably brought his best package to date and showcased an incredible upper body throughout prejudging. While he didn’t fade in the finals, the overall conditioning of Patrik Herczik proved to be too much to handle. In the end, Patrik Herczik won the title and punched his ticket to 2022 Olympia.

Given how little time there is until 2022 Mr. Olympia, pressure was on for everyone — including the 212 Bodybuilding division. Dawid Cnota impressed early. However, for most of prejudging and finals, fans and judges were taken aback by the stellar physique Peter Molnar brought. It was an exciting contest, but Peter Molnar pulled away and earned his shot at the 2022 Olympia competition.

Furkan Er grabbed everyone’s attention at the show with impressive muscularity and balance. Although he put on a good battle, Abisai Pietersz walked away with the victory and earned his invite to compete at 2022 Olympia.

Bikini competitors threw down this weekend. Prejudging saw Zsofia Reka Molnar emerge as a legitimate threat to the title. It was a close event, though Valeria Kord pulled ahead during the finals and won the contest.

The Wellness division has seen an explosion in popularity as of late. It seems every time this division is showcased at an event, they end up stealing the show. This weekend was no different. Danai Theodoropoulou was narrowly defeated by Mari Carvalho, who won the contest and is now 2022 Olympia bound.

Our staff at Fitness Volt congratulates the winners on their major victories. We look forward to seeing you all compete on the Mr. Olympia stage!