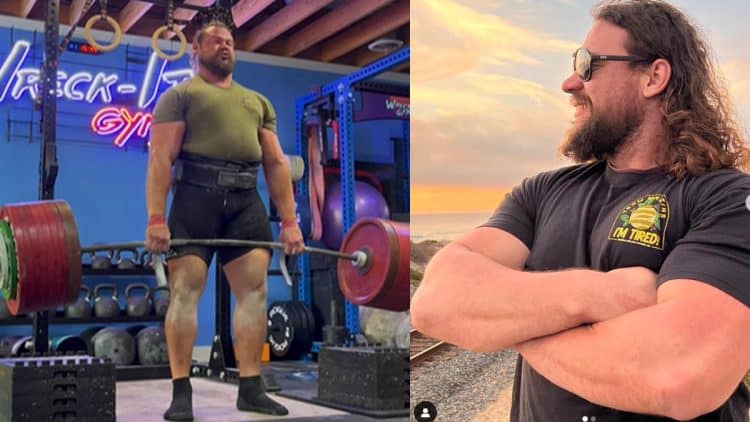 The 2022 Rogue Invitational is just around the corner, as the Strongman action will unpack over the weekend of October 28-30, at the Dell Diamond Stadium in Austin, TX. In spite of the fact that the ten-man lineup is filled with incredible athletes, everyone will be striving to dethrone one man in particular. That is last year’s champion, Martins Licis, who will be going for his second consecutive victory. Martins has been practicing for this competition for the past four months. He trained specifically for the events of the 2022 Rogue Invitational during this time. Recently, Martins cranked out a 1,003-pound (455-kilogram) Block Pull (Elevated Deadlift) for four reps.

A similar exercise will be featured at the 2022 Rogue Invitational, but it will be called an Elevated Deadlift. The athletes will have a set weight determined with which they will attempt to perform as many reps as possible. The platform for the deadlift is likely to be 20 inches high. Martins Licis’ recent Block Pull set clearly prepares him for this.

Martins Licis used a lifting belt and lifting straps to aid him in achieving this feat of strength. Furthermore, his stance was a bit wider than usual, which he then joked about and stated that he used a sumo stance.

“1000lb (455kg) sumo *cough* I mean block-pull deadlifts for 4 reps and plenty more in reserve 😎 Good place to be! (Basically same concept as sumo though).”

Martins Licis does not compete often, but that is what makes his every performance special. He focuses 100% on a single competition at a time and is always one of the favorites for the first-place finish. However, the 2022 Rogue Invitational is a special competition for him, since the prize purse is set to be massive.

Martins Licis has been competing in Strongman since 2015 and has taken part in 23 International and National competitions. He also managed to win eight competitions, most notably:

Apart from an impressive overall competition resume, Martins Licis has also set some of the most impressive Strongman World Records. That includes a Thor’s Hammer World Record, which he set with a 300-pound lift. He achieved this record at the 2021 Rogue Invitational.

Although Martin’s Licis is still the favorite the win the 2022 Rogue Invitational, the change in lineup from last year makes it a bit harder for him to feel safe. There’s no doubt the Elevated Deadlift event will benefit him, which might influence the final outcome. Only ten days are left, so we won’t have to wait long to see how things unfold.