Ten winners were crowned at the 2022 Tampa Pro bodybuilding show 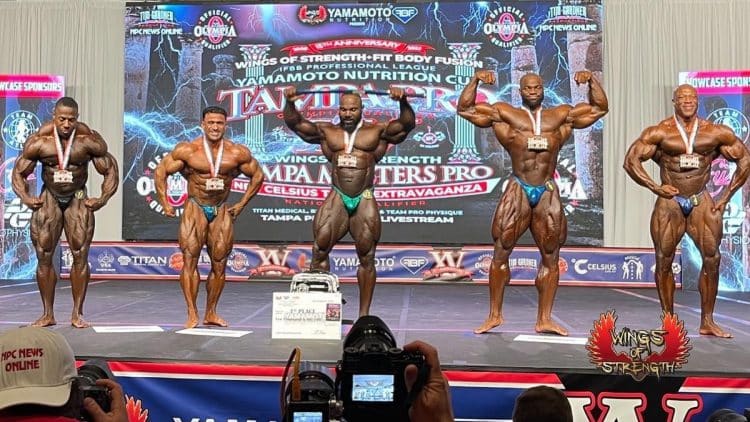 The 2022 Tampa Pro took place on August 4-6, 2022, in Tampa, Florida. Tim Gardner Productions introduced the Tampa Pro in 2008, and it’s been going on ever since. Ten bodybuilding divisions were featured at this show. Competitors from 212 Bodybuilding, Classic Physique, Men’s Open, Men’s Physique, Bikini, Women’s Bodybuilding, Figure, Fitness, Women’s Physique, and Wellness took to the stage looking to earn the invitation to compete at Mr. Olympia in December.

The 2022 season of bodybuilding is underway with athletes gathering from around the world, presenting their physiques, in hopes to secure a coveted invitation to the Olympia contest this winter. 2022 Olympia will take place from Dec. 15th – 18th in Las Vegas, Nevada.

The qualification period for the biggest bodybuilding show of the year began September 13, 2021, and runs until November 20, 2022.

Find the list of winners and results from the Tampa Pro below:

Kamal Elgargni attempted 2021 Olympia in the 212 class but found himself in third place. At the end of July this year, Kamal announced that he would be taking his talents to the Men’s Open division, starting with the 2022 Tampa Pro and then the Texas Pro and Ronnie Coleman Classic. Elgargni brought an incredibly conditioned physique to Florida this weekend and proved he could compete against elite-level bodybuilders in the Open.

Bodybuilder Akim Williams’ sheer mass and stage presence makes him a difficult opponent to contend with. Williams kicked off his season last year by capturing the 2021 Puerto Rico Pro title. He followed that up with a fifth place finish at the 2021 Arnold Classic before placing ninth at Olympia, respectively.
Akim Williams brought one of his best packages to date with an exceptional upper body this weekend. After a close contest against Elgargni, Akim Williams won the Open Bodybuilding Tampa Pro title and secured his invitation to Mr. Olympia this December.

Keone Pearson registered an impressive season last year. He won the 2021 Chicago Pro and earned 14th place in the 212 class at Mr. Olympia in the same year. Six weeks ago, Keone shared a physique update with feathered quads and brought his best package to date in Florida this week.

Another standout heading into the event was Kerrith Bajjo. He competed at three IFBB Pro League shows last year. The 212 competitor picked up bronze at the 2021 Chicago Pro, behind runner-up Ahmed Elsadany and champion, Keone Pearson. Before ending his season last year, Bajjo won the Tampa Pro and then placed eighth at 2021 Olympia. After a close contest, Keone Pearson won the 212 Bodybuilding title at the Tampa Pro.

NPC athlete Adely Annorat attracted a lot of attention in Tampa. He took part in three NPC shows last year starting with the 2021 NPC Border Clash title. Before calling it a season, Annorat placed 10th at the Universe & NPC National Fitness Championships and fifth at the NPC National Championships, respectively.

Bodybuilder Courage Opara returned to stage this weekend. Last year, Courage competed at two of the biggest shows in the sport. He brought an impressive package at the 2021 Arnold Classic, where he secured fourth place. After taking his physique to Olympia that same year, Courage was met with adversity, and ultimately placed 15th. After a close battle against Annorat, Courage Opara won the 2022 Classic Physique Tampa Pro title.

Anticipation for the biggest show of the year continues to build. Fitness Volt would like to congratulate the winners on their major victories at the 2022 Tampa Pro.

How To Do Low Jacks – Muscles Worked, Benefits, and Alternatives