The details of the events for the 2022 World's Strongest Man have been revealed and it features some old-school elements. 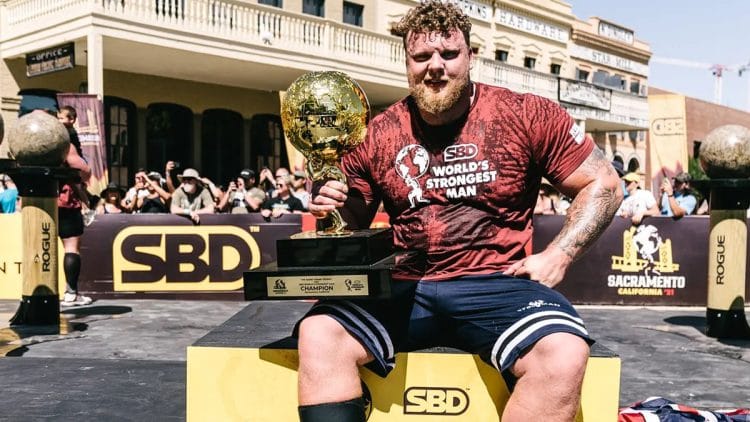 The 2022 World’s Strongest Man is approaching fast as the contest will take place May 24-29, in Sacramento, California. The 30 of the World’s greatest athletes will go head-to-head to discover who is the Strongest amongst them. And now the events for the 2022 WSM have been revealed. One thing is certain, the Strongman fans around the world will enjoy it. It will be a five-day competition, and the athletes will first have to qualify for the finals.

Although the group’s members at the 2022 World’s Strongest Man have not yet been revealed, we know the format of the competition. During the three days of qualifying, 30 athletes will be separated into 6 groups of five competitors. From there, the contestants will battle to claim as high of a position as possible. The first-place finisher of each group will go straight into the finals. While the 2nd and 3rd place finisher will have to go through a traditional stone-off. The winner of that will also go to the finals.

We will update the article once the official groups are announced.

The 2022 World’s Strongest Man contest will feature multiple old-school events as well as some brand new ones.

The Car Walk is one of the vintage events which were not seen for a very long time at a WSM contest. For this event, athletes will strap a vintage VW bug to their shoulders before racing down a 25-meter course.

The Power Stairs are another classic WSM event where the world’s strongest will lift and carry leaden weights up a flight of steps. We got to see this event implemented in the 2022 Europe’s Strongest Man, and it is evident that higher and heavier athletes have the advantage.

The Flinstone Barbell event is also making a comeback, and strongmen will lift a prehistoric-looking weight overhead which may exceed 500 pounds. This event is basically a behind-the-neck press, which we got to see implemented in a few of Strongman’s training sessions. The weight will be progressively increased, and the goal is to lift as heavy as possible.

In the Bus Pull event, the athletes will pull a brand new Sacramento Regional Transit Bus weighing approximately 40,000 pounds in a race against time. The surface and tire grip will most definitely play a big factor in this event.

The Deadlift Ladder will also be featured in the 2022 World’s Strongest Man, after it was a part of the 2022 Europe’s Strongest Man. The weight will be ranging between 650 lbs and 750 lbs.

The Wrecking Ball Hold is making its first-ever appearance at a WSM contest. The competitors will have to lift a massively heavy wrecking ball and hold it for as long as possible.

For the Loading Race, the athletes will be required to load large implements ranging from 250 to 500 lbs.

The KNAACK® Giant’s Medley is similar to the Loading Race, except it consists of a box carry and a super yoke.

The competition will traditionally end with Atlas Stones. This year the stones will weigh between 300 and 470 pounds.

Rauno Heinla and Mateusz Kieliszkowski have already withdrawn due to injuries, but their space in the 2022 World’s Strongest Man has been filled already. This is what the roster looks like currently.

The events for the 2022 World’s Strongest Man look very interesting and suitable for a variety of competitors. Looking at the event list and schedule it definitely seems like this year’s edition will be very unpredictable.