Oleksii Novikov takes up arms to help defend Ukraine against the Russian invasion. 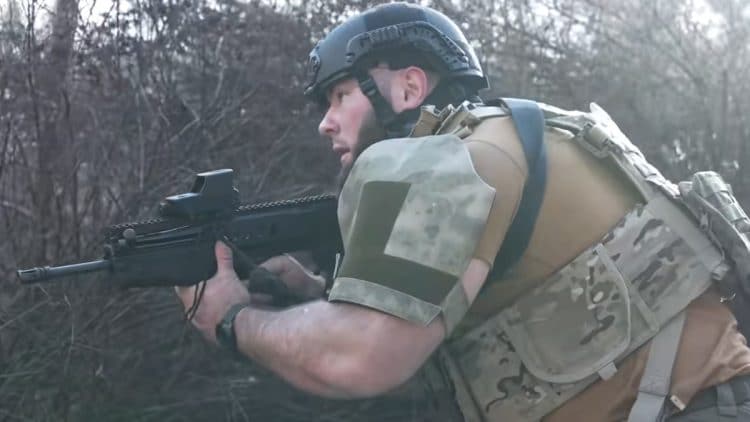 2020 World’s Strongest Man Oleksii Novikov is not giving up in his attempt to help and defend Ukraine and its people against Russian military forces. Early on in the war, he requested donations for food, medical equipment, and military equipment. That was going well until all the banks closed their accounts in Ukraine. He also represented his country in two coveted Strongman contests, and now Oleksii shared his Ukrainian military training footage on his YouTube channel.

Oleksii Novikov came second in the 2022 Arnold Strongman Classic and ended up bringing home a larger prize purse than planned. On April 2nd, 2022, Oleksii Novikov also claimed the title of Europe’s Strongest Man, and explained that he is the representative of the Ukrainian people as a whole. Oleksii held a heartfelt speech, which was also a part of his recent video.

“What can I say? Unfortunately, I can’t train like a Strongman. In the last months, I trained like a soldier.”

Oleksii Novikov also sent a message to the people of Ukraine in their native language.

“I dedicate this win to Ukraine. We’ll win, we’re the strongest, remember it. And we’ll be the most prosperous country in the world. We’ll live a very good life, I promise. I travel a lot and know that Ukraine is truly the best country and I don’t want to live in any country apart from Ukraine.”

Oleksii Novikov’s video also contained some military training footage. Just a few days after winning one of the most prestigious titles in the world, Oleksii is uniting with his fellow countrymen in an ultimate act of defending their country. In the training video, Oleksii can be seen fully decked out with gear. The equipment did not affect Oleksii in any way, as he is used to training under a heavy load for Strongman. Oleksii was seen running and easily maneuvering while also reloading and shooting the targets. The targets were represented with pictures of Vladimir Putin and Alexander Lukashenko, the leaders of Russia and Belarus.

Oleksii Novikov wrapped up his video with a moment of silence for all Ukrainians, who were killed during the last couple of weeks.

The next move for Oleksii Novikov is supposed to be the 2022 World’s Strongest Man, which will take place from May 24-29, in Sacramento, California. The events for this competition have not yet been revealed, but it would be nice if Oleksii could get some training going because he has proved that he has the physical abilities to be the best in the world. Oleksii has already won the WSM back in 2020, but this year’s edition will mean a lot for both him and Ukraine.