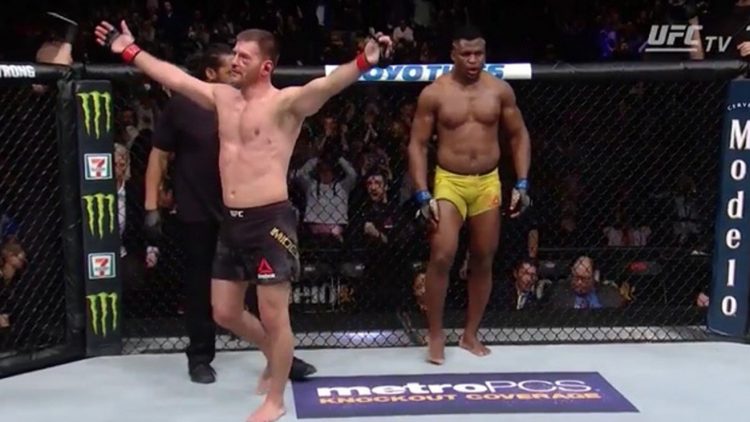 Stipe Miocic retained his heavyweight title tonight at UFC 220 after weathering an early storm from Francis Ngannou and then making him pay in the rounds that followed with superior wrestling and conditioning.

Since making his UFC debut at the end of 2015, Francis Ngannou (11-1 before this fight) has taken the promotion by storm with six consecutive victories.

The fight started with fire, with both fighters landing powerful shots. Halfway through the first round Francis hurt Miocic hard and looked to pounce on his prey. It looked like the fight could be over within the first couple of minutes, but Stipe Miocic shrugged off the defeat and managed to take down Francis at the end of the round.

Despite Francis looking completely gassed out, he still threatened every time he threw a punch and had an opportunity to stop Stipe in the fifth round after landing a significant strike. He also attempted a flying knee late in the final round but was unable to land it properly.

Stipe defended his title successfully and proved that he is the baddest man on the planet.

The champ is in great form tonight! #UFC220 pic.twitter.com/CPkya7PWtI

The main event of the UFC on ESPN 1 brought a very interesting Heavyweight fight. The all-time best Cameroonian mixed...