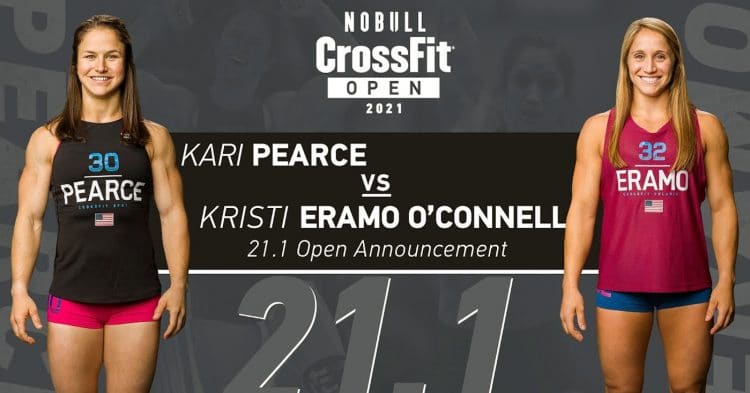 Today marks the day CrossFitters and fans across the globe have been waiting for, the launch of the CrossFit Open. While athletes over the world have been competing online at home or in their local CrossFit affiliate, elite CrossFitters have been gearing up for the workouts. Tonight, last year’s third-place finisher Kari Pearce goes head-to-head with Kristi Eramo O’Connell.

Last year’s open workout announcement was continued for five straight weeks, but this year it only consists of three workouts which will last for three weeks.

The live CrossFit Open announcement was led by Sean Woodland and Derek Forrest.

Here is the first workout 21.1 named Engine vs. Skill looks like:

A wall walk is new to the CrossFit Games. To perform this movement, the athlete starts with feet prone against the wall. They walk up the wall with their hands towards the base of the wall. When the athlete has reached the handstand position, they reverse it back to start. That is a total of one rep.

A double-under is a jump-rope movement, where the rope passes under the feet twice with each jump. The rope spins forward with each rep. Successful jumps are counted, attempts are not.

A bear crawl can be done two ways. In one position, hands and feet are on the floor with hips higher than shoulders. Arms and knees are bent, hips and shoulders are square to each other, and the athlete crawls forward. They must cross the 5-foot marker with both hands and feet before starting the next rep.

Another way of doing that is with an incline march with hands on an elevated surface and knees to the chest. The athlete puts their hands on the surface, and alternates bringing knees towards the chest. When this is done five times, one rep is accomplished.

For lateral jumps, a line that is a minimum of 2 inches wide is taped to the floor. The athlete takes a two-foot takeoff and lands, jumping over the line and back for one rep.

Watch the video below (live)

Kristi Eramo O’Connell is 31-years-old going into the 2021 CrossFit Open. She comes to this year’s CrossFit Open with triathalon experience. Kari Pearce is also 31, and in addition to almost two decades of gymnastics, she has a podium finish to her CrossFit resume, having won the Bronze in the 2020 Reebook CrossFit Games.

For Kari Pearce, the Atalanta event in the CrossFit Finals gave her the upper hand for the third place on the podium. That event included handstand push-ups, pistol squats, and pull-ups.

The pair haven’t been head-to-head since 2017, during the 17.2 workout. It was Kari that prevailed there.

These are the unofficial scores. The crowd-pleaser was Kari Pearce for the win, when she worked out an almost unbroken set of 210 double-unders.

The 2021 CrossFit Open kicked off on March 11 and continue until March 29.