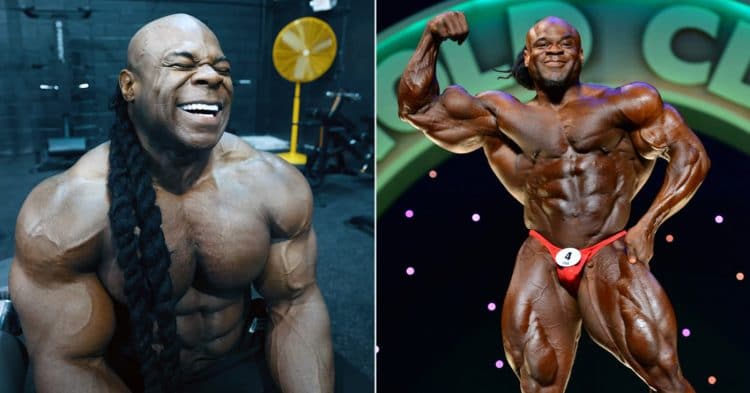 Three-time Arnold Classic champion (2009, 2010, 2016) and three-time Mr. Olympia runner-up (2012-2014) Kai Greene hasn’t competed in five years but he still trains and has certainly been busy with other endeavors such as art, acting, business, his new podcast, and more. He’s even tried CrossFit recently, completing his first-ever CrossFit workout in Times Square New York.

Regarded as one of the greatest bodybuilders to have never won the prestigious Olympia title, Kai Greene is known for having quite the personality that made him a star in the sport. So it’s no surprise he joined the Buttery Bros for a WOD, which stands for workout of the day.

For those unaware, the Buttery Bros are a duo consisting of former CrossFit employees Heber Cannon and Marston Sawyers who have produced and directed several notable CrossFit documentaries.

In the first few minutes of the video, it’s clear that these guys are like three peas in a pod with their extremely high energy. That’s a good thing because if you’re looking for entertainment then look no further.

The day before the WOD attempt, they met up at the gym to do a training session, and Sawyers called Kai a very large man and dozen eggs type of guy… well, he wasn’t lying.

So they fooled around some in the gym, drank some Reign (sponsored the video) energy drinks and Kai put the Bros through a brutal leg and butt workout consisting of the abductor machine, Jefferson squats, hamstring curls, barbell Romanian deadlifts, front squats, and more.

Heber gifted Kai with some cool shades and their heart rate tracker before things got a little weird with the guys trying to imitate some Michael Jackson moves and then talking about manscaping… (maybe a good time to use the fast forward feature).

All jokes aside, it was time for the WOD.

They arrived in freezing cold Times Square and the plan was to make Kai do the Hero WOD “Randy” or 75 power snatches for time.

Cannon demonstrated the movement that involves using a wide/snatch grip and deadlifting the bar from the ground to the hips before lifting it overhead.

According to the rules for Randy, men have to use 75 lbs whereas women use 55 lbs for the workout. Kai decided to go with 135 lbs instead but that’s noting for a beast, or should we say, Predator like him.

Because Kai hadn’t done these before he had to prepare himself and chug down an energy drink but he eventually got going. He completed  33 reps, stopped, continued until 60 reps, stopped, and hit the remaining 15 reps to complete the “Randy” WOD.

Surprisingly, he didn’t look exhausted. Although he did mention having to catch his breath afterward which is expected. But the cold weather probably helped too.

He finished the workout in a time of six minutes and 40 seconds (6:40). Sure, he didn’t break any records or perform to the level of a seasoned CrossFitter but no one was expecting him to.

It’s all about trying new things and challenging yourself but it certainly helps with publicity… just ask Strongman legend Eddie Hall who never backs down from a challenge.

After the WOD Kai Greene and the Buttery Bros visited Morgan Stanley hospital where they gave out Reign energy drinks to hospital staff/first responders who are working through the pandemic. The staff were very grateful for the kind gesture and also talked a little about their experiences during these tough times.

To wrap up the video, the guys stopped b Kai’s impressive art studio where the magic happens. The Buttery Bros included a segment after they arrived back in Utah and mentioned that they have the 2021 CrossFit Open 21.1 on March 11, 2021 (same day as the posting of this article) and that should be exciting.

Watch the entire video below…

Read more: 2021 CrossFit Open Workout Announcements And How You Can Watch