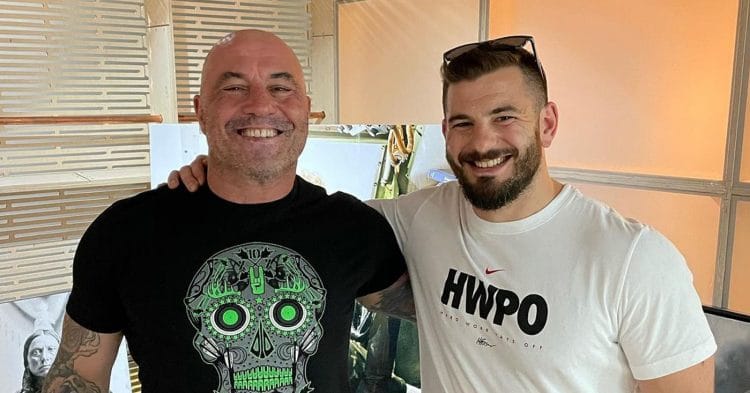 Mat Fraser holds the record for most CrossFit Games titles (5) and at this point, there’s nothing more to prove, especially since he was so dominant in his last performance before announcing his retirement. This may mean the end of one road for him but his journey down many others has just begun. Fraser was recently on Joe Rogan’s podcast, The Joe Rogan Experience (JRE) that is exclusive to Spotify and while it aired on March 11, clips of it will also be shared on YouTube.

Fraser is part of a podcast with CrossFit athlete Josh Bridges and film director/former CrossFit podcast host Sevan Matossian, called Mat Josh Sevan on YouTube. They have 11 episodes so far and in their most recent upload, Fraser being invited to Rogan’s podcast was brought up but he couldn’t say much.

We did however provide some details about a part of their conversation during the podcast.

He interviews all different types of people from various walks of life including athletes, actors, comedians, entrepreneurs, speakers, and many more.

He also recently relocated from LA to Texas where he now does his shows.

During the episode, they discussed Fraser’s journey and CrossFit-related topics. But the subject of performance-enhancing drugs (PEDs) came up when Fraser talked about his competitive weightlifting days several years ago.

He explained that the US was one of the few countries whose athletes competed clean but it was hard to compete because athletes from other countries would use PEDs. Fraser said that he remembers an 18-year-old that snatching more than he could clean and jerk.

As a result, his coach was under a lot of pressure to produce winning athletes from the US and that meant doing whatever was necessary.

They discussed how openly athletes would use PEDs years ago.

Fraser added that his parents were professional figure skaters and they’d see syringes sitting on the benches from athletes in other countries because they didn’t test them for drugs.

Then you have people who claim steroids don’t do anything and it’s the hard work and training methods that produce the desired results. Well, both called it like it is… bs.

Fraser talked about a similar experience he had competing in CrossFit.

“The one guy that he was on the podium at the Games and then got popped, I competed against him six or eight months prior. The one stat he was snatching like 260-265 and then shows up to the Games and snatches like 290 and he almost hit 300, and he’s like no no the drugs had nothing to do with that.”

What made this even crazier was that the guy was experienced with years in the sports so it’s not like he could benefit from newbie gains in such a short span… it was obviously the drugs.

Rogan asked how often they get tested in CrossFit and Fraser explained that it’s pretty often and random too. This was also the case when he was a weightlifter and they’d actually follow athletes around to make sure they could test them.

In fact, the policies were so strict that they’d sit in class or in the room with these athletes until they could test them. They’d also have to watch athletes urinate but he says you get used to it after a while.

Fraser talked about his first time getting tested for CrossFit. He knew other athletes were doping and wanted there to be testing.

“I was honestly excited because I was like oh sweet they do regulate this.”

But what he didn’t like was that they gave him a day’s notice before showing up to test him as this could allow athletes to flush their systems.

He won’t have to worry about being tested anymore though, but it was a minor inconvenience for what turned out to be an amazing career and legacy.

You can listen to the full podcast episode on Spotify.

If you want to see more content with Mat Fraser, he does have a relatively new YouTube channel called Fra5er, where he and his fiance  Sammy Moniz “take on fitness, food, family, home renovations, and a whole lot of fun!”

Also, be sure to check back with us for the latest news stories and updates on the 2021 CrossFit Open that is currently underway.