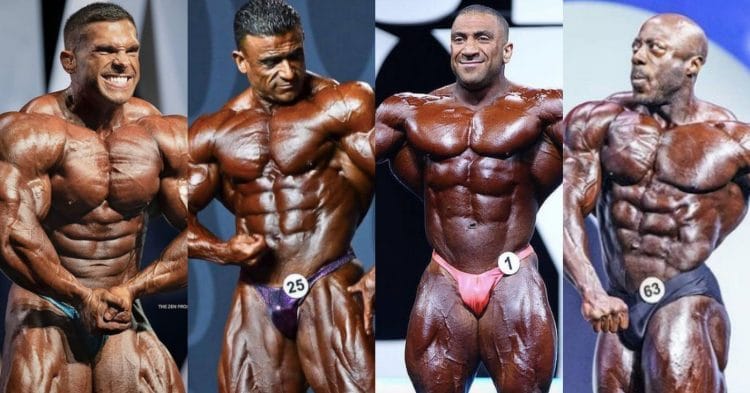 A lot of focus is being placed on various divisions heading into the 2020 Mr. Olympia. While the 212 Division may not be getting as much shine this year, its top athletes are here to show you that they too have a lot to offer to this year’s show.

The 212 Division is essentially the shrunken down version of the Open, with athletes required to be 5’5 or shorter, with a maximum weight limit being the obvious 212lb. It designed to favor the athletes who can get massive and jacked, but still be undersized for the mass monsters that appear in the Open. Make no mistake though, these men are still incredible physical specimens and have produced some incredible physiques over the years.

With the 2020 Olympia just two weeks away, the best 212 bodybuilders in the world have been working hard to prepare for the contest. Several of them have been sharing updates on their prep for the show, and each look as impressive as the rest. Today we will take a look at some of the best and brightest from the division, whom we may see victorious by the contest’s end.

When Kamal Elgargni won the 212 Olympia last year, he did so in the absence of Flex Lewis, who had been reigning as champ for seven consecutive years. That being said, Kamal somewhat shocked the masses with his win, and proved to the bodybuilding world that he is one of the best in the world. He is looking to continue his run this year, and has been putting in the work to make that happen.

What makes Kamal’s appearance at the 2020 Olympia so interesting, is the fact that he has been working alongside the aforementioned Flex Lewis to prepare for the contest. The pair have been grinding hard in the gym, and things seem to be coming together for Kamal. The work he has been putting in is paying off, and he appears to be in tremendous shape as the contest draws closer.

When longtime champ Flex Lewis decided to give up his reign over the 212 Division, fans thought that Derek Lunsford would be the next to take that throne. He had come second to Flex in 2018 and seemed primed to take over as champ, but he would again be the runner-up in 2019, this time to Kamal. So he has been intensely focused on trying to beat his bridesmaid status, and looks to dethrone Elgargni in 2020.

Lunsford intends on coming in sharp, and all of his training is pointing to this outcome. Whether or not he can be victorious is yet to be seen, but he appears to be intent on not coming in second place again. As you can see in the video above, his back is always incredible, but recently he has been putting focus on his legs too, hoping to bring those up to par.

Former Classic Physique competition George Peterson has opted to make the move to 212 following three consecutive third place finishes at the Olympia. This seems to have been the right move too, as the extra mass has been good on him. The physique updates that he has been posting to his Instagram just two weeks out from the Olympia have people wondering if he can be a future champ.

As shredded and vascular as he looks in this pose, Peterson’s best work easily comes from his back. He has one of the most defined backs in the sport, and he as only been making it better. When he is on stage, showing off this type of look, he will be hard to match.

Since turning pro in 2016, Ahmad Ashkanani has never been far from the top of the 212 Division. He is a two-time runner up of the Olympia, and has won the Arnold Classic, Tampa Pro, and New York Pro. Although he has had some less than stellar performance over the last couple of years, he looks to rectify that at the 2020 Olympia.

Ashkanani has always been a fantastic athlete with an impeccable physique. This year however, he seems to be taking his conditioning to the next level. How much of a difference it makes in the end, we will see, but for now he looks to be at the top of his game.

What do you think of these updates from the top 212 Division bodybuilders? Who do you see walking away from the 2020 Olympia victorious?