Francis Ngannou Calls Out Brock Lesnar, ‘Give Me That F__king Fight’

UFC heavyweight fighter Francis Ngannou decides to take some time off from MMA after his loss to Stipe Miocic UFC 220.

Ngannou lost a one-sided battle with Miocic in the main event of UFC 220. That fight went the distance, but Miocic swept the scorecards with all three judges scoring the contest 50-44 in his favor. 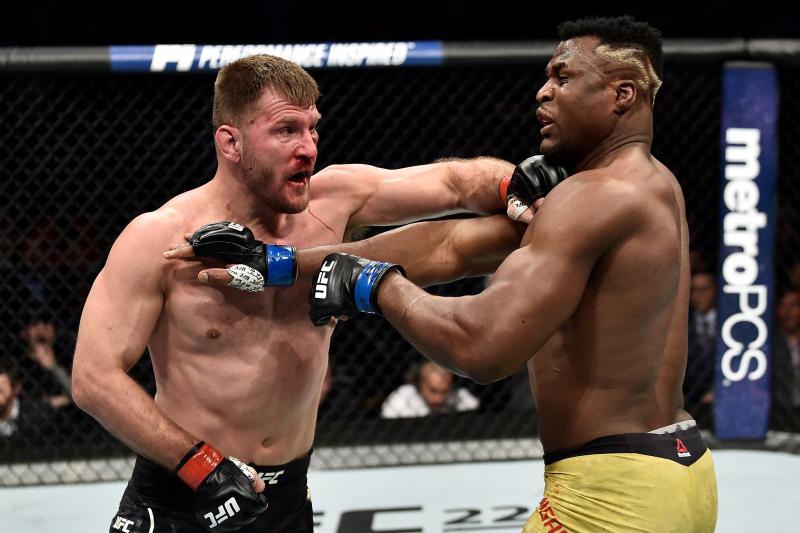 UFC Heavyweight Francis Ngannou is one of the biggest potential stars in the UFC.

Last week Ngannou announced that he is back and ready for his next fight. And he has a special opponent in mind… Brock Lesnar!

In his first interview since UFC 220 loss on the MMA Hour, Ngannou called out the former UFC Heavyweight champion Brock Lesnar.

“I like the fight. He look like — I don’t know if you ever seen this guy, he looks very, very big and strong. And I really want to try that.”

Mark Hunt and Derrick Lewis have both expressed interest in scrapping with recent UFC heavyweight title challenger Francis Ngannou. Ngannou said he is open to fighting either, but made it clear who his first choice is:

“It’s up to what (the UFC) want to give me. There are a lot of people out there who want to fight me. I saw Mark Hunt, he would be a great one. By myself, I want Brock. Brock Lesnar.”

Brock Lesnar, now age 40, last appeared in the Octagon at UFC 200, the results for him were a decision victory over Mark Hunt and two failed drug tests. But Brock didn’t seem to care. He simply announced his retirement, took his million dollar purse, and returned to WWE as the bout was overturned to a no-contest.

However, UFC President Dana White, as not-so-subtly hinted that Lesnar could be making a return in 2018. It’s unclear how a return for Lesnar would be coordinated with doping regulations, but Ngannou seems confident he will get that fight.

“Listen, there are the three ones who want me and me, I want Brock.”

If not Lesnar, “The Predator” also showed interest in testing his hands on heavyweight boxing champion Anthony Joshua, after hearing that the Brit had teased a move to MMA:

“I HEARD ANTHONY JOSHUA SAY HE’S GONNA FIGHT IN MMA AND IF HE WANTS TO FACE ME AND I WAS LIKE, ‘HEY, YOU’RE WELCOME, MAN,’” NGANNOU SAID. “WE GONNA DO IT BOTH SIDES, IN THE OCTAGON AND INSIDE THE RING.”

Who do you think Francis Ngannou should battle next?

WATCH: Dave Palumbo To Kevin Levrone: “I Think You Screwed Up Your Formula”