Many bodybuilding fans are concerned about the future of young and talented Calum von Moger as he once again suffered pretty serious injuries. Calum lost his balance and injured his knee while he was rappelling down a cliff with his older brothers on this past Thursday.

Calum was still recovering from his previous bicep tear and had been making some good recovery progress before the cliff accident. While we didn’t know the extent of Calum’s new injuries, the Australian bodybuilder has released multiple posts that shed some light on his condition—and unfortunately the news isn’t all that great:

“I tore my bicep again when I tried to pull myself up the cliff.

My leg is another story.

I don’t know the full extent of my injuries yet.” 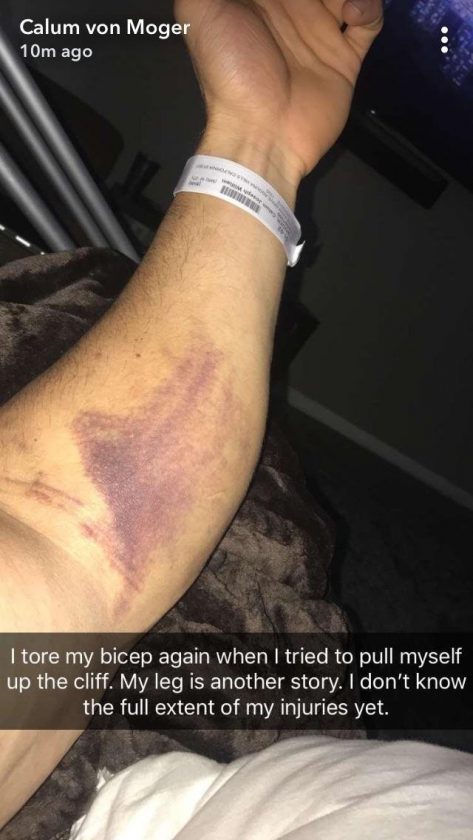 In the second post, Calum shares the extent of his leg injury and what kind of surgery he’ll have to undergo:

“I apologize i won’t be at the @ausfitnessshow in Sydney this weekend.

My accident on Thursday has left me with a complete rupture of my quadriceps tendon, dislocated kneecap & a broken heart.

I’m at the Sydney airport on my way back to LA for surgery. Still in a lot of pain and sucks to be on my own but have to be strong and deal with it as best I can.

Hope everyone has a good weekend and stays safe.”

Calum von Moger has gained a tremendous amount of popularity through the social media from the past few years. The Australian native is well on his way to becoming a world-renowned superstar and champion. But he will have to stop the reckless & non-serious behavior if he ever wants to get his IFBB pro card in the near future.

We hope he will make a full recovery. What do you think of Calum von Moger and this unfortunate injury?