Video: Khabib Nurmagomedov Paying Homeless People Do Push Ups And Then Laughing At Them 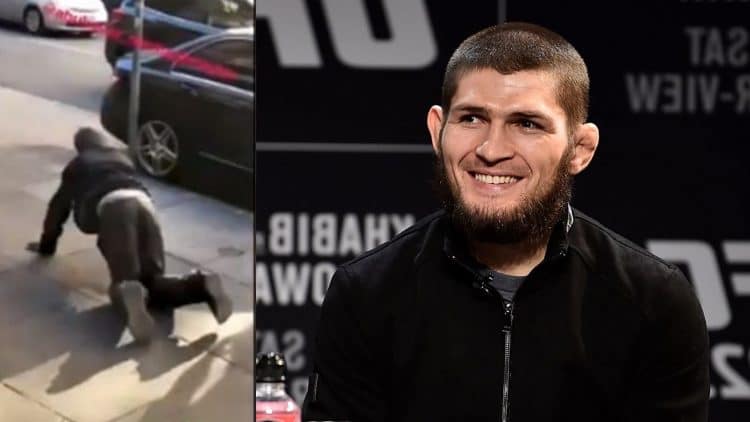 WTH! Khabib Nurmagomedov paying homeless so he can laugh at them?

The UFC lightweight champion Khabib Nurmagomedov may lose some fans over a video he uploaded to his Instagram story recently.

In the following video clip, you see a homeless man doing pushups on the street while ‘champ’ Khabib can be heard laughing in the background like crazy weirdo. As the homeless man completes the given pushups task Khabib continues his laugh for another man, his cousin Abubakar Nurmagomedov interacts with the homeless man, jokingly gets into a fight stance as the man gestures towards him.

The next clip shows Abubakar giving some money to the homeless man while Khabib still can heard giggling. According to our friend at MiddleEasy.com:

“This video seems so dumb it feels fake.

Can Khabib Nurmagomedov possibly be this dumb?”

Personally we feel it's disgusting and degrading.. Especially them constantly laughing at those involved.. 😡 pic.twitter.com/msE5i9ureE

Can Khabib really be this much dumb for making a joke out of people stricken by poverty and then laughs at the people he is humiliating or its just weird joke gone bad?

This past week UFC confirmed Khabib Nurmagomedov vs. Conor McGregor at UFC 229 in Las Vegas’ T-Mobile Arena on October 6. The fight is expected to broke many PPV records.

WOW! Brandon Curry is looking HUGE Weeks Out From Olympia