Understanding the Different Competitive Bodybuilding Divisions For Men and Women 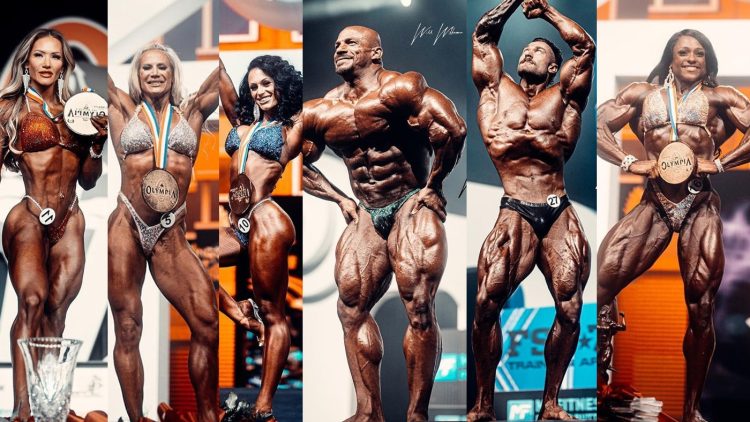 Know everything there is to know about the different IFBB Pro League bodybuilding divisions.

There is a rise in the number of competitors at the Olympia every year. The prize money has been surging consistently. Fans line up in bigger numbers at the meet and greet every year, while the online coverage of contests reaches a larger audience.

Notably, the number of divisions in bodybuilding shows has gone up significantly over the last few years to accommodate athletes with different body types.

However, the influx of new divisions and blurring of lines between the older ones can be confusing, especially if you are new to pro bodybuilding.

If you recently watched your first pro bodybuilding contest, similar-looking bodybuilders competing in different divisions could have probably left you feeling overwhelmed.

Furthermore, a few pro bodybuilders make a division switch every year — adding to fans’ confusion and hinting athletes themselves are perplexed between divisions.

In this article, we will be going over how the 11 bodybuilding divisions differ and how they are judged and scored according to the IFBB Pro league rules.

Must Read: Understanding How Men’s Open Bodybuilding Competitions are Judged and Scored

Most pro bodybuilding contests consist of men’s and women’s divisions. 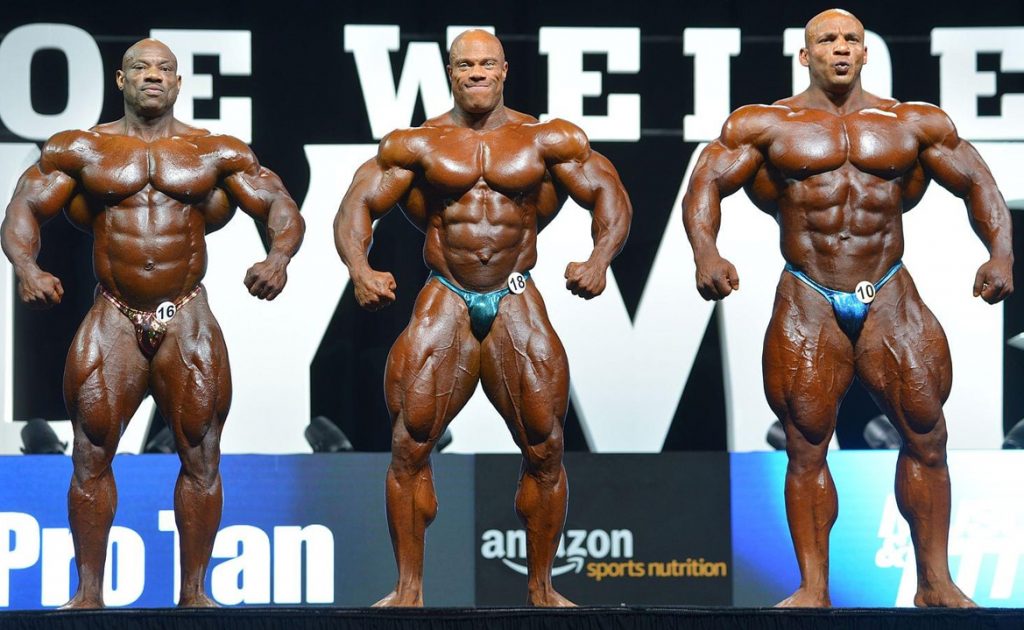 The Men’s Open division is usually the main event of every bodybuilding show. The open division contest is designed to be a freak show as there are no weight or height restrictions.

It comprises the largest and most conditioned athletes. Competitors focus on presenting a big, hard, dry, vascular, and striated physique on the stage. 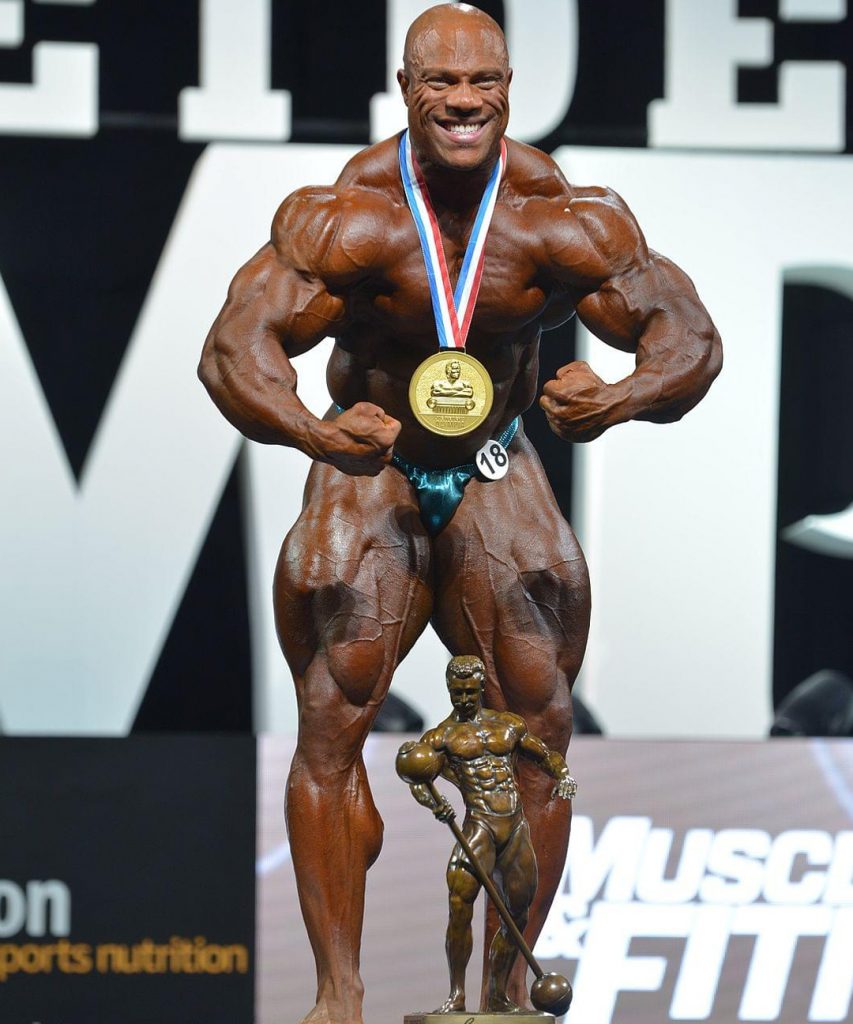 Men’s open competitors are scored based on two rounds — judging and finals.

The judging round includes performing eight mandatory poses and callouts.

The eight mandatory poses comprise of:

The finals include a three-minute individual posing routine and confirmation round. IFBB Pro League uses the scoring system to assess a competitor’s muscle proportion, symmetry, quality, and size. The judging and final rounds weigh equally in the final score.

The winner of the Men’s Open division at Olympia weekend earns the Mr. Olympia title, the coveted Sandow, and a hefty cheque. Additionally, the Mr. O champion is considered the best bodybuilder in the world. 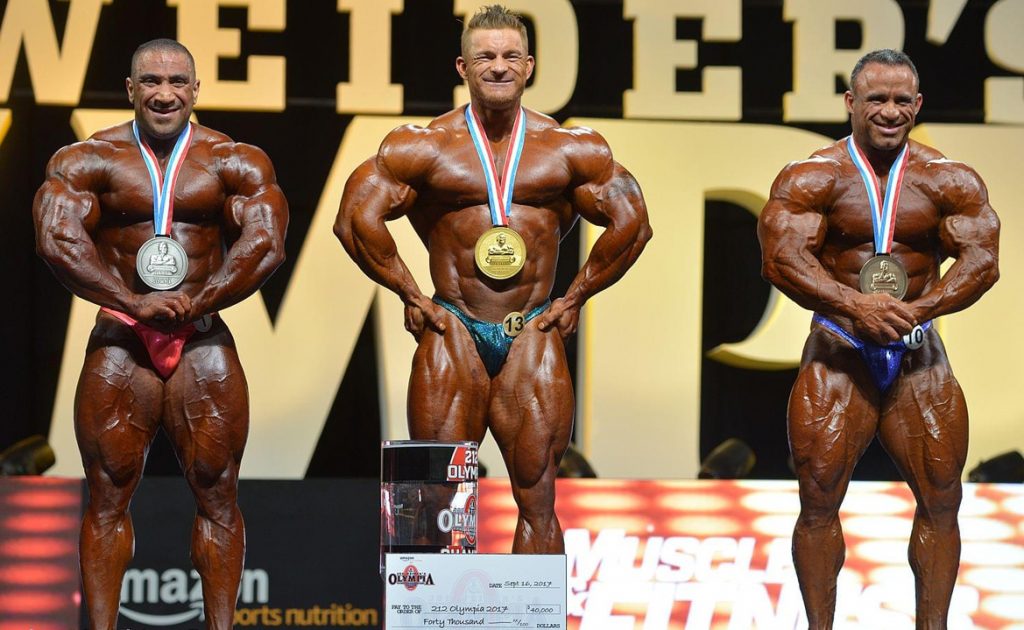 The 212 division was introduced in 2011. It was put in place for shorter individuals who could not accumulate the same muscle mass as their taller counterparts.

When the division launched, the requirements for this class were that the athlete needed to weigh up to and under 212 Lb (i.e., 96.6 kg) and must be less than 166m or 5’5″ in height. However, the height limitation has since been scrapped.

The 212 rules and poses are the same as Men’s Open division, with the main difference being that a competitor has to weigh less than 212 pounds to compete in the division.

This division has fast become one of the most popular contests and is promoted by bodybuilding legends like Arnold Schwarzenegger. The Classic Physique division focuses on bringing back the golden era aesthetics (the 1960s to 1980s) — broad shoulders, narrow waist, muscular legs, and overall conditioning, symmetry, and size.

The six poses include:

The Classic Physique division consists of different classes based on height and weight. Athletes have a weight limit based on their height. 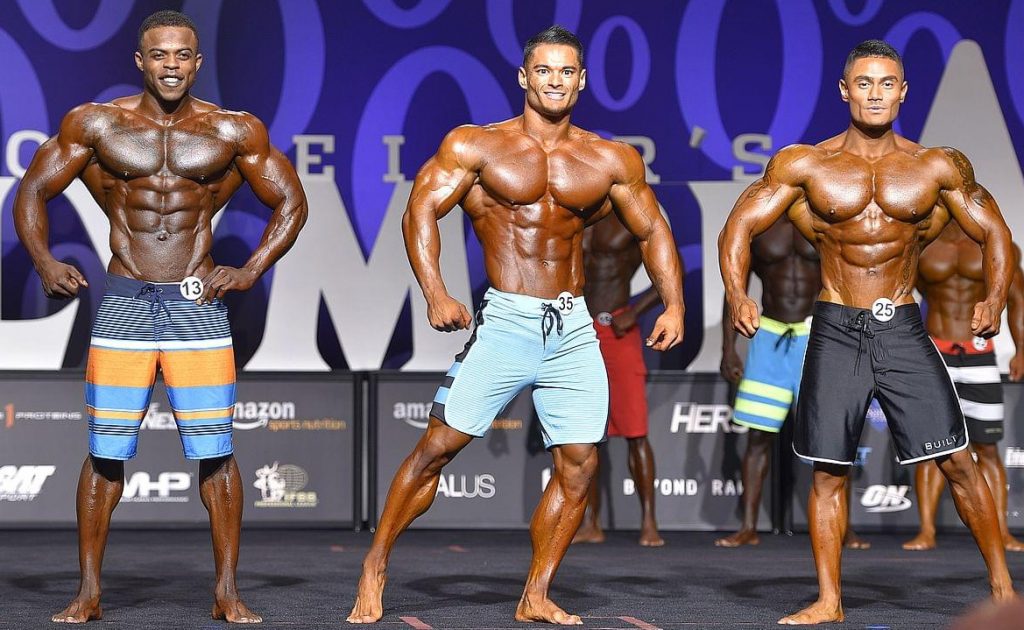 The Men’s Physique division was launched in 2012 for bodybuilders (and fans) who thought the bodybuilding divisions pushed the athletes to get too big. This division combines the muscular, lean look with athleticism and overall aesthetics.

The Men’s Physique division has quickly become one of the most popular divisions for men. Bodybuilders in this division are trying to nail the beach body (model look) and step on stage wearing board shorts.

The judges do not consider a competitor’s leg development in this division. They focus more on the upper body structure, shoulder to waist ratio (52.5″ to 27″ of former champion Jeremy Buendia), arms, calves, chest, back, and shoulders development.

Posing in the Men’s Physique division is different from the other three conventional bodybuilding divisions. Each competitor has to perform a series of back and front turns on stage. The athletes are prohibited from performing the eight mandatory bodybuilding poses on a Men’s Physique stage.

A Men’s Physique contest consists of two rounds — judging and finals (confirmation), and the athletes are scored on their muscle mass, conditioning, proportions, and stage presence.

Within the division, there are different divisions based on height:

The WCBB (Wheelchair Bodybuilding) is the most popular bodybuilding organization for competitors who use wheelchairs. WCBB athletes can earn IFBB Pro cards and compete at the Wheelchair Olympia.

The wheelchair bodybuilders wear loose-fitting training pants on stage and are scored based on their upper body muscle mass, conditioning, and symmetry.

The four mandatory poses for wheelchair bodybuilders include:

There are a total of six women’s bodybuilding divisions in the IFBB Pro League:

Women’s Bodybuilding competitors are scored based on their size, muscle symmetry, and definition. Competitors perform seven mandatory poses and an individual posing routine.

The seven mandatory poses include:

The Fitness division is one of the most dynamic divisions in the sport. This division usually consists of athletes who are bodybuilders, gymnasts, cheerleaders, and dancer hybrids.

The finals include two rounds. In the first round, the competitors perform a two-minute fitness routine wearing a costume. The objective of the fitness routine is to show off an athlete’s physical fitness level and strength.

Competitors in the figure division do not perform conventional bodybuilding poses. Instead, they perform a series of four quarter turns similar to athletes in the Men’s Physique division.

A Figure contest consists of two rounds — judging and finals (comparison round).

Judges are looking for an overall developed physique with good muscular symmetry and proportions. Competitors should display good muscularity and muscle separation but should not be excessively lean. Deep musculature and striations are marked down in the contest.

Hamstrings, glutes, shoulders, and back are the most important muscle groups in the contest.

The Fitness division is the right fit for individuals with genetically wide shoulders and a narrow waist. Additionally, women who have more muscle mass or a tendency to put on muscle easily often do well in the division.

Bikini is arguably the most popular women’s division. They are nothing short of a fashion show. Bikini contests usually have the highest number of competitors in a show.

Competitors in the bikini division have the least amount of muscle mass than women competing in other divisions.

Bikini contestants focus on nailing the beach body (model look). Hence, the athletes are required to build less muscle mass, making it more appealing to a wider variety of women. The division is perfect for women with a small waist, curvy structure, and long, shapely legs.

The Bikini division consists of two rounds — presentation and comparison round. In the presentation round, competitors walk on stage alone and perform their model walk.

Judges score the competitors based on their muscle balance, shape, and overall physical appearance, including complexion, hair, skin tone, poise, and overall presentation.

The Women’s Physique division is perfect for women who pack on muscle easily and can develop better muscle conditioning, definition, and separation.

Interestingly, unlike bikini and figure competitors, Women’s Physique contestants are barefoot on stage instead of wearing high heels.

The Women’s Physique competitors also perform a series of quarter turns and an individual posing routine along with the mandatory poses.

Although competitors in this division have more muscle definition than figure and bikini contestants, bodybuilders with excess muscle mass are negatively marked. The rules for this division note that women competing in the physique class should not be “ripped” or “shredded.”

The Wellness division is the latest addition to the IFBB Pro League. The first Wellness Olympia was held in 2021. Wellness is divided into different height classes.

According to the IFBB Pro League, “This division is for females with athletic physiques that showcase more body mass in the hips, glutes, and thigh areas. The upper body should be developed but not to the same degree as the lower body.”

Now that you understand the different competitive bodybuilding divisions, you’ll know what the judges are looking for in a competitor during a contest.

Also, if you want to compete but are not sure about the division, this article will help you choose the right division according to your body type and goal physique.