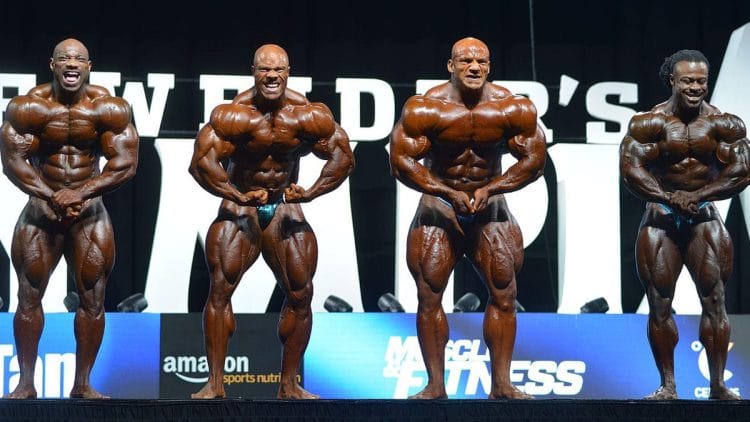 The IFBB pro league has been steadily growing and introducing new divisions, with the wheelchair, wellness, and classic physique divisions being the newest members of the family.

However, the Men’s Open division is the OG bodybuilding contest and continues to be the biggest crowd-puller and most-awaited and hyped competition in any bodybuilding show.

If you love watching bodybuilding shows but cannot seem to wrap your head around how they work, you are not alone. While bodybuilding contests are gaining traction, their complex judging and scoring system can make them feel overwhelming.

Because of their subjective nature, bodybuilding shows can be hard to judge. Picking a winner in a bodybuilding show requires looking at every competitor under a microscope — to inspect the minutest physique details and examine the smallest flaws.

Below, we go over the parameters on which the pro bodybuilders in the Men’s Open Division are judged and scored.

According to the IFBB Pro Rules for Men’s Bodybuilding, pro bodybuilding contests consists of two rounds:

The judging round makes up 50% of the “Final Score” and consists of three stages:

The men’s open division begins with the judges calling each contestant onstage individually in numerical order. The competitor has 60 seconds to perform the following 8 mandatory poses in the order shown:

All contestants are called onstage in numerical order and divided into two equal-size groups positioned on either side of the stage in diagonal lines. The center stage area is left open for comparisons and posing. The head judge then directs groups of competitors in numerical order through the quarter turns and mandatory poses.

Judges constantly shuffle the competitors to compare them against each other. The number and placement of competitors in the callouts are at the discretion of the head judge. The competitors called out in the first and the last callout are usually the frontrunners for winning the show.

The Finals make up 50% of the “Final Score” and consist of two rounds:

Each competitor has up to a maximum of three minutes to perform a posing routine to the music of their choice.

All contestants are called onstage in numerical order and divided into two equal-size groups positioned on either side of the stage in diagonal lines. The center stage area is left open for comparisons and posing.

The head judge begins the confirmation round by calling out selected competitors. Bodybuilders are compared against each other as they perform the quarter turns and mandatory poses.

The confirmation round is wrapped up with a 60-second posedown between all competitors.

These are the main criteria the judges focus on while scoring a contestant in the Men’s Open division:

While assessing muscle mass, judges are looking for developed muscles with full and round muscle bellies. Developed muscles allow the jury to accurately critique a bodybuilder’s musculature, symmetry, and conditioning. Besides, fuller and larger muscles display better separation and striations.

Judges also need to see striations, density, and definition (muscle fibers) while a contestant is posing on stage. A bodybuilder who has a lot of muscle mass but is holding water and appears “soft” rarely wins a bodybuilding show.

Many competitors manipulate their water and carb intake to drain as much water as possible from between their muscles and skin to give a grainy, dry, and peeled look. 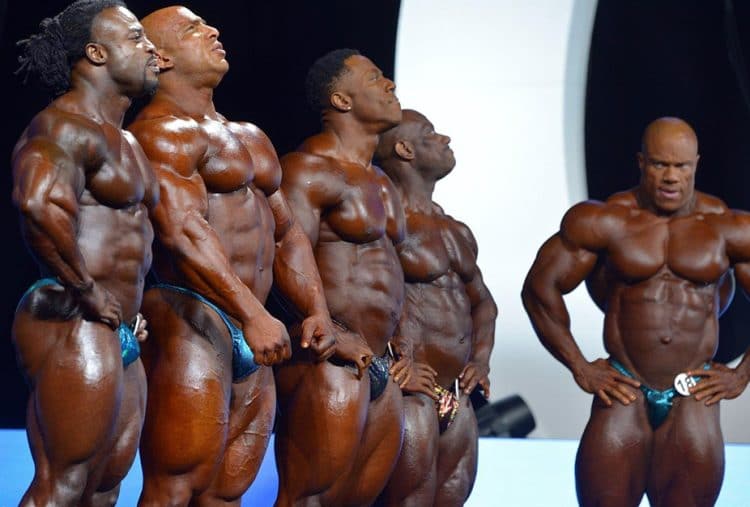 Muscle symmetry and balance can make or break a physique. If a bodybuilder has giant legs but lacks size and definition in his arms, they will not go too far in their competitive bodybuilding journey. Judges are looking for a well-proportionate, symmetrical and balanced physique.

Let’s take this opportunity to address the elephant in the room — genetics. Genetics plays a big role in your bodybuilding journey. Genetics determine the shape of your muscles and their insertion points. You cannot alter these factors no matter how hard you train or diet.

Judging in Bodybuilding vs Other Competitive Sports

Difference Between Judging in Bodybuilding Shows and Most Other Competitive Sports

Competitive bodybuilding is a unique sport in how it is judged. It is subjective and does not have clear-cut rules or set standards to determine a winner.

However, bodybuilding works in the exact opposite way. The competitor with the lowest total score at the end of the show takes home the gold.

Here are a few possible ways of making the scoring at pro bodybuilding shows more objective:

1. Have set guidelines and standards to match the competitors against. Instead of rating the muscle proportion, symmetry, size, and quality subjectively, scoring the different aspects of a competitor’s physique on a scale of ten could make the process more objective.

2. Release each judge’s individual scoring card along with the “Official Final Result Scorecard” for better accountability. Access to this information will tell us what the judges thought about each bodybuilder and how they scored them in each round. It will also help us step into their shoes and learn about their vision of the “perfect bodybuilder.”

Competing on a pro bodybuilding stage is physically intensive and requires the competitors to go through multiple judging rounds. A couple of Men’s Open bodybuilding shows like Mr. Olympia and Arnold Classic USA happen over two days and require the contestants to nail their conditioning on both days, making the show even harder.

Moving from the present subjective scoring system to an objective one could make the process more transparent and add accountability. Additionally, recognizing physique benchmarks can help steer away from aesthetically unappealing physique characteristics like bloated gut and gyno.