Revisiting the story of the biggest women's bodybuilding show and its champions. 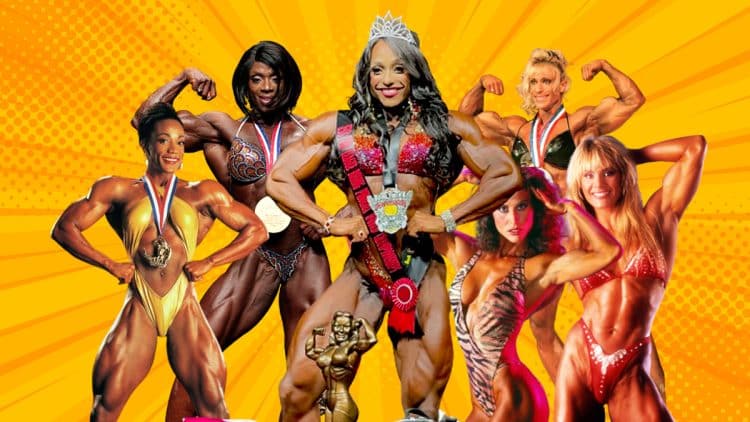 However, it wasn’t the only time the Ms. Olympia contest received a step-motherly treatment. Ms. Olympia was discontinued in 2014. Waning fan interest and plummeting ticket sales were the reasons cited by the Olympia management for bringing down the curtains on the apex women’s bodybuilding contest.

The deserted elite female bodybuilders were taken in by Rising Pheonix, which established itself as the primary women’s bodybuilding show. It wasn’t until the Rising Pheonix promoter, Jake Wook, took over the Olympia brand in 2020 that the Ms. Olympia contest returned to the Olympia Weekend.

Intrigued by the show already? We are just scratching the surface. Like the men’s Open bodybuilding circuit, the women’s bodybuilding division has undergone significant changes over the decades.

The first few Ms. Olympia winners looked significantly different than the current Ms. Olympia champ Andrea Shaw. You could compare Rachel McLish (Ms. Olympia 1980 and 1982) to the present Bikini Olympia contestants. Whether it is a good thing or bad is for you to decide.

This article goes over the history of the Ms. Olympia contest, the different eras, and the 12 women who have worn the Ms. O crown over the past four decades.

Given below are the annals of the Ms. Olympia contest:

1980 was a much-hyped year for the Olympia. Arnold Schwarzenegger was coming out of retirement after four years to stake a claim on his seventh Mr. Olympia title.

Miss. Olympia, as it was initially called, was held in Philadelphia, PA, in 1980 and saw Rachel McLish winning and becoming the first Ms. Olympia. McLish was dethroned by Ritva Elomaa in 1981 but regained her title in 1982 when the show moved to Atlantic City, NJ.

Although McLish won the Ms. Olympia title in 1982, things were changing under the hood. George Snyder lost the rights to Ms. Olympia in 1982. Until 1982 contestants were hand-picked to compete at the Olympia. However, this changed in 1983, and the contestants had to qualify for Ms. Olympia through placings in lesser contests.

The qualifying process made way for more muscular women to book their spot at the Olympia. A more jacked and diced Carla Dunlap won the 1983 Ms. Olympia contest convincingly.

The Ms. Olympia contest was held outside the United States for the first time in 1984. It was game over for all other contenders as soon as Cory Everson walked on stage at the 1984 Ms. Olympia showdown in Montreal, Canada. Everson was the biggest and the gnarliest female bodybuilder anyone had ever seen until that point.

Returning champion McLish finished runner-up, and the defending champion Dunlap took home a humble fourth place. Everson got the crowd talking after she dominated the Olympia roster on her debut.

Everson won six consecutive Ms. Olympia titles before retiring in 1989. She is the only female pro bodybuilder to have retired undefeated.

The six-time Ms. Olympia champ turned to acting after retirement. Her first major movie appearance was Double Impact (1991) alongside Jean-Claude Van Damme. She also appeared in Natural Born Killers (1994) and Ballistic (1995). Additionally, Everson made several guest appearances in television series, most notably playing Atalanta on Hercules: The Legendary Journeys. She appeared in two episodes of The Adventures of Brisco County, Jr. with her sister, Cameo Kneuer.

Everson hung up her posing suit while at the top of the pro bodybuilding circuit. It left the doors open for others to capture the Ms. Olympia throne that had been off-bounds for six long years. Interestingly, it was the first time the Ms. O throne had no defending champ.

Although Bev Francis had been lurking around the Ms. Olympia throne for a while, Lenda Murray surprised everyone and seized the title with her size, conditioning, and posing skills on her debut.

While many bodybuilding fans were expecting Francis and other elite bodybuilders to grab the Ms. O crown from Murray, Murray held onto the title for six consecutive years, matching Everson’s record.

The 1991 Ms. Olympia was the first to be televised live. Murray beat Francis by a single point.

The IFBB believed that Murray and Francis were taking female bodybuilding too far with their size and introduced “femininity” rules to penalize female bodybuilders for being too big.

Nonetheless, Murray met the femininity requirements and managed to retain her title. Murray’s win made the IFBB walk back on the newly introduced “femininity” rules.

1993 witnessed a fierce battle between Murray and Rutkowski for the Ms. O throne. Many experts opined that Rutkowski should have been crowned Ms. Olympia that night.

Rutkowski stunned the bodybuilding community by retiring in 1994; many saw her as a future Ms. Olympia champ. Retiring from competitive bodybuilding didn’t fare well for Rutkowski. She was soon diagnosed with bipolar disorder and arrested for drug abuse (hormonal and psychedelics).

Just when everyone thought Murray had a vice-like grip on the Ms. O throne, the unthinkable happened in 1996. After placing runner-up in 1995, Kim Chizevsky beat the six-time Ms. O champ in 1996 to win her first Olympia title.

Although Murray returned for a rematch in 1997, Chizevsky held her off, thanks to her impeccable conditioning and muscle symmetry. Her second loss didn’t go down well with Murray as she retired from competitive bodybuilding after the 1997 Ms. O showdown.

Many believe that Chizevsky’s husband (and coach) Chad Nicholls was one of the driving factors behind her wins. Chizevsky held the Ms. O throne for four years before retiring from the division. She competed in the Fitness division from 2001 to 2002 and the Figure division from 2003 to 2004.

The year 2000 saw several changes made to the Ms. Olympia contest.

The Ms. and Mr. Olympia contests were held on different dates until 2000. However, in 2000, the IFBB combined the two to form the Olympia Weekend. Additionally, in a first-of-its-kind move, heavyweight and lightweight classes were added to the female bodybuilding division. Lastly, new judging criteria were introduced for the female bodybuilding contest, which asked the judges to assess the contestants on “symmetry, presentation, separations, and muscularity BUT NOT TO THE EXTREME.”

Lightweight (up to 135 pounds)

Note: The two divisional winners did not face each other to determine an overall champion, making 2000 the only year with two Ms. Olympia champs.

After making her Olympia debut in 1990 with a runner-up finish, Kyle had a humbling performance in 2000, as she took home a fifth-place finish. However, she returned with vengeance at the 2001 showdown and took gold in the heavyweight division.

On the other hand, Juliette Bergmann pulled a win in the lightweight division on her return to the Olympia stage after not competing since 1989. Furthermore, she defeated heavyweight winner Kyle for the overall Ms. Olympia title.

In the five years that Ms. Olympia was contested in multiple weight classes, this was the only time that the lightweight winner took the overall title.

After a five-year hiatus, Murray recognized an opening in the Ms. Olympia roster and decided to make a comeback in 2002. It’d be safe to say that her bet paid off handsomely as she matched Lee Haney’s record for the most Olympia title wins — eight!

Murray won the heavyweight class by dethroning Kyle. Furthermore, she dealt the reigning champion, Bergmann, an upset to capture the overall Ms. Olympia throne. She repeated the feat in 2003.

After a long and hard-fought battle with Murray, Kyle finally broke through Murray’s defenses to win the heavyweight class. She then beat Dayana Cadeau to win her maiden Ms. Olympia title.

The weight class system for the Ms. Olympia contest was abandoned in 2005. The IFBB also introduced the ’20 percent rule’ which stated “that female athletes in bodybuilding, fitness, and figure decrease the amount of muscularity by a factor of 20%”.

The three-time third-place finisher in the heavyweight division Yaxeni Oriquen-Garcia outclassed her competition at the 2005 Olympia Weekend to dethrone Kyle and win her first Ms. O title.

Kyle returned to the drawing board after losing her Ms. O throne. She showed up at the 2006 Olympia Weekend in the best shape of her life. What happened next is the stuff of legends. Kyle won for nine consecutive years and retired with 10 Olympia titles — the most by a bodybuilder in any division.

In 2014, the Olympia management decided to pull the plug on the Ms. Olympia contest citing lackluster ticket sales, waning fan interest, and a fall in athlete participation.

After the Olympia brand changed hands and Jake Wood came at the helm, bodybuilding fans were expecting a return of the Ms. Olympia contest at the Olympia Weekend. The Rising Pheonix promoter did not let the fans down.

The Olympia management did a commendable job organizing the Olympia Weekend amidst COVID-19 in 2020. The Rising Pheonix World Champion Andrea Shaw dominated the competition to win her maiden Ms. Olympia title in 2020. She defended her throne in 2021 to become a two-time Ms. O champion.

Shaw completed a three-peat at the 39th edition of the Ms. Olympia contest. She brought her signature size, symmetry, conditioning, and muscle separation to the O stage, which was too much to handle for the other competitors.

Trevino, who went through shoulder surgery in early 2022 and subsequent surgery, managed to secure a third-place finish at the 2022 O, while Angela Yeo took home a runner-up finish in her debut Olympia appearance.