After they both lost to Ryan Gordon, Martins Licis and Hafthor Björnsson decided to have their own sparring session. 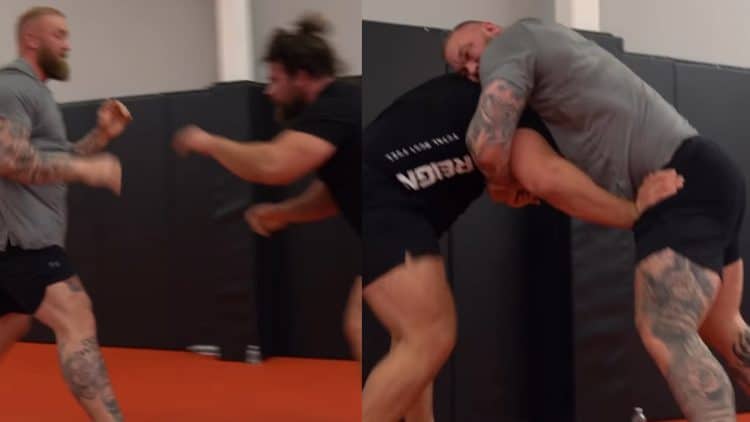 Martins Licis, Hafthor Björnsson, and Ryan Gordon are all highly accomplished individuals in their respective fields. Ryan Gordon is known as one of the greatest Jiu-Jitsu athletes and overall grapplers in the world, while Hafthor Björnsson is a former Strongman competitor who won the 2018 World’s Strongest Man contest. Martins Licis followed in Hafthor’s footsteps and won the WSM just one year after as well.

Martins Licis and Hafthor Björnsson tried out Jiu-Jitsu, and they had the chance to train with Ryan Gordon, who is considered one of the best Jiu-Jitsu practitioners in the world. Despite being smaller in stature than Björnsson and Licis, Gordon was able to demonstrate his superior skills and techniques, making it clear why he is possibly the Greatest Of All-Time.

However, the collaboration between Martins Licis and Hafthor Björnsson was not just about competing against each other. In fact, they decided to have some fun by battling it out in a friendly sparring match. Both men put in a tremendous effort to attack and defend themselves, but Licis was able to drop Björnsson on his back. Licis posted a full video to his YouTube channel, but he also shared a short clip of him battling Hafthor on Instagram. Martins also made a voiceover through which he explained his thought process.

Watch The Two Strongman Go At Each Other Here:

Before they got to the point of battling against each other, Licis and Björnsson got some tips from the man himself, Ryan Gordon. He first taught them about side control and advised them on switching positions in order to take control.

“People this big and strong shouldn’t be allowed to learn Jiu Jitsu. It’s like cheating,” stated Gordon, amazed by the size of Licis & Björnsson.

Martins Licis then decided to try and roll with Ryan Gordon, which he ultimately ended up surrendering after Gordon got him into an arm lock. After some rest, Licis and Gordon started another duel, which Martins surrendered once again, but this time due to a rear naked choke.

Then came the time for Martins Licis to take on Hafthor Björnsson. Although the match was pretty even, Licis was clearly much more gassed by the end of it, probably because Hafthor has built his endurance through boxing. Finally, they all wrapped their arms around each other in a friendly way and Martins Licis wrapped up his video.

“I’m gonna take a long nap. Thor and I got humbled today… but now I am inspired to get through some more Jiu-Jitsu.”

Martins Licis recently captained Team USA at the 2022 World’s Strongest Nation contest, but unluckily for him, they lost to Team UK. However, he has had a very productive year, having placed second at the 2022 WSM, as well as winning the 2022 Arnold Strongman Classic. However, judging by the lineup for the 2023 Arnold Strongman Classic, Martins will not be coming back to defend his title.

Hafthor Björnsson, on the other hand, has retired from boxing and has had his powerlifting comeback. Björnsson also further improved his old Weight Over Bar World Record, which could be just the start of his full Strongman comeback.

Both Licis and Björnsson looked really interested in Jiu-Jitsu, with Martins even thinking about starting to train seriously for at least a year or two. So, if that is the case, Licis could take a path similar to Hafthor’s, and become an expert in one martial art.

Samson Dauda Reacts to 6th Place Debut at 2022 Olympia: I’m Over The Moon and Truly Honored’