The third and final part of the Buttery Games tested the strength of the participants, as well as their endurance. 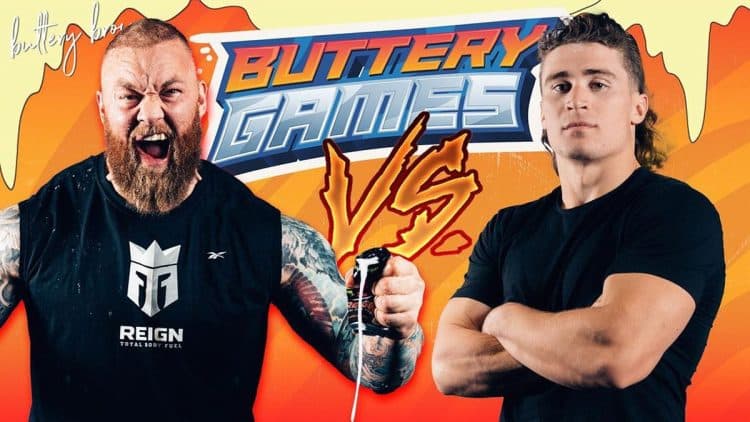 The Buttery Games has proven to be a very entertaining show in the first two parts, bringing together the greatest athletes from multiple sports such as Strongman, CrossFit, bodybuilding and more. The finale of the show was one of the most anticipated events since the overall winners would be revealed. In this third part, the athletes took on a grueling CrossFit workout that tested their strength and endurance, as well as a truck pull and a series of deadlifts.

The first Buttery Games video displayed tests of speed in the form of a relay race, beep test, and a truck race. While the second part saw the participants test their skills with a ninja obstacle course, shots on a basketball hoop, and a fun challenge to end it all.

The partnership of Justin Medeiros and Sophia Rose has looked incredible since part one, which culminated with them winning the inaugural Buttery Games edition.

Alison Scudds and Jujimufu gave it their all to win the show, but settled for second.

Rob Kearney and Alex Gazan narrowly outperformed two other teams to round up the top three.

The first event of the final Buttery Games part was extremely hard for the Strongman athletes, who are not used to this format of exercising out. So, Hafthor and his wife Kelsey had to pull out from this event, as The Mountain was not feeling well. However, to no surprise at all, the 2x reigning CrossFit Games winner, Justin Medeiros, and his teammate, Sophia Rose, crushed the workout and got first place.

Finishing in second place were Alison Scudds and Jujimufu, proving to be quite a deadly partnership. The partnership of Wells and Licis narrowly beat Gazan and Kearney, finishing the final row less than ten seconds before.

The second test of the final Buttery Games part was the truck pull. This meant that the participants had to pull a truck for a length of 80 feet in the quickest manner possible. The truck pull has always been a reliable strength test, which is why the Buttery Bros decided to implement it into their show.

To no surprise at all, the two former World’s Strongest Man winners, Martins Licis and Hafthor Bjornsson, battled for first place. Coming down to the wire, Licis and Wells took the top spot, while Hafthor and Kelsey settled for second.

Third place went to Gazan and Kearney, in spite of Rob’s shoe falling off during the competition. In spite of this, he continued to push, which proved to be an important factor.

The first test was endurance, while the second one was strength. So, the third and final challenge of the Buttery Games was a mix of both, featuring a format of deadlift for max reps in one minute. They had the opportunity to choose between men deadlifting 225-lb and women 135-lb, or the second option which would see men deadlift 275-lb, while the women would lift 85-lb. So, the combined deadlift weight for the teams came out to 360 pounds either way.

Ellie Turner replaced Sophia Rose as Justin Medeiros’ teammate in the final event and the duo managed to come out on top.

Scudds and Jujimufu had just two repetitions less, which meant that they took second place.

The third place went to the only other team that did over 100 reps, as Gazan and Kearney put up an incredible performance.

Related: Martins Licis, Justin Medeiros, And Others Try Out Ninja Obstacle Course In The Second Part Of Buttery Games

The Buttery Games were evidently a great success, so it is likely that they will come back for another season. The mixture of world class athletes, all possessing incredible abilities in different sports, was very entertaining, especially since it felt very competitive.