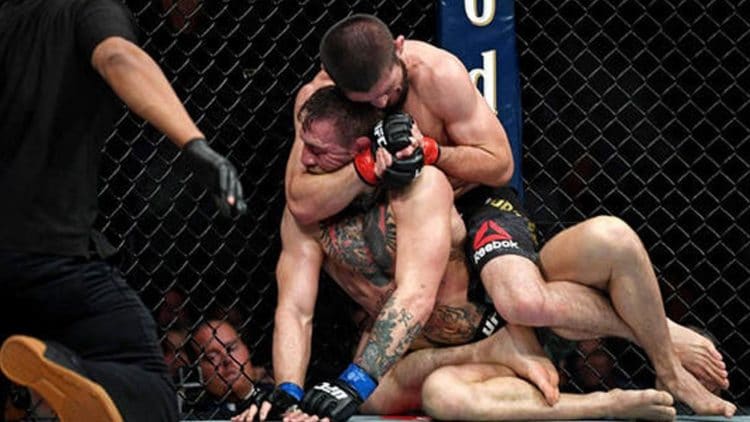 UFC 229 Pay-Per-View went down last Saturday (Oct 6, 2018) from inside T-Mobile Arena in Las Vegas, Nevada and we have got see some great action in the main event. Undefeated Khabib Nurmagomeov defeated former two-division champion Conor Mcgregor via submission via fourth-round neck crank and of course this fight break all the previous UFC PPV records. Most of you must have noticed during the fight Khabib was talking to Mcgregor, and the hot mic has picked up some great audio.

Well, it was a bit disappointing to hear McGregor telling ‘Eagle’ that it was “just business,” that means all his pre-fight trash talk and hype was fabricated to help generate pay-per-view buys.

In the build-up of UFC 229, Mcgregor insulted Khabib on many occasions from family to religion to the country and even offer to drink his newly released Whiskey, well you can say that bit disrespectful.

For Khabib it was all personal, who fully revenged inside the cage have Mcgregor to tap out and after picking up a victory over Irishman jumped over the cage fence to attack Mcgregor’s cornerman Dillon Danis (who allegedly hurled some anti-muslim slur toward Khabib) that sparked the riots inside and outside the Octagon.

One team member of Khabib’s camp Zubaira Tukhugov who also jumped inside the Octagon and punch Mcgregor. UFC head honcho Dana White expressed his disgust on post-fight melee and said those goons who were involved in mayhem would no longer be part of UFC.

After losing a match, Mcgregor calls for a rematch; sure thing this could happen down the road if UFC settles his issues with Khabib and his teammates. If nothing goes in a right way, UFC may promote Tony Ferguson a new lightweight champ.

If UFC fired Khabib’s teammate, then Russian is ridding himself too that would be such blemish on promotion for letting go of great fighter on the planet.

Let’s wait and see how this Commission thing plays out for Khabib and what Dana White decides about thing whole Khabib’s teammate drama.