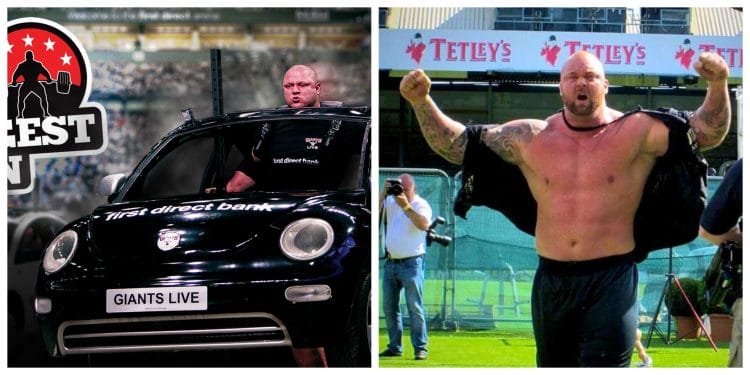 As we enter the final countdown towards the Arnold Strongman Classic, that’s happening this Friday and Saturday, it’s time we take a sneak peek at April 6th.  Then, the strongest guys in Europe will be competing in Leeds, England at Europe’s Strongest Man.

This year will be extra-super exciting as it will also be holding a log lift championship which will allow competitors from none European countries to compete. If that wasn’t awesome enough, guess which famous, huge and strong youtuber got a “wild card” invite to compete at the log lift championships? Nope, not Brad Castleberry….even better, Larry motherfucking Wheels! Yep, he’s been training with The Mountain in Iceland since January and he’s looking to issue a statement with his performance, that the Age of Wheels is upon us. All that and many more, now let’s break this down.

First let’s start with the events;

This one is going to be the money shot, Big Z’s record is on the line and a lot of dudes have been gunning for that magical 230kg. Last year Eddie Hall tried to break Zydruna’s record with a sliced foot but failed.  Here’s the log lift king, Zydrunas Savickas doing 228kg in 2015.

Remember, this event has is an open invite. Iron Biby(attempted the world record last year), Rob Kearney(working intensely on log lift), Robert Oberst(American log lift record holder) Brian Shaw(do I really need to explain who Brian Shaw is?) + Larry Wheels…who is Larry Wheels. With that in mind, it’s a pretty damn good chance that this year we will be crowning a new log lift king.

Since the weight in this event is fixed, this should mean it’s a max amount of reps for a set time or until you don’t have any more reps in you. The axle bar is heavier than the regular bar, thicker and will quickly start to drain your grip strength and energy. Terry Hollands holds a record in this events(at least that’s what youtube tells me), at 260kg with a double overhand grip.

Since he’s competing this year, I’m guessing all eyes will be on him when this event comes. Even without Hollands, the competition is stacked for this year with a lot of strong deadlifters, so don’t expect anyone to be slouching on this event.

This a medley event in which I’m guessing time will be the deciding factor when declaring the winner. The guys will first have to flip a massive tractor tire a set amount of times then get over to an even bigger chain and drag that sum bitch for whatever the distance is. Usually, you get about a minute or so in these kinds of events so I’m guessing that will also be the case here. Here’s Eddie Hall performing the “flip and drag” when he was preparing for WSM two years ago.

The event will be closing with two Strongman classics. The pillars static hold and the dynamic atlas stone lifts. It’s still unknown if the guys will literally have to be holding two pillars or will two cars or something entirely else be put instead. This event will show who wants this more because it will come down to pain endurance and mental strength. Once you grab a hold of those holding pads it’s time to bite down, dig deep, go to a dark face and face the pain. Looking at some footage of previous events where guys had to do this grueling test of endurance, the smart money is on actual pillars being used.  Here’s a classic for ya, Phil Pfister winning the event and predicting his own WSM title win, which he eventually won five years later.

The legendary Atlas stones, it doesn’t get any more Strongman than this. This is also a timed event in which guys usually go head to head against each other. You get 60 seconds to place 5 stones, to a podium.  I can not with a 100% certainty say if the stones get heavier as you near the end of the run or they stay the same weight, either way, it’s hard as fuck to move those stones. The guys make it look easy, but I don’t see how lifting a 300 lbs piece of smooth rock is easy.  Here’s Eddie Hall winning Britain’s Strongest Man in 2017 by beating( think)Mark Felix in the Atlas Stones.

Alright, now let’s see the dudes that will be moving these heavy ass objects and making it look easy in the process.

Just from skimming through the names you see there’s a lot of British guys here, all top tier Strongman. Hicks won Britain’s Strongest Man this year, Stoltman brothers are super strong(Luke is 5x timed Scotland’s Strongest Man) and I’m just scratching the surface here! Don’t even get me started on Mateusz or Hollands who is 6’6” and built looks like a monster. So yeah…Europe’s is going to be stacked this year.

As to who will be the winner, well it’s a bit too early to tell. Also, got to leave some material for a prediction article. Can’t blow my wad on the previews.However, I will leave you with this.

This weekend’s Arnold will be answering a few questions. All eyes are on Mateusz and Thor as far as the European guys go. Will Thor’s reign of terror comes to an end? Will he get injured? How good is Mateusz’s deadlift these days? Will he manage to shock everyone and win the entire tournament?

All questions that will be answered very soon and will determine who has the biggest chance of winning.

Also, I got a gut feeling the new Britain’s Strongest Man-Graham Hicks, could be making his way to a top 5 or even top 3 spot at this year’s Europe’s.