Magne from Norway crushed a massive deadlift to kick off a new decade. 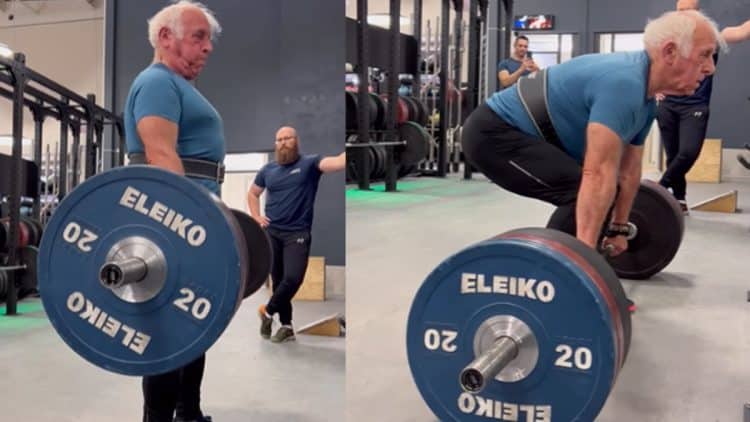 In modern times, powerlifting has grown into one of the most inclusive sports regarding age divisions. This is mainly due to the fact that powerlifting is an extremely diverse sport, and we get to witness incredible lifts performed by people who are still in their teens up to seniors who have lived eight or nine decades. Moreover, every feat of strength is special in its own way, regardless of the lifter’s age.

Lately, powerlifting got more popular amongst older citizens. So, John LaFlamme, David Ricks, and many more gained popularity for their achievements and the hard work they put in. A person does not need to be a professional to make an impression on someone, as recently demonstrated on Instagram. In this case, a video of an 80-year-old man, who was identified as Magne from Norway, went viral. This was because Magne managed to score a new deadlift PR of 150 kilograms (330.7 pounds).

Although Magne did use lifting straps to aid him in the lift, his new PR is no less impressive. In addition, he also equipped himself with a lifting belt as well. Magne’s stance for this lift was conventional. Upon scoring a 150-kilogram (330.7-pound) deadlift PR, he also walked a few steps forward while still holding the bar in the upright position. Magne then placed the fully loaded bar on the rack and took a few deep breaths.

Magne’s last name is currently not known. However, we do have some information on him and his lifestyle. Magne is a member of Sats Norge, a training group/program, whose official Instagram page initially shared the remarkable deadlift feat. They stated that Magne planned to attempt this on his 80th birthday. There is no doubt that it was a major success, and Magne was able to celebrate his birthday with a new PR. Aside from that, Magne is apparently training to help his physically disabled wife. The specifics, like Magne’s bodyweight at the time of the lift, were not revealed.

“His wife is physically handicapped, and Magne is therefore training to be strong enough to help her so that she can continue to live at home.”

Magne’s new PR is both impressive and motivating due to both his age and his reasons for getting to where he is now. It combines romance and sport, so Magne definitely has everyone rooting for him to succeed.

Magne definitely won’t slow down after deadlifting 150 kilograms (330.7 pounds). After his achievements helped him break through to the big stage, perhaps he will show up more frequently. Regardless, we wish Magne a happy birthday and even more success in the future.

Jonathan Cayco, popularly known as “Mr. Bench,” is coming off an unsuccessful run at the 2022 IPF World Championships. Cayco...