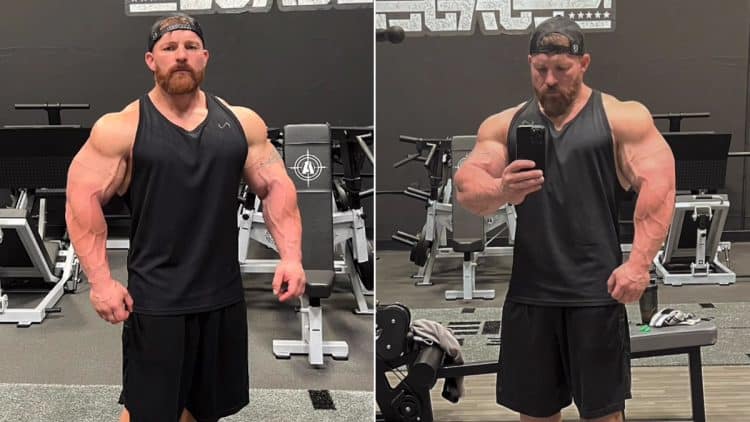 Flex Lewis, the most successful 212 bodybuilder to emerge in the IFBB Pro League is checking in with fans after starting a new testosterone replacement therapy protocol. In a recent post made to Instagram, Lewis showed off a ripped physique update weighing 214 pounds in retirement.

“I have been working on my levels and certain health markers to come down, nothing crazy just things I wanted to see lower that only come with time,” Flex Lewis shared.

In 2012, Flex Lewis secured his first Olympia title in the 212 division. During his celebrated tenure, he managed to win a total of seven Sandow trophies, which he won consecutively from 2012 – 2018. Lewis was highly respected during his career due to his work ethic and the granite conditioning that came with such a demanding schedule.

The seven-time 212 Olympia winner decided to hang up his posing trunks in May. Before the decision to retire, many fans thought he would take his talents to the Men’s Open division. However, reigning 212 Olympia champion Derek Lunsford ended up getting the special invitation, which was originally being held for Lewis prior to his retirement announcement.

Lewis shared a downsized physique update in June; he weighed 213.6 pounds. Then, in July, revealed another impressive update. In his latest post, the former 212 Olympia kingpin said that he’s training three to four times a week and recently started a new TRT protocol, which he described as personalized and fixed.

Note: Fitness Volt does not condone and/or recommend the use of recreational or performance-enhancing drugs. This article reports on information relayed by the athlete/subject. Fitness Volt is not a medical resource and the content presented to you is for informational purposes only.

Flex Lewis Shares New Update on TRT: ‘All Transparency No BS This is My Starting Point’

TRT started Monday I have truly worked hard to get all my blood work all in line no fancy sponsors, or clinics to promote just a local Doctor that has been working with me since I retired.

I have Been working on my levels and certain health markers to come down, nothing crazy just things I wanted to see lower that only come with time, I am not gonna lie it has sucked but like eveyrhing it’s a mindset thing, the sacrifice has been on my testosterone and estrogen and that is why I now started a fixed and personalize protocol.

All transparency no BS this is my starting point and one I want to continue on with.
I know I’m gonna have some guys who are gonna say “BS” I ain’t claiming to be Mike Ohearn (mad props to Mike) I am saying that I’ve given my body a incredible break and but it’s time As I feel my body is not working optimally, and the numbers show it, but I do feel good not great, but now it’s time to aid my health not a enhance a look.”

Moving forward, Lewis wants to keep his fans and followers up to date with his physique while in retirement. He doesn’t plan on competing anytime in the future and added that more training footage and podcasts are on the way.

“No competing anytime in the future before anyone in the comments asks for a come back!

I am healthy inside more than out with injuries as most know and documented. I mentioned in my last update July 23rd (see last post) I extended time off to make sure after 18yrs of competing I was all good and with a 4 month old and a 6yr old children I want to be on this earth longer.

I wanted to keep everyone in the loop as promised. Believe me or not I don’t give to fucks. What have I got to gain in saying this more so get BS from it, BUT in honor of being true, honest and transparent for others to follow in doing this post. I keep covered up 98% of the time so I guess it’s me saying this is what is under it lol
Maybe I will start wearing more tanks now I am skinny Flex

Good news is more training footage to follow, along with podcasts (which I am truly enjoying) along with some new very exciting endeavors sprinkled in.” Flex Lewis wrote Wednesday.

Lewis has remained busy in retirement and owns The Dragon’s Lair, one of the most popular bodybuilding gyms in the world. In one of his recent training sessions, Lewis led social media influencer Dan Bilzerian through a demanding shoulder workout.

While transitioning to a new life has been difficult for a lifelong competitor like Flex Lewis, he’s happy to be working on his health in retirement. He stepped away from competing, but the seven-time 212 Olympia winner doesn’t plan on slowing down with podcasts, training sessions, and other exciting endeavors.