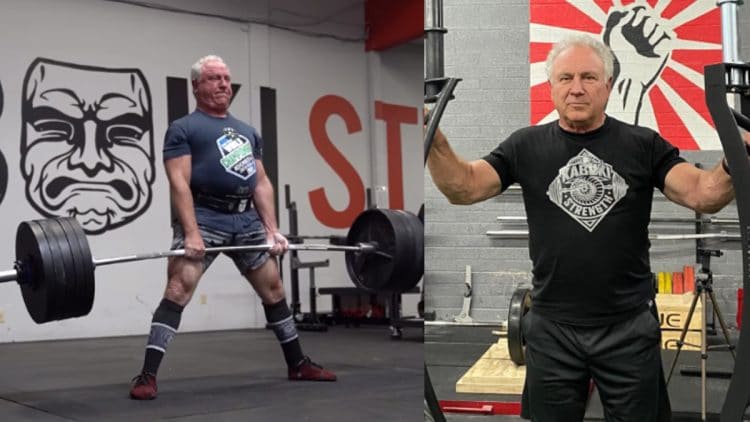 Rudy Kadlub is an extremely successful powerlifter, but he is also known for his sensational birthday traditions. Rudy absolutely lives for powerlifting, as he has been doing it for almost two decades. However, he is still finding ways to improve. April 11th, 2022, marked the 73rd birthday of the world champion powerlifter Rudy Kadlub, and he celebrated it by pulling a gigantic 523 lbs (237 kg) raw deadlift. But before hitting 523 lbs, Rudy warm-up with a 228.2 kg (503 lbs) deadlift and sip a straight bourbon whiskey.

With Queen’s ‘We Are The Champions’ song resonating through the gym, Rudy positioned himself in a sumo stance and grabbed the bar with a mixed grip. Considering that Rudy was only equipped with a lifting belt, the pull looked relatively easy for him. It is also 3 lbs heavier than what he lifted for his 72nd birthday.

“A great birthday session in the Lab yesterday with a 523-pound heavy single in celebration of turning 73.”

“Here’s to another year of great lifts and great friends in training and competing!⁣ “

Taking into consideration that Rudy Kadlub is the current holder of the U110 Masters 70-74 Deadlift World Record of 518 lbs (235 kg), so his birthday lift can be considered an Unofficial World Record.

Rudy Kadlub will have the chance to remake this lift and further improve his World Record very soon. He plans to compete at the 2022 USPA Drug Tested National Championships, which will take place from May 27-31, in Atalanta, Georgia.

“Looking forward to hitting the platform in Atlanta to really show what we’ve built during this prep.⁣”

Despite coming into the sport of powerlifting at the age of 57-years-old, Rudy Kadlub has found incredible success. His first sanctioned powerlifting competition came in 2006, and he has taken part in a total of 37 contests by now. Rudy has only failed to win 6 of the meets in which he competed, and is currently on a 22-win streak. The last competition in which Rudy took part was the 2021 USPA Drug Tested National Championships, where he squatted 429.9 lbs (w/wraps), bench pressed 308 lbs (raw), and deadlifted 501 lbs (raw).

Rudy Kadlub is also a CEO and Co-Owner of Kabuki Strength, which is one of the world’s leading brands in the production of powerlifting and gym equipment.

Rudy Kadlub seems to be living his best life currently, as he is lifting some massive weight and aiming for new World Records. At 73-years-old, Rudy shows no signs of slowing down, so we can expect him to continue improving and deadlift even more for his 74th birthday.