Agnes Rudin is currently one of the greatest Junior powerlifters in the world. 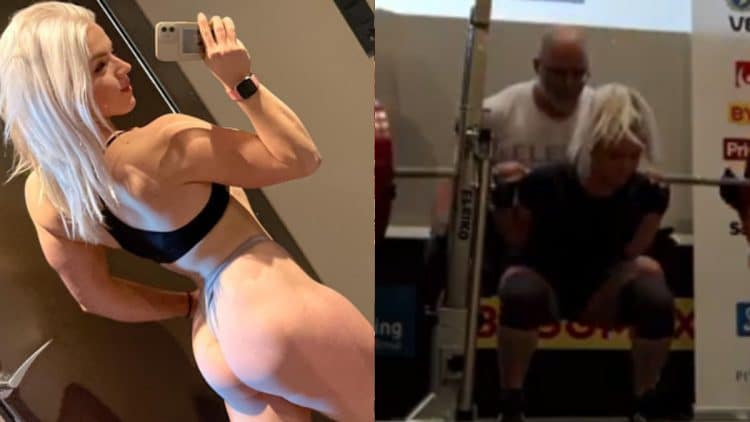 The 2021 IPF Junior World Champion Agnes Rudin has impressed everyone at the 2022 SSF Swedish Nationals. The competition took place on March 24-27, in Piteå, Sweden. Agnes competed in the 69 kg weight class and won the competition with a 30 kg (66.1 lbs) total difference from the second-place finisher. In addition, Agnes broke the Swedish National Records in the squat, bench press, and total events. Her lifts in those three events were also heavier than the current IPF Junior World Records.

Agnes squatted 181 kg (399 lbs), which is 0.5 kg (1.1 lbs) heavier than the current raw IPF Junior Record. Agnes holds this record, as she set it at the 2021 IPF World Classic Powerlifting Championships. This squat opened the competition nicely for her and paved the way for other records.

Agnes Rudin’s greatest lift from the 2022 SSF Swedish Nationals was the bench press. She lifted 120.5 kg (265.7 lbs), which is also an Unofficial IPF Junior World Record. This is a 5 kg (11 lbs) improvement from Agnes’s previous PR, which is also the current U69 IPF Junior Record, as she lifted 115.5 kg (254.6 lbs) at the 2021 IPF World Classic Powerlifting Championships.

You can watch all her lifts here:

Agnes Rudin is only 21-years-old but is more experienced than a lot of powerlifters. Her first competition was in 2016 when she was just 15-year-old. Since then, Agnes has taken part in 23 sanctioned competitions and has won 14 of them. Agnes mostly competes in the 69 kg weight class. Her most notable wins came in the 2018 Nordic Championships and the 2021 IPF World Classic Powerlifting Championships. Agnes also placed second in the 2021 EPF European Classic Powerlifting Championships.

Agnes Rudin will have a chance to defend her title at the 2022 IPF World Classic Powerlifting Championships, which will take place from June 6-12, 2022, in Sun City, South Africa.