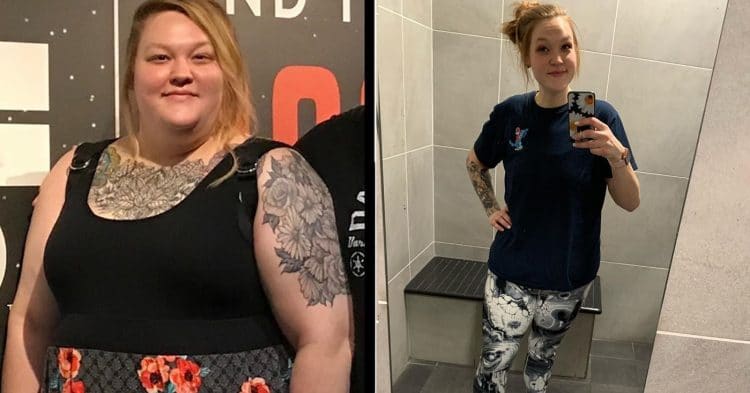 When it comes to losing weight, the process is rather straightforward. Eat less food and throw in some physical activity. But fasting to lose weight may provide even more benefits according to research. Even though, the evidence is a bit mixed in certain areas.

Studies have shown improvements in blood sugar health, cortisol levels (stress hormone), and other markers of health as well. Although, there’s a hypothesis that the simple act of reducing calories improves several risk factors and even reverses some forms of disease such as diabetes for instance. (1)

But even not considering this hypothesis, there are experts that just don’t believe in its benefits. However, that doesn’t stop those eager to shed pounds fast to try it out for themselves.

Well, that was certainly the case for 30-year-old Amanda Piotrowski from Florence Kentucky. She ended up losing an unbelievable 195 pounds in less than two years after setting a New Year’s resolution to lose weight and get healthier.

As a result, she looks like a completely different person, and her decision no doubt turned her whole life around in an amazing way.

Related: The OMAD Approach: Is One Meal A Day an Effective Weight Loss Strategy?

The restaurant general manager went from originally 387 lbs at her heaviest to 192 lbs in less than two years. She became serious at age 27 and decided to make a change on January 2, 2018.

Here’s a before and after from 2016 to 2020 where she noted her failed attempt at weight loss the first time although she still lost some pounds. But the second tome would prove to involve her breakthrough where she’d lose 190 pounds.

She, not surprisingly, started to feel a lot better in her skin at this point.

But it wasn’t easy, she told Women’s Health.

“It was always a struggle for me to lose weight. I tried over and over again with no substantial success. I love food, and I love junk food even more. At my heaviest weight I was 387 pounds.

My weight also impacted my health. I had high blood pressure that I needed medicine for. I was also previously diagnosed with uterine cancer and was told my weight could have played a part in that as well.

Piotrowski admitted to having a love for food, especially the kind that’ll rapidly packs on the weight. She developed health problems and eventually uterine cancer, of which her weight may have contributed to.

Her determination to transform her body for health’s sake kept her going even when she wanted to throw in the towel.

“I spent last night looking through my old post on this account. From way back when I started in 2018. If there is one piece of advice I could give, it would be: Never give up. So what you fell off your food plan! So what you haven’t worked out in a while! As long as you get back to it, that’s all that matters.

I didn’t get here being perfect. I got here by never stopping. I had bad days, weeks and even months. I had a time of regain. But I kept pushing. You can believe in yourself. Even though it’s hard. And even though it doesn’t feel worth it. I promise it will be. You CAN and WILL accomplish everything and anything you want.”

Piotrowski has been maintaining her weight for 9 months since losing the 195 months which took 20 months to do. She attributed her weight loss to calorie counting and intermittent fasting/OMAD type dieting.

“I really love fasting and how it feels,” she explained. I had previously tried keto, low-carb, and other high-protein/low-fat diet variations. I believe any way of eating can work as long as you make the best choices for you, physically and mentally”

Piotrowski provided Women’s Health with what a typical OMAD meal would look like for her.

Here’s another example meal from her OMAD eating…

As far as the exercise portion went, she didn’t start being active until a month into eating healthier. Nowadays though, she might have found her new love in physical fitness as she works out 5-6 days per week. She even transitioned into weight training after initially focusing on calorie-burning cardio sessions.

“I love just getting lost in my thoughts and crushing it in the gym.”

Losing weight and getting fit is not easy because if it was then everyone would do it. But Piotrowski does believe that everyone can do it…

She ended with some words for inspiration…

“If I get stuck, I try something else. But I never give up. I never stop trying. I cried too many times hating my body and not being grateful, and that was exhausting. This is the only body we have, so we have to take care of it.”

Amanda Piotrowski’s life has changed dramatically since setting her big goal that may have seemed out of reach at times. But she learned about the process, never gave up, and forgave herself for not being perfect. She actually feels happy and so much better… “I feel clear-headed. I feel more energetic“.