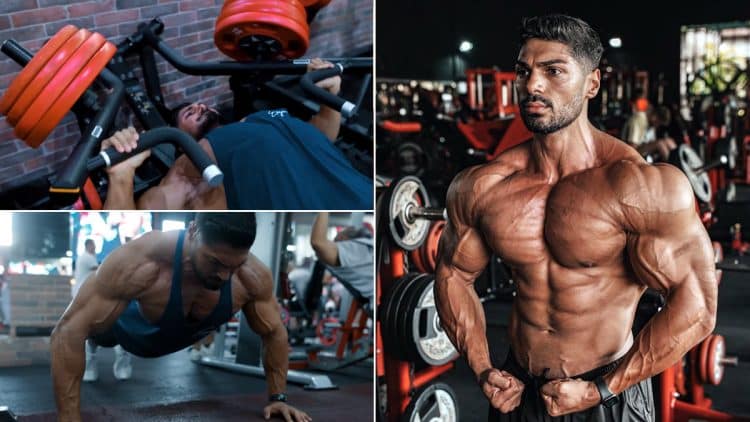 Andrei Deiu is yet to earn a qualification for the 2022 Olympia. He shifted the training camp to the USA recently and as a part of his training routine, Andrei crushed a chest workout in the gym. The video of this session has been uploaded to his YouTube channel. So without further delay, let’s look at the details of this training.

Andrei Deiu stated that his circadian cycle is not adjusted to the USA yet. However, he attributed the lack of sleep to the potential anxiety of getting closer to the show and other factors like being away from the family and running a business.

The 28-year-old is making sure to get feedback from his coach Hany Rambod and get in shape for the show to earn a direct qualification to the 2022 Olympia.

Deiu warmed up with some stretching exercises and explained the importance of stretching in his training routine.

“I feel like going into the press movement… if the joints are not warmed up properly, you’re more likely to get injured and I don’t want to get injured. On top of that, when when warm up properly, it’s more blood flow into the muscle and you’re ready…”

Andrei Deiu started the chest workout with Pec Dec Flyes. According to an ACE-sponsored study, Pec Deck Flyes are the second most effective exercise to activate the pectoral muscles after the barbell bench press. Therefore, it can be an extremely valuable addition to the chest routine for most people. After performing the working sets of this exercise, Dieu jumped into the next movement.

The 28-year-old next took to the incline bench press on a plate-loaded machine to work the upper chest.

“We are trying to focus on the upper chest. Trying to hit that top shelf…!”

After doing the first set with one full plate on each side, Deiu added quarter plates for the second set. While many people think the increase in weight is too insignificant to make a meaningful difference, an advanced-level athlete like Deiu knows the importance of taking tiny steps. He said:

After doing all the sets with incrementally heavy loads, he took to the next exercise.

Deiu took to another pressing movement next and did three to four heavy working sets of flat bench presses on a plate-loaded machine.

Deiu shifted to free weights and bodyweight movements to work the chest further. He did Dumbbell flat bench press with hammer grip and superset it with standard bodyweight push-ups. After performing all the sets in rapid succession with minimal rest periods, the Olympia hopeful took to the last exercise of the day.

This is an isolation movement that ranks in the top three in terms of chest muscle activation after bench press and pec deck flyes. Andrei Deiu performed three to four working sets of this movement and wrapped up the training session with a massive pump in the chest.

Andrei Deiu is training hard and smart under the guidance of renowned bodybuilding coach Hany Rambod. He acknowledges, however, that his midsection requires additional attention to be as impressive as the remainder of his physique.

If Andrei Deiu maintains his focus on training and is able to qualify for the 2022 Olympia, he can pose a formidable challenge to every competitor competing for the title of Olympian in Men’s Physique.

How To Do Bird Dog Rows – Muscles Worked, Benefits, and Alternatives