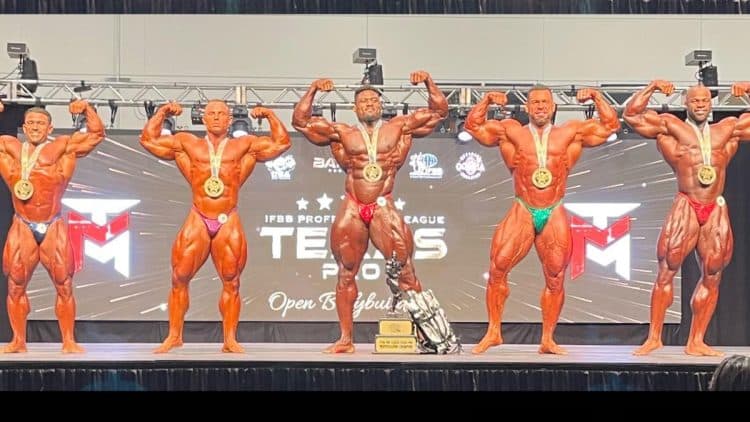 The 2022 Texas Pro took place on August 12-13, 2022, in Irving, Texas. Eight bodybuilding divisions were featured at this show. Competitors from 212 Bodybuilding, Classic Physique, Men’s Open, Men’s Physique, Bikini, Figure, Women’s Physique and Wellness took to the stage looking to earn the invitation to compete at Mr. Olympia in December.

The 2022 season of bodybuilding is underway with athletes gathering from around the world, presenting their physiques, in hopes of securing a coveted invitation to the Olympia contest this winter. This year’s 2022 Olympia will take place from Dec. 15th – 18th in Las Vegas, Nevada.

The qualification period for the biggest IFBB Pro League show of the year began September 13, 2021, and runs until November 20, 2022.

Find a full list of winners and the results from the Texas Pro 2022 bodybuilding show below:

Heading into the weekend, anticipation surrounded Andrew Jacked‘s pro debut. He has trained and posed with bodybuilding legend Flex Wheeler in preparation for his current season. Earlier this year, Jacked earned his pro card at the 2022 Arnold Classic Amateur. His aesthetics and symmetry are some of his best weapons on stage.

Martin Fitzwater had an impressive season last year, starting with a fourth place finish at the 2021 Texas Pro. After that, he finished fifth at the 2021 Legion Sports fest Pro. Trained by veteran bodybuilder Branch Warren, Fitzwater brought a round and full package to the stage in Texas. After the judges put the participating athletes through a series of comparisons, Andrew Jacked walked away victorious and earned his invitation to compete at 2022 Mr. Olympia later this year.

Cody Drobot made a big impression on fans after earning fourth place in the 212 division at the 2022 Tampa Pro. His conditioning, slim waist, and striated chest made him a dangerous opponent.

Another competitor this weekend was Kerrith Bajjo, who had an impactful season in the IFBB Pro League last year. He started the season placing third at the 2021 Chicago Pro. After making some adjustments to his overall package, he earned gold at the Tampa Pro roughly a month later. Bajjo competed at 2021 Mr. Olympia and finished the contest in eighth place.
Before making his way to the Texas Pro this year, Kerrith performed at the 2022 Tampa Pro, where the 212 competitor took runner-up to Keone Pearson. After a close contest, Bajjo claimed the 212 bodybuilding title at the 2022 Texas Pro and earned his invitation to compete at Olympia later this year.

Courage Opara is a tier one Classic Physique competitor. He earned fourth place at the 2021 Arnold Classic last year. Then he brought his physique to the Olympia stage that same year, where he finished the show in 15th, respectively. Despite the setbacks, Opara proved to be among the elite after earning victory at the 2022 Tampa Pro last week.

Valentin Petrov entered the Texas Pro with a lot of momentum courtesy of an active season this year. He earned second place at the 2022 NPC Worldwide Balkan Grand Prix and first place in the same contest but in the Masters Over 40 category. He recently finished in third at the Tampa Pro and showcased impressive improvements to his physique. After a heated battle on stage, Courage Opara won his second show in a row and is your 2022 Classic Physique Texas Pro champion.

Anticipation for the biggest show of the year continues to build. Fitness Volt would like to congratulate all of the winners on their major victories at the 2022 Texas Pro!