Andrew Jacked is confident his time training with Flex Wheeler will amount to significant improvement. 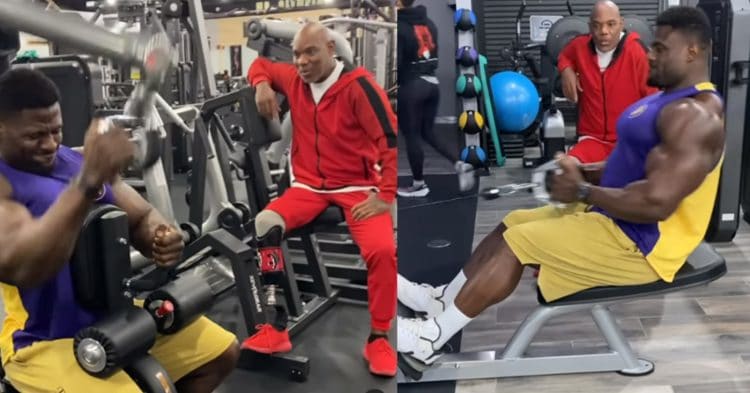 Flex Wheeler is a staple fixture in the bodybuilding community. The consummate professional was a foreboding force in competition even in his twilight years. With numerous accolades attached to his name, Wheeler has long been an important figure in the sport. While the bodybuilding legend has gotten a bit older, that hasn’t stopped him from helping the rising upstart Andrew Jacked on preparation inside the training room.

Similar to Flex Wheeler in his heyday, Andrew Jacked has a natural physique that few men can match in a bodybuilding competition. Jacked recently took part in the Emirates Bodybuilding Federation where he was able to win the inaugural event in his division. With excellent muscle mass and symmetrical abs, there is little doubt among fans and pundits that Jacked will make a huge splash in the coming months. Andrew has a huge potential to make some noise at the IFBB Pro league but before that, he has to earn the status.

With the intention of reaching the highest peaks the sport has to offer, Andrew Jacked met with Flex Wheeler, and the two trained together in Las Vegas, NV. Without a doubt if Jacked continues learning new techniques from a legend like Wheeler, his bodybuilding potential will continue to snowball.

“Back to School! My body has gotten used to my kinda routines and techniques and had very limited growth factor. Learning a new training technique, form & routine will definitely help me go past that. Teaming up with The @officialflexwheeler in Vegas day No:2 . So far has been going so well even tho I suck at the kinda weights I’m handling it’s all for the process to kick in and Slowly but Surely we will Progress Positively. Yesszzziirrr!!! @officialflexwheeler @teamflexwheeler @jasim_alali33 #positivity #only #workinprogress #slowlybutsurely #godsplan” Andrew Jacked posted.

With the help of Wheeler, the sky is the limit for a young prospect like Andrew Jacked. The pair continues their onslaught in the practice room. As Wheeler assists Jacked in preparation, it appears the blue-chip prospect will be a handful for any competitor standing across from him on stage.

The 12 Best Cable Machine Exercises for Bigger Biceps and Workout