American-British personality and former kickboxer Andrew Tate is drawing backlash after accusing all bodybuilders of being 'p***y cowards' afraid to fight in combat sports. 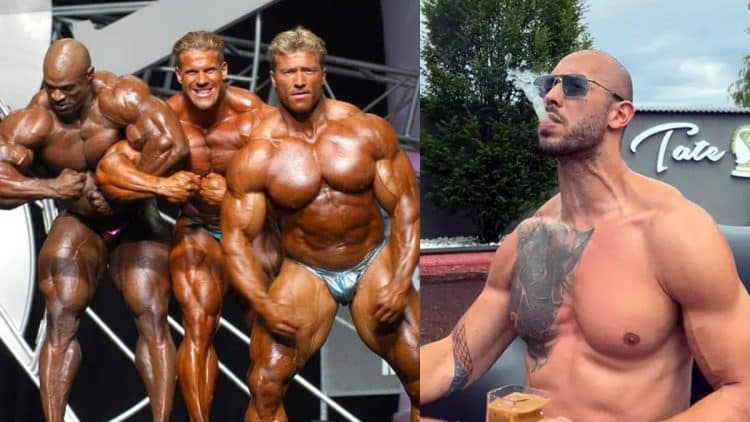 Former kickboxer Andrew Tate recently voiced that all bodybuilders are ‘p***y cowards’ afraid of combat sports, which has prompted influencers Kenny KO and Greg Doucette to fire back. According to KO and Doucette, bodybuilding can further fitness goals despite Tate stereotyping athletes in the sport.

Following his kickboxing career, Andrew Tate transitioned into the fitness influencer market. He began to offer paid memberships and courses through his website. Despite reaching new levels of fame this year, Tate was subsequently banned from Twitter, Facebook, Instagram, YouTube, and TikTok for alleged misogynistic commentary.

Like Tate, Kenny KO also rose to prominence as a fitness influencer in the past few years. KO is known for calling people out, especially when discussing the ‘natty or not’ debate. The last time we saw Kenny in action, he was grilling 53-year-old Mike O’Hearn about whether or not he uses steroids.

IFBB Pro Greg Doucette has bodybuilding experience in addition to his work as a fitness influencer. Greg is a certified bodybuilding judge and understands the ins and out of the sport — especially when controversy rears its head. Given Andrew Tate’s inflammatory remarks about the sport, both KO and Greg recently gave their thoughts on the touchy topic.

Andrew Tate Calls out Bodybuilders: “They Don’t Have the Balls to Be a Fighter”

Below you can find a full statement from Andrew Tate regarding his view of bodybuilders.

Bodybuilders are obviously afraid of fighting, but they’ve decided to put all their time and effort and energy in the gym because to try to make sure no one ever starts to fight them because they are absolute p***ys,” Andrew Tate said.

Kenny KO Responds: ‘There’s an Element of This That’s True’

After listening to what Tate had to say, KO asserted that there are a number of reasons why someone might get into bodybuilding, like fitness, health, and to look intimidating.

“I think most people get into bodybuilding or fitness for a couple main reasons right. One is for your health, overall improvement. I think most bodybuilders probably don’t do this but the majority of people in the fitness scene or in fitness are going for losing fat and improving the overall quality of life,” Kenny KO said.

Kenny KO added that men get into bodybuilding to attract more women, even though that’s not usually what ends up happening.

In KO’s opinion, Andrew Tate is stereotyping bodybuilders by lumping them all into one category or niche.

“I don’t think this Andrew Tate clip lumps everyone into one category, one niche, one call-out because I do believe there’s an element of this that’s true. There is those guys out there in the gym, they’re trying to put on size and look intimidating,” Kenny KO said. “Do I think that’s all bodybuilders? No. Not by any means.”

Check out Kenny KO’s video below:

“I don’t understand this guy. Why does this guy continually need to call out and put down bodybuilders. What have we ever done to him? Last video was bodybuilders are losers, p***s, and cowards. They apparently all want to fight. Now, bodybuilders — they’re gay. And so not only is it gay, it’s super gay. And why? Because it’s a beauty pageant. How is that gay?”

While Doucette conceded that bodybuilders often complain about being hungry, he doesn’t believe the sport is ‘gay’ even though Tate claimed as much.

“Aside from saying that bodybuilders all cry about being hungry, which is a valid point, many of them do — not all. But aside from that, it’s a competition where dudes put on muscle so that other dudes can say that they are the best looking,” Greg said.

Greg added that just because male judges are judging other men, doesn’t mean the sport is gay. During Greg’s time as a bodybuilding judge, he said oftentimes, he’s sitting next to female judges as well.

You can respect the work and dedication that was put into achieving a physique. One that you admire, one that you think looks amazing, and still have no sexual desire or wanting to have sexy time with that individual. You can simply say, ‘you look good. I wished I looked like that. I would also like to have a physique like the one you possess.'”

Doucette denies Tate’s claim that bodybuilders are judged by other men based on their appearance from the ‘neck up.’

“In bodybuilding, we’re not judging from the neck up. I know this because I’m a certified bodybuilding judge. I have judged plenty of competitions and not only that — when I competed in the past, almost every single show I’ve ever done, there’s been female judges on the panel.”

In summation, KO believes Tate grouped all bodybuilders together even though many people start the sport to improve their health. Greg Doucette, on the other hand, believes many of Tate’s assertions are misguided or just plain incorrect.

Given the differences in Greg and Kenny’s responses, it’s clear Andrew Tate has gotten the attention of the fitness community despite being banned from numerous platforms.