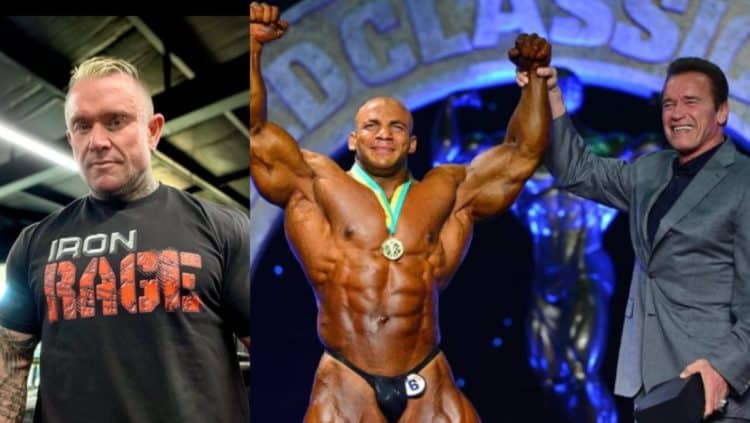 Veteran Lee Priest understands the finer details present in a sport as competitive as bodybuilding. In a recent video, Priest discussed Arnold Schwarzenegger using steroids, how gear use has changed, and why he believes Big Ramy will win 2022 Mr. Olympia this December.

“If he comes at his best, he’s winning the show, simple,” says Lee Priest, while discussing the 2022 Mr. Olympia lineup.

Bodybuilder Lee Priest led a successful career with sharp conditioning and some of the best biceps in the league. His tenure, which lasted over 20 years, saw him win a number of bodybuilding shows as well as compete on the prestigious Mr. Olympia stage several times. Priest shared the stage with bodybuilding legends like eight-time Mr. Olympia Ronnie Coleman, Flex Wheeler, Shawn Ray, and many more.

Despite hanging up his posing trunks, Priest is an open book when it comes to the sport. Whether it’s a funny story or details about bodybuilding cycles, Lee doesn’t miss an opportunity to share his experiences with fans and followers. In fact, the Australian native revealed his own career cycles recently, which he described as ‘small.’

“It’s funny. Even Arnold [Schwarzenegger] sort of spoke once about it back when he used to have his old car back in the day. He had have like a jar of dbol, and I’d say, ‘how many you take?’ He’s like, ‘I just put my hand in — might grab three, might grab four. There was never any sort of set rule, like I need to take this much or that much,” Lee Priest shared.

Lee believes the younger generation is hung up on taking excessive amounts of gear but said most professionals find success with just a few compounds. He added that even the late Bostin Loyd eventually learned this lesson.

“These young kids, you look at their profile pictures. Oh my God, it looks like there going for chemo and monkey pox,” Lee Priest said. “They think there’s some secret that every pro knows, but we don’t want to tell them just in case they get as big as us.”

“I don’t get this more is better and sadly, Bostin [Loyd] when he finally learned he didn’t need that much and Fouad [Abiad] who took these large amounts. You listen to them later on and the majority of them said they look best when they are on less, but these young kids don’t want to listen.”

In Priest’s opinion, people taking cycles for the first time should stick to Deca for eight weeks and then reassess the protocol after seeing how each compound affects the body.

“For your first cycle, it should be maybe just Deca for eight weeks. Come off a couple of months, then do test for some long. That way, you know how each drug by itself affects your body. So, when you do combine them, you know what’s working.”

As it stands, Priest thinks Big Ramy is being forgotten about, given the resounding pro debut of Andrew Jacked and the momentum of Nick Walker.

“Well, it’s funny though, when you think about the talk of the Olympia, just like from different shows and on the internet. Ramy is talked about very little. It’s almost like Nick Walker, Andrew Jacked coming in, this person, that person. It’s almost like people are forgetting Ramy all of a sudden. I think he’s just going to come in and people are going to go, ‘oh shit.'”

Priest said that if Ramy comes in at his best, he wins the show without a doubt. Ramy is working with Ronnie Coleman’s former coach, Chad Nicholls. Priest contends that if Ramy shows up like “The King” did in 1998 — he will be unbeatable.

“Some guys who will look good compared to him, conditioning wise but size-wise, they are not going to get him. Even Nick Walker is big and freaky, but Ramy… if he comes in shredded, it will be like when [Ronnie] Coleman walked out in 98. It was like, ‘okay there’s the winner.’ Everybody is going to look good but it’s going to be the Ramy show — him and everybody else.”

“I think you know; Chad is working with him still. If he can bring in that 98 conditioning that Coleman did with that size,” Priest shared. “I think that’s what it is. Ramy has been hit and miss before. Last time, he got it. He got it again with the size and the conditioning, but I think if he comes in this time with the conditioning and the size and wins it, that kind of solidifies him.”

Despite the hype surrounding 2021 Arnold Classic champion Nick Walker, Priest doesn’t believe he will have ‘enough’ on stage to topple Ramy.

Another wild card that could prove problematic for Ramy is the newly signed NPC bodybuilder Michal Krizo. The Slovakian native has the sheer mass and firepower to stand with Ramy, though he has yet to earn his pro card. He recently announced that his plan is to earn it at the 2022 Amateur Olympia Italy contest scheduled for next month.

Despite the growing lineup expected to wage war at Olympia this year, Priest believes this is Ramy’s show to lose. After discussing the Open landscape, Priest says the only way Ramy could lose this year is if someone brings in a truly ‘spectacular’ package.