Although it is a surprising fact, this was Maxime Boudreault’s first time winning the Canada’s Strongest Man contest. 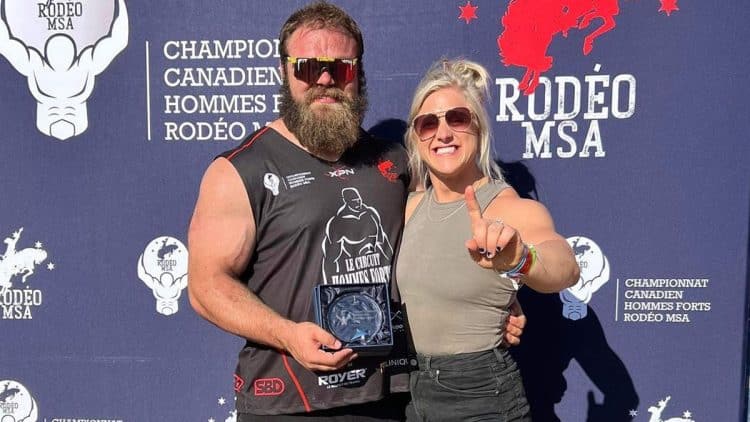 The 2022 Canada’s Strongest Man contest took place from August 25-27, in Sainte-Anne-de-Beaupré, Canada. It gathered almost all of the country’s greatest strongmen, with the exception of Mitchell Hooper, who has been on an incredible streak this year. However, the 12 athletes who did compete managed to put on an incredible show throughout all ten events of the competition.

Maxime Boudreault claimed his first National title, despite being amongst the greatest in the world for some time now. Last year’s champion, Gabriel Rhéaume, barely got the silver medal this year, while Wesley Derwinsky got third with a couple of world class performances.

The 2022 Canada’s Strongest Man was opened up with the Squat Lift event, where athletes had to perform as many reps as possible with 311 kilograms (685.5 pounds). Kelly Branton had the perfect start, having done 11 repetitions, which everyone else failed to do. Simon Pratte was the only other person to hit double digits.

During the Dumbbell Medley event, the athletes continued to battle it out. Five dumbbells ranging from 78 kilograms (172 pounds) to 124 kilograms (273.5 pounds) were placed on the floor, and athletes raced to pick them up as quickly as possible. Although no one completed all the dumbbells , Simon Pratte and Maxime Boudreault proved to be the fastest to do four of them.

Although they traditionally wrap up Strongman contests, the Atlas Stones were the third event of the 2022 Canada’s Strongest Man. As always, five implements were used, and they weighed from 141 kilograms (311 pounds) to 191 kilograms (421 pounds). Maxime Boudreault is one of the greatest Atlas Stones lifters in the world, so this was a very an easy victory for him. In fact, no one apart from him managed to lift all five stones.

Historically, the deadlift has been one of the greatest tests of strength. In order to keep things simple, the organizers decided to go with a deadlift for max. A four-way tie ensued, as no one was able to pull more than 379 kilograms (835.5 pounds).

The Log Lift is almost always included in any Strongman competition, as it is one of the best tests of shoulder strength. Maxime Boudreault added another event win to his name, since he was the only one to overhead press a 188-kilogram (414.5-pound) log. Wesley Derwinsky and Gabriel Rheaume closely followed with a 7-kilogram (15.5-pound) lighter log.

The deadlift made another appearance at the 2022 Canada’s Strongest Man contest, but this time its goal was to test the grip strength. So, the competitors held a 318-kilogram (701-pound) deadlift for as long as possible. The result could have gone in anyone’s favor, as the final times turned out to be extremely close. However, Joey Lavallée beat Simon Pratte by 0.39 seconds to claim max points.

The seventh event was something that is tightly-connected to Strongman, but also not seen too often in competitions. An old-school exercise, the Back Lift involves ducking under the contraption to get in a position where the athletes’ back is almost parallel to the ground. From that position, he then tries to lift the weight from the ground. Tyler Sigurdson came out as an unexpected winner with an absolutely massive lift.

Coming into the final few events every point started to matter and the Bag Over Bar was the perfect way to find out who deserved it the most. The bag sequence consisted of eight implements ranging from 20 kilograms (44 pounds) to 32 kilograms (70.5 pounds). The organizers set the bar at the height of 4.57 meters, while the competitors had 75 seconds to complete the event. Wesley Derwinsky and Maxime Boudreault were the only ones to successfully throw all eight implements, but Wesley was significantly faster in doing so.

The Super Yoke was the second-to-last event of the 2022 Canada’s Strongest Man. The Yoke weighed 408 kilograms (899.5 pounds) and the track length was 23 meters. Gabriel Rhéaume displayed incredible swiftness to win the event. Wesley Derwinsky followed up his Bag Over Bar win with a second-place finish in this event.

The Loading Race was what wrapped up the 2022 Canada’s Strongest Man contest and definitely made it interesting because of its unpredictability. The race only consisted of three implements, which were the 122-kilogram (267-pound) keg, 150-kilogram (330.5-pound) shield, and a 159-kilogram (350.5-pound) sack. Maxime took the maximum points and put a stamp on his overall victory.

Historically, Canada has been one of the most prominent nations when it comes to Strongman. It seems that they are now blessed with more talented athletes than they have ever had in the past. Because anything could change in the leadup to the finals, it made the 2022 Canada’s Strongest Man contest so interesting. Not only did this competition justify its reputation, but it also exceeded expectations.