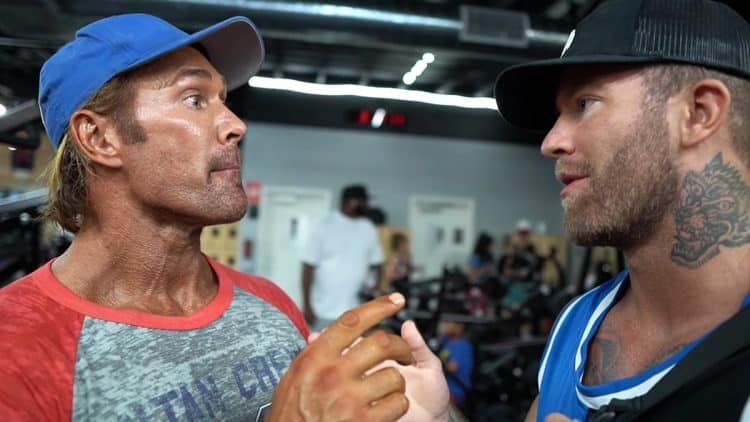 If anyone is drinking from the fountain of youth, certainly Mike O’Hearn is one of the leading candidates. In a recent video, O’Hearn defended his claim of being natural while speaking with fitness influencer Kenny KO.

Mike O’Hearn sports a big and shredded physique at 53 years old. Some of his best attributes are his size and aesthetics, which he’s managed to maintain his entire life not just during his bodybuilding career. These qualities helped him venture into other sporting and entertainment industries too. From modeling, bodybuilding, powerlifting, strongman, and acting, O’Hearn has done it all. As a bodybuilder, he managed to win the Mr. Universe title four times during his heyday.

Even while training strongman, O’Hearn proved himself alongside an elite crop of competitors. He has trained with four-time World’s Strongest Man Brian Shaw. The two recently performed a series of exercises designed to build bigger and more full chests.

In addition to his success in bodybuilding and strength sports, O’Hearn made waves quickly as an actor. From 1989-1996, O’Hearn played the roles of Thor and Titan on the hit TV series American Gladiators. O’Hearn returned in 2008 for the revival of the popular show.

Despite getting a little older, O’Hearn is committed to staying in shape year-round. The popular bodybuilder routinely shares his workouts on social media. O’Hearn showed off his seemingly timeless strength recently with a close grip bench press of 385-pounds for ten reps in the company of NFL analyst Heath Evans.

Given his ripped physique over the years, many people, including fitness influencer Kenny KO, are raising questions about whether or not Mike has an all-natural physique. These concerns prompted the Washington native to discuss the matter in further detail.

In an interview with fitness influencer Kenny KO, Mike O’Hearn explained how he is able to maintain such a ripped physique despite being over the age of 50.

“What would be the point though?” O’Hearn said.

O’Hearn expressed doubt about testosterone decreasing as males get older, but Kenny KO told him that it’s a scientific fact.

In response, O’Hearn retorted with his own question.

After saying he doesn’t use TRT, O’Hearn explained that most men, especially bodybuilders, reach their physical peak in terms of strength around the late 30s or early 40s.

Kenny KO gave an in-depth explanation to O’Hearn’s question, highlighting his efforts as an athlete throughout his life.

“Alright, so let’s first start with, I have never trained powerlifting. I’ve never had a coach or anyone teach me the fundamentals or the technique to lifting more weight. My background was always football, sports performance, decreasing my 40 [yard dash] time, able to run faster. I never really had a want or desire to push more weight.” Kenny said, speaking over his recorded video with O’Hearn.

O’Hearn on Being Natural During Bodybuilding Career: ‘Everything That I Was Doing Was Drug Tested’

In the next segment of the video, O’Hearn was asked if he was natural in his teens and throughout his bodybuilding career.

“How could I compete throughout my entire career doing drug tests, TV shows. Everything that I was doing was drug tested and never… Mr. Universe, Mr. America, Mr. USA, California two times. O’Hearn said. “So, all those shows, over two decades of drug tests, and at no point, even when I was going through puberty were you stronger than me.” O’Hearn stated.

While the conversation seemed contentious at times, O’Hearn told Kenny that he had an appreciation for what he was doing.

“So, the point is, you guys shut down their opportunity. All seriousness aside. I love what you’re doing. Do not stop doing what you’re doing but you stop… every kid out there going ‘maybe you do’. I love that I was around such savage individuals.”

Kenny KO is adamant that everyone should push their physique as far as possible while remaining natural.

“I do think everyone should push their physique as far as they can naturally. I say, if you don’t have a career in bodybuilding, why take stuff? Why be detrimental to your health?” Kenny shared.

According to O’Hearn, there are too many factors at play when trying to determine if someone has a natural physique or not. He pointed at a ripped 45-year-old woman at his gym who just had a baby but is in better shape than Kenny KO. O’Hearn says there are many ‘possibilities,’ yet ‘social media guys’ always simplify the matter to ‘drugs or no drugs.’

“Here’s one big thing you never see. I’m around the most elite athletes and I have been since I was a teenager, in the world. And the most elite athletes, there are better guys walking around the world, that don’t train, that look better than you. There’s a 45-year-old lady that had a kid, that looks better than you. You train. You’re a male. My point is, there’s such a level of possibilities and social media guys shut that shit down and go ‘No. No. It’s either drugs or no drugs.’ There’s a Mr. Olympia walking around that doesn’t even train and looks better than all of us and eats donuts.” Mike O’Hearn said.

While genetics evidently play a role in someone’s ability to stay shredded as they get older, O’Hearn says it’s possible to stay ‘healthy and strong’ for a lifetime by training hard and never ‘fuc**ng stopping.’

“You can be healthy for a lifetime. You can be strong for a lifetime. You can do things if you start young. Because I don’t want anybody to go, ‘shoot, I want to look like you when I’m 60.’ It has nothing to do with what I’m doing. It has everything to do with what I did as a teenager. Then, I just did day after day after fuc**ng day. Then I did it a day again, and then I never fuc**ng stopped.”

After speaking about the sacrifices necessary to maintain his physique, O’Hearn emphasized that his results are not a byproduct of genetics. He added that he’s had low testosterone for his entire life.

Kenny KO interjected by saying O’Hearn has exceptional genetics when it comes to maintaining a ripped physique. O’Hearn responded by dismissing the notion, however.

“I’ll never accept it. I’ll never be the guy that says I have genetics.” O’Hearn said. The great thing about it, is we’re here today. I was invited here. You and me finally get a hookup and hang out, which I love. Again, do not take this any other way except us talking, because I love his [Kenny’s] stuff.” O’Hearn shared.

Bodybuilding legend and four-time Mr. Olympia Jay Cutler recently touched on the hush-hush nature surrounding Mike O’Hearn and The Rock’s alleged use of steroids. While he admits he’s an open book when it comes to discussing past prep cycles, Cutler says that ‘if they choose to not talk about it’, then he respects that.

While candid, fitness influencer Kenny KO’s conversation with O’Hearn lacked concrete evidence suggesting that that the bodybuilder uses steroids. At 53 years old, O’Hearn believes his longevity and strength come from consistency, not from illicit substances.