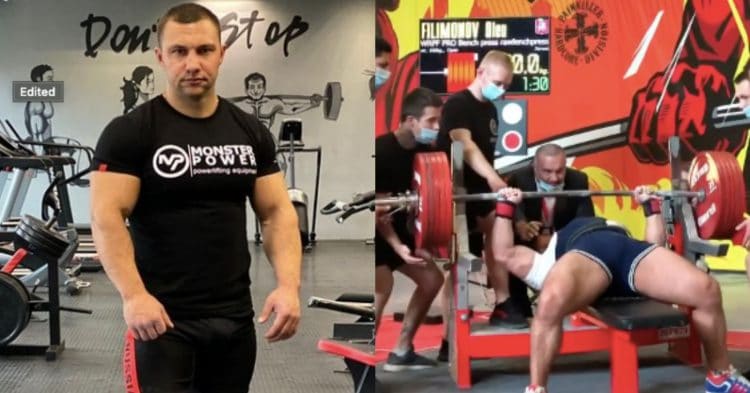 The World Raw Powerlifting World Cup went down in Moscow, Russia, on December 20th, and saw some insane performances. Not least of which, was Andrey Sapozhonkov, who scored a new world record at the contest.

Over the years, 33-year old Sapozhonkov has proven himself to have some serious skills on the weights, most notably with the bench press. The Russian athlete has never competed outside of his home country, but for the last decade he has been putting together some insane performances that have led him to championships and world records. This year he has been amping things up too, hitting the training room in a big way to prepare for the next chapter of his already impressive career.

The next step towards that came recently, at the WRPF World Powerlifting Championships. We already saw one powerlifter set world records at this meet, but Andrey Sapozhonkov had his own record setting performance in mind. The powerlifter competed in the 90kg weight class, and managed to hit an insane 277kg (610.6lb) bench press, which he uploaded to Instagram. As impressive as it was to see him bench over three times his bodyweight, it became more incredible when you realize that this was a new world record for the weight class.

This was an insane performance from Sapozhonkov. He absolutely demolished that weight in a way that would never make you think it was a world record. Nevertheless he has scored this, and etched his name in the history books yet again. He had been working towards this moment for a while, so it must have been a relief to hit this type of massive accomplishment.

Not only did Sapozhonkov score himself a new world record with this performance, but he also went on to win the 90kg division. On top of that, he came first overall in the meet. So all in all, this was a strong showing from a powerlifter who seems to only deliver as much. He was incredibly proud of doing as well as he did, which he should be.

Between the performance of Andrey Sapozhonkov and the other skilled competitors who took part in this event, there was a lot to be impressed by. That being said, you would be hard pressed to find anyone who looked quite as good as he did, even with other world records being set at the same time. Congratulations are in order for this hard working powerlifter.