Arriving home after winning the 2020 Mr. Olympia, Big Ramy was swarmed with fans at the airport who were happy that he won 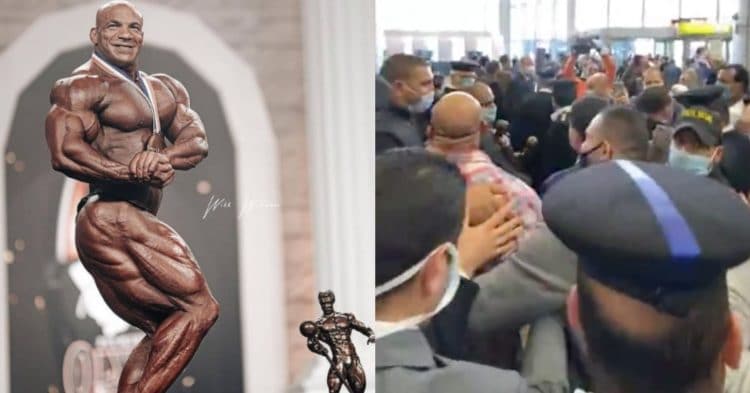 The 2020 Mr. Olympia went down December 17-20th in Orlando, Florida, and saw Egyptian bodybuilder Big Ramy walk away as champion. Upon arriving back home, the new Mr. O got to see firsthand just how much support he has from his fans.

Heading into this year’s Olympia, it was already known that Ramy was a beloved and popular bodybuilder. He comes from Egypt, where bodybuilding is one of the biggest sports, and he was always extremely gifted as an athlete. It was this year’s Olympia that he fully realized his potential though, looking better than he ever had in order to win the show and become the 16th man to hold the distinction.

Now obviously Big Ramy was quite proud of this accomplishment, and was happy to have been able to win the contest. However this was nothing compared to the way his fans back home felt, and that was made clear from the moment he got off the plane and arrived back in Egypt. Posting to his Instagram, the bodybuilder can be seen trying to wade through a swarm of fans and media who were there to see him arrive. It was a crazy sight to behold, and one that clearly displayed the extent with which people like him.

Judging by the fan reaction of Ramy arriving in Egypt, it is evident that he is a superstar, at least in his homeland. Fans were crowding around him, trying to meet him and touch him, to the point where he was locked in a tight bubble of security just so he could made it through. It was an insane and hectic scene to witness, and it was likely even crazier in person.

That being said, the celebration for Ramy actually started before he left the United States. When he arrived at the airport to take his Egypt Air flight back home, there were a few celebratory balloons set up to surprise him with. You can see “Congratulations Big Ramy” plastered in a few places in the airport, and this was while he was still in the U.S.

It is crazy to see the fanfare that has gone alongside Big Ramy winning the 2020 Mr. Olympia. It is clear to see that he is a very popular athlete, and having him as a champion will certainly do a lot to boost the sport. He seems like the right man to be an ambassador, and he was more than deserving of winning the show.