Life and accomplishments of Angelica Teixeira 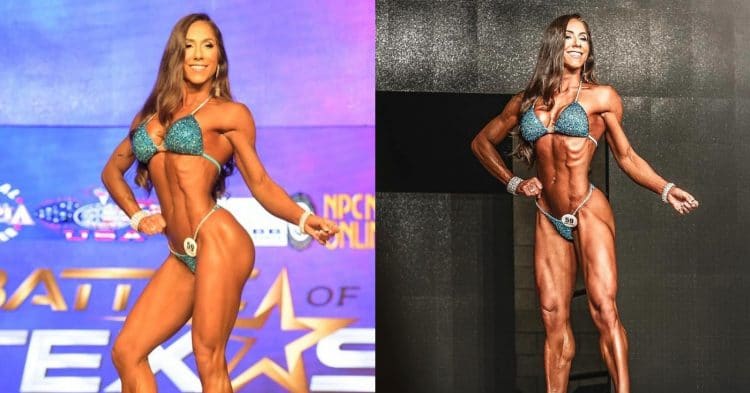 Angelica Teixeira was born in the country of Brazil.

She was fascinated at a young age with the attractive and in-shape physiques of women on TV and at the beaches in her homeland. Teixeira was very involved in Jazz dance for several years which kept her in good shape.

She was inspired to maintain and improve her appearance and at age 15, she desired to join a fitness club. Unfortunately, due to the laws of her country, she was too young at the time. So, she found ways to keep fit until she turned 18 years old and could train at a gym.

“When I was 15 I knew I had to do something related to fitness.”

Soon after, Teixeira desired to become a trainer to pursue her passion for fitness. This would require her to earn a four-year degree in physical education of which she did achieve.

She could then start her journey as a trainer and she worked for several years before moving to the United States in 2009. Teixeira lived in Texas first but eventually relocated to New Jersey where she currently resides.

But living in the US wasn’t easy, especially at first, due to the language barrier as her native language is Portuguese.

However, from working at a supermarket, watching television and communicating with English-speaking people, and asking for help, she continued to improve and can now speak it rather well.

“With zero English I had to start from the bottom. I was a bagger at the supermarket, that’s how I started learning English.”

Not to mention, she’d need to speak English well if she was going to make a living in the US as a trainer. But it’s safe to say everything turned out very well for her, becoming a trainer, elite Bikini competitor, and spokesperson for the sport.

Angelica Teixeira loved fitness so much that she decided to start competing in 2013. She noticed that many trainers competed and believed she had what it took to get on stage too.

Plus, learning the ropes of competing and gaining more knowledge on changing her body would benefit her clients as well.

Well, turns out that was one of the best decisions she could ever make in her life. She climbed the ranks rather quickly, in fact, and the sky was the limit for the young Brazilian who had faced many obstacles.

Did she ever think she’d win the biggest title in her division one day? Definitely not! Like many, she didn’t necessarily have any intentions of making competing a full-time gig.

Teixeira is most known for winning the Olympia Bikini title of which she did in 2017 and 2018. She made an amazing leap from the 2015 Olympia where she came in 31st place, all the way to second the very next year.

She also won the Bikini International competition in 2018.

Her success didn’t take as long compared to most athletes who competed for several years before winning a major title, much less the Olympia. Her third appearance at the Olympia was a charm.

Her most recent competition was the 2020 Olympia where she took 4th place and won a $7,000 check.

“Believe in your dreams and fight for it and go after it day by day.”

Here are a few of the workouts that Angelica Teixeira has shared on social media.

She does lots for glutes (her favorite body part) and it’s really paid off for her, having awesome development in this area. Not to mention, it’s a very important body part in Bikini competition.

Teixeira minimizes rest breaks between sets when she’s a few weeks out from competition.

The shoulders and abs are also very important muscle groups for a Bikini competitor.

Teixeira doesn’t too much for abs and she doesn’t use much weight either. She trains and twice per week and usually does about 2-3 exercises per session.

Here’s an example of her weekly workout routine

She does cardio after resistance training and prefers the Stairmaster, inclined walking, and HIIT (high-intensity interval training).

Below we’ve shared details from a full day of eating video that Teixeira posted on her YouTube channel during her 2019 Olympia prep.

Now, she doesn’t count her macros as much as a lot of other competitors simply because she doesn’t like to do it. However, she does have an idea and surprisingly, a lot of top-level stage competitors use this strategy as well.

She does know how many calories she eats though.

Teixeira doesn’t do the whole fasted cardio thing either because she wakes up hungry so needs to get her nutrition in before anything.

“I did once fasted cardio wasn’t working because I was always stressed.”

She also usually has breakfast with her husband.

“You need to eat because this is bodybuilding,” she explained. Some people do it wrong, they starve themselves, and their body shows. It shows you’re too depleted or you’re too shredded. You start eating the muscle when you do too much low carbs.”

Eating low to no carbs does not work for her body either and she figured this out from many years of competing. She, of course, drops her carbs a little but never too low throughout her entire prep. She also includes a lot of healthy fats and lean protein in her diet.

She works with a diet coach and believes it’s important to eat foods that you like if you’re to maintain a certain meal plan. That doesn’t mean to eat pizza and cookies, of course, but do a diet that consists of nutritious foods that you won’t dread having to eat every day.

“It’s important to really enjoy what you eat. If you try to eat something that you struggle to eat like every three hours every day, you’re not going to be able to stick to it.”

After breakfast, it’s time to train, and then she takes glutamine to avoid muscle breakdown and help with recovery.

Angelica Teixeira was fortunate to have been able to win the biggest title in Bikini competition twice, in addition to many other major contests. Of course, it wouldn’t have been possible had she not worked hard and believed in herself.

She developed a passion for fitness at a young age in Brazil and hasn’t stopped training since her teenage years. She’s a true inspiration and proof that hard work pays off!