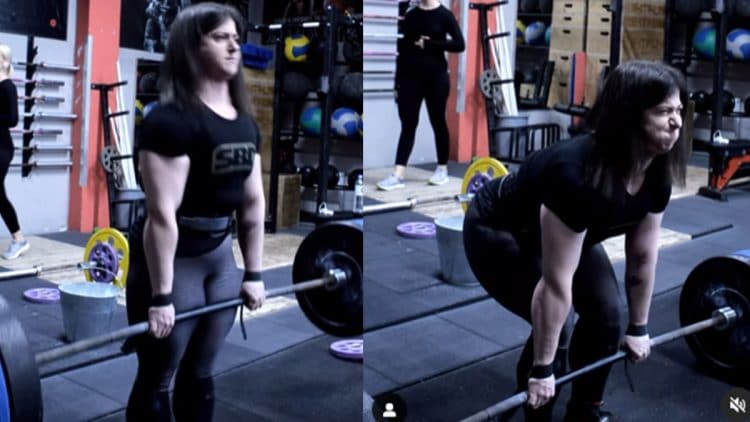 The country of Georgia is widely known for its incredible strength athletes, as the likes of Lasha Talakhadze, Levan Saginashvili, Konstantine Janashia, and more are representing it. In spite of this, one woman is putting up an impressive performance as any of her fellow countrymen. Anna Pardzhiani is an elite-level powerlifter who is blowing people’s minds with unfathomable feats of strength. This time Anna claimed a new PR by deadlifting 210 kilograms (463 pounds) for six repetitions.

Anna Pardzhiani’s six-rep deadlift was not raw, at least by powerlifting standards, as she used lifting straps to aid her in the set. Additionally, she also used a lifting belt, while her stance was conventional. Anna did not hold back from the start, as her first three repetitions went up very explosively. She started to slow down a bit after that, but still comfortably locked out the other three reps. After finishing the sixth repetition, a smirk of satisfaction lit up Anna’s face.

“I deadlifted 210kg for 6 reps yesterday. It was amrap set just for fun.

I’m not in prep now, so I can do more non-standard things like high jumps, box jumps and weightlifting exercises.

Also I increase volume in my powerlifting program👌🏻

I’m planning a deload period in July and then I’m going to start prep for comp 😌.”

Anna Pardzhiani did not specify her bodyweight at the time of the 6x 210-kilogram (463-pound) deadlift set. However, Anna takes part in the under 82.5-kilogram weight class, and usually competes at around 77 kilograms (170 pounds) of bodyweight.

Anna Pardzhiani is currently 25 years old, but she began competing professionally in powerlifting five years ago. Since then, Anna has racked up nine appearances in sanctioned competitions, of which she won six. Those wins include:

Anna Pardzhiani is slowly but surely building a humongous total, which will most definitely surprise everyone. Even though she is not preparing for any competitions, she is still playing around with a weight that many people would find serious. It seems like Anna will take part in at least one competition before the end of this year. If anything, she is well on her way to breaking multiple, if not all, of her competition PRs.