Check out this chest and bicep workout from top Classic Physique competitor Arash Rahbar. We also included a few videos where he discussed several topics. 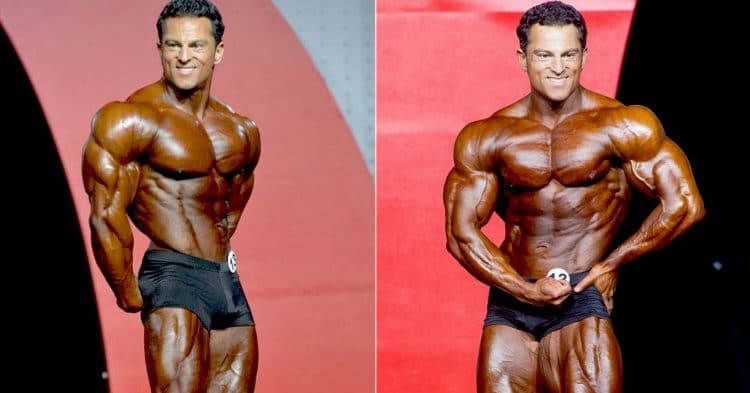 Top Classic Physique competitor Arash Rahbar was featured earlier today in ‘The Olympia Home Gym Series,’ where he did a live takeover on the organization’s Instagram page and took fans through his day during the quarantine. They also posted his chest and biceps workout routine which we’ve provided the details for below.
Rahbar has competed at the Olympia four times (2016-2019) with his best finish as runner-up in 2016. He also took second at the 2018 Arnold Classic Physique competition and placed 8th at the 2019 Olympia. Then his most recent competition was the 2019 Legion Sports Fest Pro Classic Physique of which he took first place.
Now, things have obviously been a little different than usual which has no doubt caused a lot of all-around uncertainty. But it’s definitely nice to see some positivity during tough times and that’s definitely what the community needs.

Below is the chest and bicep workout routine that the Olympia posted, followed by the clips of Rahbar performing each exercise. Note: We’ve provided a brief description for the exercises below each one.

The flat dumbbell press is an excellent overall chest builder. Not only will it pack on mass but you have more versatility with hand position and it allows for a deeper stretch in the pecs. Not to mention, it’s considered a unilateral (affecting one side) exercise. Therefore, you can identify and correct strength imbalances between your left and right side if needed.

The decline press is effective for emphasizing the lower portion of the pec or abdominal head. This is best achieved when the arms press in a direction lower than the chest. Many will also find that this exercise is easier on the shoulders which makes it a very ideal exercise for building and strengthening the chest muscles.

Dumbbell flys are great for really stretching out the pecs. But the adduction of the arms (moving the arms toward the center of the body) is where you really get the benefit. The pronounced contraction allows you to stimulate the chest muscles to a different degree than would a basic press.

Not to mention, the dumbbell fly promotes increased strength in the chest with the arms in a more outstretched position. There are many great benefits to this exercise.

The preacher curl is a very effective bicep exercise as is really gives you a good stretch near the elbow which also maintains the tension the muscle. But oftentimes when using free weights, the temptation is too great to rest at the top which removes a lot of the tension on the muscle.

It’s also possible that you don’t realize this is happening, especially if you’re a beginner.

So by using a preacher curl machine like Rahbar did in this workout, you prevent this from occurring as the machine is always pulling the weight in the opposite direction that you’re curling.

Check out: Incline Dumbbell Curl Vs. Preacher Curl: Which is More Effective?

The alternating dumbbell curl is a good way to train one arm at a time which again, also allows you to benefit from the unilateral nature of this exercise. And if you want to use a little momentum, then these are also great for overloading the biceps this way.

But quite possibly the biggest advantage of the dumbbell curl is that you can maximize the biceps contraction at the top of the curl due to the ability to rotate the pinky finger toward the bicep. This isn’t as possible with a barbell any implement that doesn’t allow for as much freedom of movement.

Concentration curls allow you to really isolate the biceps and probably more than most exercises. Don’t believe us? Research has proved this. Now, this doesn’t mean it’s the best bicep exercise however, it can definitely add to your development when done correctly.

By not being able to involve as many assisting muscles during this exercise, you’re able to better engage the biceps without taking a lot of the work away from them.

Rahbar is doing this on an inclined bench but it’s also performed in many different ways.

The last exercise to finish off the session was the standing bicep curl using an EZ or preacher bar. It really allows you to overload the biceps since you can go pretty heavy and it’s also easy on the wrists.

Opinion On Best Form of Cardio

Below is a more recent clip where Rahbar talks about what he thinks is the best type of cardio, based on what he has learned in his years of experience as a bodybuilder.

Well, he was very clear in that he believes HIIT (high-intensity interval training) is the best form of cardio for burning fat.

“I would have to say that HIIT cardio burns the most amount of fat period. There’s no argument to be had there.”

HIIT sessions involve multiple bouts of high-intensity, maximal effort activity followed by short recovery periods in between intervals. Rahbar mentioned in the video that it’s harder to do on machines but the spin bike is the best option out of other machines.

Rahbar will typically do 15-30 seconds of HIIT followed by a slower pace but it really depends on the activity. The more intense the activity, the more time he’ll need in between each burst of all-out effort.

“This type of cardio burns a tremendous amount of ft more than steady-state or any other conventional type of cardio,” says Rahbar. “But it also burn a lot of glycogen, carbohydrates in the muscle”. He explained that your diet may need to include more carbs although you’ll still get leaner and maybe even leaner than you were prior to incorporating this form of training.

He does not recommend doing HIIT fasted or anywhere close to your training sessions (before or after). If you do it when fasted, you’ll probably be breaking down more muscle tissue which is counterproductive to maximizing muscle gains, due to the lack of energy stores.

As a result, your body will use protein for energy when it should really be used to support the growth and repair process from resistance training. If you do it around training, you won’t have enough glycogen stores to be used effectively during training and if you do it after, it’d be similar to training fasted because the glycogen stores have been used up.

Rahbar said that a lot of bodybuilders don’t usually do HIIT because it’s very taxing and tiring. However, it’s a good strategy for them, especially when compared to steady-state cardio. He says that the latter form of cardio is easy for people to become efficient at and while this is good for some people, it’s not ideal for bodybuilders.

Rahbar also said that HIIT aids in growth and builds different muscle fibers aside from being very effective at shredding fat. He ended by saying to not do too much at first when doing cardio and to start out small.

“Rule of thumb is that you want to do the least amount of work to get the most amount out of it. Same thing with your work”.

“The less cardio you do to get your results and gains the better off you’ll be because you’re not only wasting a lot of time (doing excessive cardio) but you’re going to drain yourself.”

Russel Orhii Shares His Off-Season Workout, And It Is Harder Than You Think