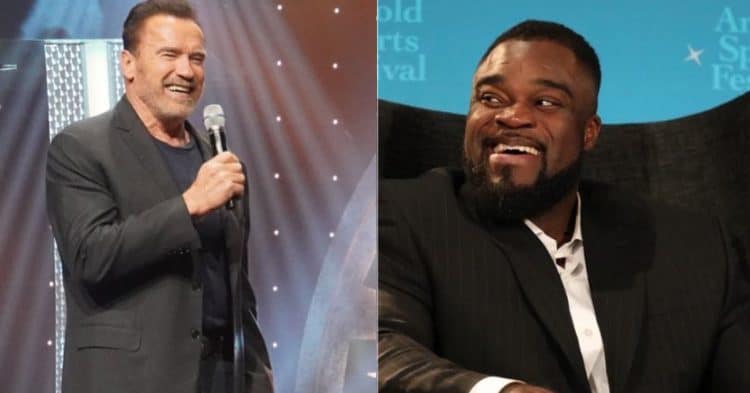 Brandon Curry is clearly one of the best bodybuilders in the world today. However, even he can take some advice from the great Arnold Schwarzenegger.

The resume of Arnold Schwarzenegger speaks for itself at this point. Not only has he won Mr. Olympia seven times, but he has gone on to become one of the biggest ambassadors for the sport. This does not even include the influences he has had outside of bodybuilding.

Therefore it is safe to say that Arnold commands a certain kind of reverence when he speaks to a room. This was put on display at the Sunday Showcase over the weekend. The event, which closes the Arnold Sports Festival, featured several important figures, including current Mr. Olympia, Brandon Curry.

Schwarzenegger shares some kind words with Flex Wheeler, before directing his attention to Curry. As this video from Brandon shows, Arnold offered some sage advice to the young champion.

“First of all, when you take photographs, try to stay within the frame,” Arnold joked. “It can be a classic photograph of you. I always laugh at a picture of a lat spread, with your deltoids, and an inch of the deltoids are missing because the page wasn’t wide enough.”

Arnold continued to joke, saying that could be a reason to boast about how big your arms are. However, he then switched to a slightly more serious note, with him telling Brandon is doing a great job. However, Curry wanted to reaffirm that this was about William Bonac, who won the Arnold, rather than himself. Nevertheless, Arnold expressed hope and desire for Curry to compete in Columbus sometime.

This is certainly a change in pace from some of the comments made about Curry recently. Although Schwarzenegger may feel Brandon is doing a good job, but others like Dorian Yates and Ronnie Coleman have been critical of Curry, and other modern competitors. However here, Arnold chooses to take a more encouraging approach.

Arnold Schwarzenegger concluded by encouraging Brandon Curry to be an inspiration to others in his pursuits of greatness. It was truly touching to see one of the best right now, sharing a moment with one of the best of all time.