Watch Arnold Schwarzenegger And Lebron James Music Duel: Who Has The Better Playlist?

The two legends go at it to see who has the best warm-up tunes! 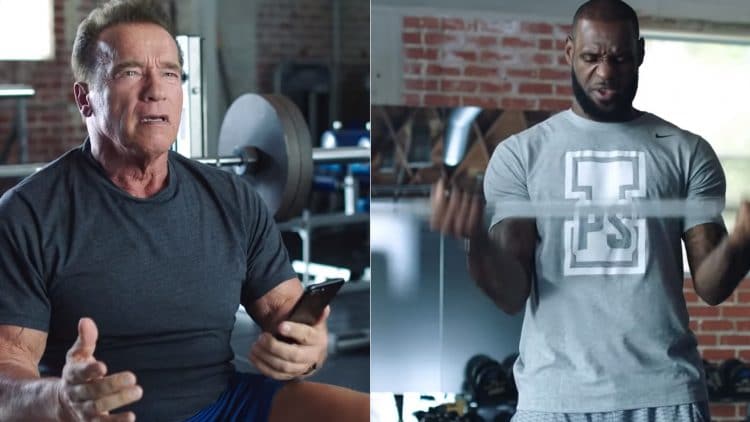 It’s no secret that Arnold Schwarzenegger and Lebron James have teamed up along with Cindy Crawford and Lindsey Vonn to introduce the supplement company Ladder which was created to “customize” sports nutrition for each individual.

But, along with a supplement company comes ads to promote the products and this duel between Arnold and Lebron was interesting, to say the least.

In the ad Arnold just finished a set of bench presses and saw another guy working out so he decided to play some old school music. Then, LeBron was doing some barbell bicep curls and had DJ Khaled as his, well… DJ… and personal trainer.

Arnold then responded with some German Folk music in the form of a live band when Lebron and Khalid stopped to look at at the noise going on from the band.

Check out the video for the Ladder ad below:

“This is an ad, and I don’t share ads on Reddit. But it’s funny, we had a great time doing it, and it’s our own company, not an endorsement deal, so I’m breaking my rules today.”

“I’m going to work on my playlist. When I train at Gold’s I actually don’t listen to music because I am either completely focused with my mind in the muscle I’m training or joking with my training partners. But at home, I put on music.

LeBron’s a great guy. I told him stories about training with Wilt Chamberlain back in the day, and he couldn’t believe it. Wilt used to do triceps extensions with the full stack. LeBron is really, really strong too. A monster.”