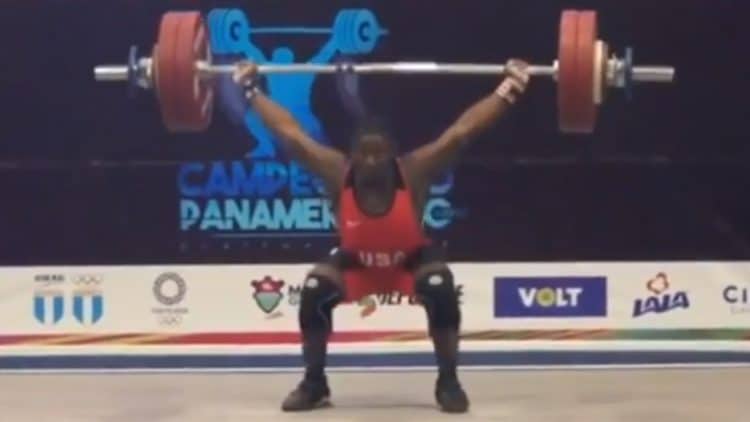 After day one of the Pan American Championships in Guatemala City, Guatemala, Team USA won a total of five medals. Alyssa Ritchey won Gold and Morghan King won bronze overall to finish on the podium but day two was even more impressive with CJ Cummings settings 15 records in the 73kg weight class.

Now, CJ opened with a 144kg snatch, then completed a 150kg for a second attempt and finished with a 153kg snatch for gold which set multiple records. He then followed this performance with 182kg clean and jerk for his first attempt, followed by 187kg for his second attempt. He then finished with a 191kg clean and jerk for his third attempt, which gave him a 344kg total to earn himself three gold medals on day two and multiple records to his name.

And here he stands on the top spot of the podium…

CJ Cummings has pretty much written his ticket to the 2020 Tokyo Olympics with his incredible performances and it’ll be exciting to see his progress leading up to the big World competition. Now, the Pan Ams is a gold medal qualifying event which will carry a lot of weight going into next year’s Olympics, so keep your eye on the best performances for a possible sneak peek into the athletes who will receive an invite.

4 Strength Tips For Guarding Your Back

Watch Arnold Schwarzenegger And Lebron James Music Duel: Who Has The Better Playlist?

Junior powerlifting champion CJ Cummings sinks another personal best with his most recent clean and jerk at 429lbs/195kg. The lengths...

If you haven't yet heard of CJ Cummings (Clarence Cummings Jr.) then let us introduce you to one of the...

CJ Cummings is one of the best -73kg weightlifters in this generation. He firmly cemented his place there, with an...