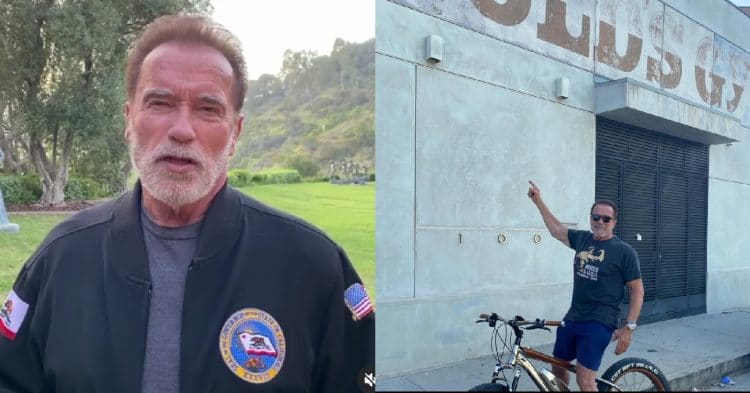 For a long time, Gold’s Gym and Arnold Schwarzenegger were synonymous with each other. Recently the bodybuilding legend got to experience some nostalgia, when he stopped by the original Gold’s Gym for some reminiscing.

It is nearly impossible to think of the legendary Gold’s Gym, without thinking about the equally iconic Arnold Schwarzenegger. He has been a major figure for the gym for decades, leading the company to being one of the premier spots for bodybuilders looking to pump iron and hone their craft. While things have certainly seen a decline over the last few years, there can be no denying how influential the original Gold’s Gym was, not just for the former California Governor, but for the sport as a whole.

Nowadays Arnold does most of his training and exercising at his home gym, where he can work out with his pet donkey. That being said, he is still a big fan of taking bike rides around the area to do some cardio and enjoy the sun. It was one of these recent bike rides that led him back to the original Gold’s Gym. A recent post to his Instagram saw the 73-year old reminiscing about his many hours spent in this facility, reflecting on how important this gym was to his development as a bodybuilder.

“I love stopping on my 12 mile bike rides to enjoy some of my fantastic memories. When I ride by the original Gold’s where we shot Pumping Iron in 1975, I can almost hear the weights clanging around and smell the sweat. I can feel the joy of the friendships I built here. It’s so important to remember where you came from, and all of the people who helped you along the way.”

Recently, Schwarzenegger has been rather displeased with the way Gold’s Gym is being run. He has expressed displeasure with what he felt was lacking mask restrictions, when they reopened in light of the recent global pandemic. However it seems that he has still not forgotten how important this gym is to him, despite his disagreements with current procedures.

While there is no overstating the fact that Arnold Schwarzenegger has long since outgrown his time at Gold’s Gym, it is clear that those memories are still important to him. He would definetly not be the same person he is today without his time spent at this gym, and the relationships that he built from training there.