Strongmen from all around the world compete in Africa

While we wait for the World’s Strongest Man competition in June, Arnold Strongman Classic world tour is coming to South Africa this weekend! This will probably be the main WSM preparation for most of these guys so they come in all guns blazing in one months time.

So…without further ado, let’s see who’s gonna be competing and in what events.

The top list of names are guys that were main stars of the Arnold Strongman Classic in Columbus Ohio few months backs( minus Thor who is now a zombie on tv and Brain Shaw) while the rest are all, you’ve guessed it, Strongman from other countries.

For instance, Patrick O-Dwyer is the Irish version of Thor Bjornson, down to the bald hair cut and the tattoos and Jitse Kramer is a 2x time Holland’s Strongest Man and  a’17 and ’18 Arnold South Africa runner up.

The events are the following:

Mateusz should be the favorite to win this entire event, that much is a given. The young powerhouse from Poland has been breathing down Bjornsson’s neck for some time now and the two are separated by a few points in most cases. However,the deadlift has been his kryptonite for some time now and if they will go up in weight until they get a clear winner…Mateusz might be losing some crucial points here. Which is where I’d say Pritchet could come in and sweep up some points. Also, let’s not count out the newcomer, Oleksii Novikov. He won Arnold Strongman South America and placed 7th in Columbus Ohio. Which, I know doesn’t sound that impressive but he behind him were Brian Shaw, Jerry Pritchet and J.F. Carron. All veterans of the sport and (in case of Brian) former champions.

Of course, the stakes here are as high as they ever were because the winner of this competition gets “dibs” on entering Arnold Strongman Classic in Columbus Ohio next year and competing against the big boys. 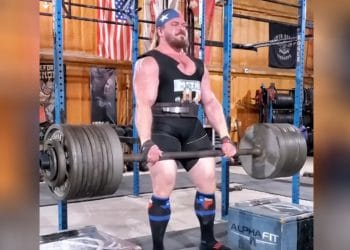