No Result
View All Result
TrainingOP-ED 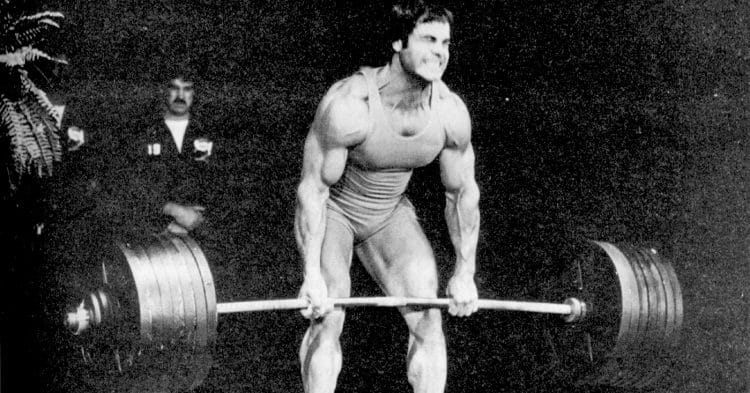 We’ve said it a million times and we’ll say it again, the deadlift is the ultimate full-body movement. It requires head-to-toe muscle involvement and is the biggest test of human strength. Well… there goes two of the benefits of the deadlifts on our list right there.

Don’t worry though, we’ve got plenty more for you. Now, before we go any further, we understand that not everyone can do the deadlift. And some people do better with variations rather than the conventional straight bar deadlift.

Although, we definitely believe many lifters can learn how to do it safely and effectively in its most basic form. And if you’re capable of including the deadlift (or any of its variations) in your workout routine, this list was made for you…

Most people who are familiar with the deadlift already know, for the most part, what it has to offer. But maybe we can provide information on how effective it is overall.

1. It builds a massive backside

We’re not just talking about your butt here (although, it’ll definitely get bigger), but the “backside of your body” is actually used to describe the posterior chain. This encompasses the rear muscles from the calves, to the hamstrings, glutes, back, core, and shoulders too.

Sure you can build some muscle doing leg curls, rows, pull-ups, and rear delt work. However, when you learn how to do heavy deadlifts, you’ll build size you didn’t even know you were capable of having.

And if you were wondering whether or not deadlifts build the front side of the body too, the answer is yes. Although, not to the same extent as it will the backside with there being a few exceptions that we’ll explain further later on in the article.

Closed chain exercises involve the feet, hands, or both being in contact with a surface to where they’re fixed and cannot move during the exercise.

And therefore, the movement is facilitated from where the hands, feet, or both remain immovable.

For example, during the deadlift, the movement starts from the feet and continues to move up the “kinetic chain” (muscles and joints) until the exercise is complete.

The benefits of closed chain exercises include… (1)

The deadlift is much more than just a powerful exercise as you can see.

3. They make you a stronger human

Want to get as strong as you possibly can? Start deadlifting!

Science has proven that lifting heavy weights is a must for building strength. Well, the deadlift will allow you to lift the most amount of weight that your body is capable of lifting. That’s because you’re pulling off the ground and as previously explained, using essentially every muscle in your body.

And to extend upon the previous point, it’s a closed chain lift, which promotes much better overall strength from head to toe.

Aging results in gradual bone loss over time. However, strength training has shown to decelerate this process and even strengthen/build new bone mass. (2)

Research has shown that resistance training is a viable strategy for counteracting the effects of Osteosarcopenia. And compound exercises such as the deadlift can be especially beneficial for the strength of the hips and spine which are often a problem area. (3)

OK, so before you ask how this could possibly be a good thing, here us out.

We’d venture to say that most people probably don’t look forward to doing deadlift since they are taxing on the body and require a lot of effort. But you’re getting a lot more than just strength when you decide to incorporate deadlifts in your training regime.

It’s one of the greatest exercises you can do to build mental fortitude. When there’s something you know you need to do but your mind makes you question if you really want to because it’s challenging, then that means you should do it.

We mean ‘when done properly,’ deadlifts can make you more resilient…

If you want to experience all of the benefits of deadlifts, you mustn’t compromise form which means lifting within your capabilities. Trying to go so heavy to where you’re just pulling with everything without regard to body position is not advised.

But deadlifting properly will make you tougher all around by strengthening your muscles and joints. So your neck, spine, back, hips, knees, and ankles become more resilient to physical activities that typically cause injuries. Deadlifts can also help to identify weaknesses (caving knees, weak hips, lack of ankle mobility, etc). so you can correct them.

In one study where 35 participants with mechanical back pain performed the deadlift for 8 weeks, it was determined that those with back extensor strength and endurance and a sufficiently low pain intensity level benefitted most from the movement. (4)

It likely won’t benefit those with more intense disabilities and pain but that’s a whole separate issue. However, it will strengthen the lower back and other areas making you better equipped to handle more.

Deadlifts don’t just make you stronger and more powerful on the ground, but according to scientific literature, they can increase your vertical jump and explosiveness in general. (5)

One review of a study published in The Journal of Strength and Conditioning Research found that the deadlift improves explosive strength of the knee extensors and flexors. This was determined after ten weeks of training with 20 sessions and 5 sets per workout.

However, it was noted that this could be the case only for athletes or for those who utilize other exercises such as squats, power cleans, etc.

But this is still some very interesting and possible beneficial information for those looking to improve physical performance.

8. There are many variations

Because there are many different variations, more people can experience the benefits of deadlifts. For example, the trap bar and sumo deadlift can be a better option for those with longer limbs and less than optimal back/erector strength.

That’s because the lifter can remain more upright throughout the movement while keeping the weight closer to their center of mass. And with the Sumo deadlift, for instance, your feet are spread out farther apart which means the bar has less distance to travel.

Now, if you’re a competing powerlifter or even a weightlifter, then you’re going to have to work on back extensor strength and joint mobility because there’s no way around doing it the conventional way with a straight barbell.

Shorter lifters tend to get the bar off the ground a bit smoother. But taller lifters can definitely improve this area. This is evident by the fact that Strongman athlete Hafthor Bjornsson, who at a height of 6’9,” recently broke the all-time deadlift world record by pulling 501kg/1105lbs off the ground.

He failed an attempt with the same weight just a year earlier and was known to have issues with the bottom of the lift due to his height. So he worked hard at it and made it a goal to pull more than any man ever has in history… mission accomplished!

But if you’re a regular gym-goer, there are so many variations you can do from using dumbbells to cables, trap bars, different grips/widths, etc.

9. Deadlifts have amazing carryover to other lifts

The snatch and clean and jerk depend on a strong pull from the ground. Otherwise, you’re not getting hundreds of pounds off the ground, much less over your head. So the better, stronger, and more efficient you are with the deadlift, the better you’ll perform in these other lifts which are typically done in weightlifting.

But because deadlifts also strengthen the hips, your squats and any movements that involved thrusting of the hips, will also benefit greatly. Then of course, as explained previously, the deadlift is capable of increasing explosiveness due to stronger knee extensors and flexors.

So, if you’re a weightlifter or someone who desires to have better lower body power and function, the carryover of this superior movement is well worth progressing with it.

10. They’re a suitable replacement for squats

This one is an extension of the first benefit on our list which was “building the backside”. And we said there were a few exceptions where it builds the front side as well. Well, the quads, in particular, are what we were referring too.

The deadlift can build as much size as the squat and it can even be a better alternative for people with limited lower body joint mobility. However, it’s also more taxing and not as specific as the squat for the legs.

But you can really load up on the deadlift and take advantage of what it has to offer regarding both strength and development.

There’s nothing more effective for building an iron grip than simply holding a heavy weight in your hands and trying to keep it there. Do you notice how when you first started training, you didn’t have much of a grip. But then as you continued to handle the heavier weight, your grip developed naturally… like how could it not?

But it won’t only benefit your deadlift performance. Your pull-ups, curls, push-ups, etc. will also get much easier and your wrists will be stronger as well.

It’s important when deadlifting to try and keep the bar in the palm of your hands though as you don’t want to cause issues with your fingers. However, for quick feats of strength, it’s generally not frowned upon.

Thoracic extension is vital for being able to lift safely and effectively. A rounded back is never a good thing when lifting heavy poundages as it for one, impedes your performance, and secondly, it can cause something called thoracic outlet syndrome which is a compression of the upper torso.

This can lead to numbness in the fingers plus pain in the shoulders and neck. And bad posture can cause this even without lifting heavy weight which shows how important good lifting posture truly is.

When deadlifting, you have to keep your shoulder blades back, chest up, back straight, and bar close to your body. This is conducive to a good lift. Going too heavy will compromise proper form and is dangerous for the reasons we’ve just discussed.

The benefits of deadlifts are pretty obvious based on our list. Anyone capable of doing them can experience improvements in many different areas. Although, we’re definitely not saying they’re for everyone because that’s not the case.

It’s a lift that needs to be done safely and with proper form as not doing so can be dangerous. But as with any exercise, we learn and we make improvements. Just make sure to lift according to your abilities and remember, making progress is a marathon, not a sprint.

A lot of people like to make big jumps in weight trying to impress or compare to others. But that can be very costly. So, take your time and enjoy the journey.