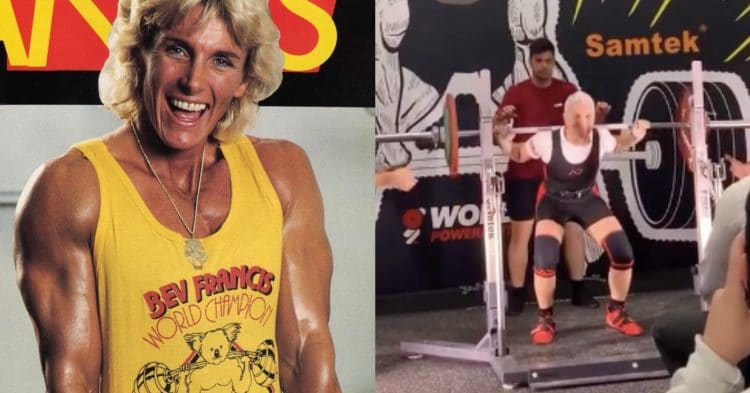 Bev Francis is something of a legend in the world of strength sports, owning one of the most famous gyms out there. She recently made her return to powerlifting and made a major splash in her comeback.

The last time that Francis made an appearance as a powerlifter was in 1985, dealing with a plethora of injuries that stopped her from being able to consistently compete. Since then, she has become known for her Powerhouse Gym, being dubbed the “East Coast Mecca” where multiple Mr. Olympia champions including, Jay Cutler, 8x Olympia champ Ronnie Coleman, as well an actor Dwayne Johnson and powerlifters, come to New York to train there.

Related: Bev Francis And Steve Weinberger: The Most Dominant Couple In Bodybuilding

However Bev decided to dust off the old powerlifting suit, and make a return to competition 36 years after her last meet, by competing at a drug tested meet for Powerlifting Australia. Here she appeared in the 65-69 year old age group for the 64kg division, where at 66 years old, she was able to get a total of 6 new world records, breaking and then re-breaking the records in squat and total, as well as setting new records for her bench press and deadlift.

Here is a breakdown of Bev Francis’s best lifts at Powerlifting Australia:

Check out the video of her lifts below, courtesy of the Flex Magazine Instagram page.

With three and a half decades since her last competition, it is insane to see that Bev Francis was able to return to competition and demolish this kind of weight. On top of that, she made breaking the world records look easy, by doing so on multiple occasions, using her opening lift.

This only becomes more incredible when you consider the amount and type of the injuries that she has dealt with over the years. According to Flex Magazine, she has had rotator cuff shoulder surgery, both wrists carpal tunnel surgeries, six arthroscopic knee surgeries and two full knee replacements, so for her to be able to return in general is amazing, much less perform the way that she did.

Of course, Bev is known for more than just her powerlifting skills, as she was also an accomplished bodybuilder, competing for the Ms. Olympia title on six occasions, being the runner-up twice, and coming in third a further three times. Additionally, she won a few other contests, including the IFBB Pro World Championships, before becoming something of an ambassador for the sport.

It is unclear if she will be continuing to compete, following in the steps of athletes like Rudy Kadlub and others, competing later in life. Either way, it was a pleasant surprise to see Bev Francis competing once again.

The 13 BEST Battle Rope Alternatives for Fitness and Fat Loss