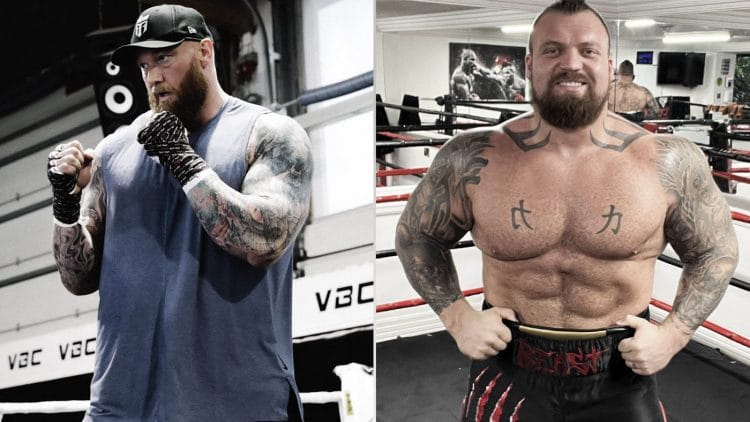 Strongmen turned professional boxers Hafthor Bjornsson and Eddie Hall’s feud has taken a new turn in the online one-upping game. The pair is expected to settle their age-old beef in the boxing ring in early 2022 and have left no stones unturned to win the psychological battle in the build-up to this fight.

In a video uploaded on Eddie Hall’s Youtube channel on October 23, the Brit issued a $100,000 wager to Hafthor Bjornsson. Hall suggested that the loser of their boxing match will donate the amount to a charity of the winner’s choice. However, Bjornsson refused to reciprocate and Hall raised the amount to $200,000.

Following Hall’s new wager, the situation took a different turn as Hafthor Bjornsson proposed that they both donate $200,000 to a charity irrespective of the outcome of the fight. The stakes were raised once again as Eddie Hall responded:

In the most recent chapter of the one-upping game, The Mountain tried to put an end to this argument. However, he took a cue from another crossover boxing match in doing so.

Hafthor Bjornsson posted a video on his YouTube channel in response to Eddie Hall’s $1.2 million challenge. Thor expressed his reluctance to use charity as a prop to promote the fight and stated:

“I don’t think we have to brag about donating to a charity online. This is the last time I am going to speak about that online. I hope you’re going to do the same thing.”

Both Eddie Hall and Hafthor Bjornsson have already claimed that the undisclosed purse for their boxing match will be in the seven-figure territory. Thor admitted that it will be irresponsible to accept a $1 million wager. However, he presented an offer that would leave a lasting impression on the loser’s mind and body for the rest of his life, quite literally! Hafthor Bjornsson stated:

Retired MMA champion Tyron Woodley and YouTuber-turned-professional boxer Jake Paul agreed to a similar wager before their boxing match earlier this year. Bjronsson was seen hanging out with Jake Paul’s brother Logan Paul on his podcast a few weeks back. So, the suspicion about the source of the idea is not completely unwarranted either!

Nevertheless, both Hafthor Bjornsson and Eddie Hall have garnered widespread appreciation for their progress in boxing training. Irrespective of the drama and trash-talk in the build-up, we can be certain that the heaviest boxing match in history will deliver as advertised.